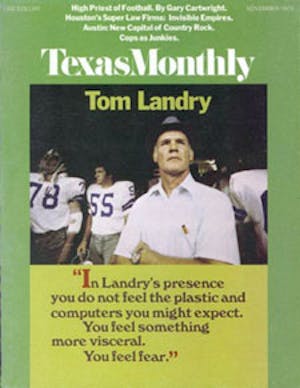 YOU PROBABLY THOUGHT THE LAST time Cowboy Bob fired umpteen shots out of his six-shooter, laying waste to all the guys in black hats, looked romantically into the eyes of the school marm, then kissed his horse and rode into the sunset singing a song was in some horse opera made 30 years ago and is now only a fit subject for TV-watching insomniacs and masochists.

Yep, pardner, and if that’s what you thought, it’s because you don’t speak Spanish, because you’ve never been inside some place like the Alameda Theater in San Antonio, and because you aren’t a part of a vast film underground that includes some 200 movies in theaters in Texas—not the usual type of film underground out-of-it cities like New York and Los Angeles produce where movie freaks with 16 mm eyes stare appreciatively at Andy Warhol’s four-hour extravaganza of a friend of his asleep in bed. No, it’s a different type of underground, built around a cult of worshippers of Cantinflas and Tony Aguilar, names that at best only ring a faint bell with most movie goers.

They are worshippers of a movie world that hasn’t existed in U.S. films for 25 years, a world of romance and slapstick, singing cowboys and baggy-pants comedians. It’s a world where people still believe the purpose of movies is escape by spending a couple of hours in a never-never land. It’s a world that in the U. S. for the most part, lives only in Texas and it’s a world whose sustenance is movies made in Mexico and shown, sans English subtitles, in the U. S.

You can find the world in about 200 theaters in Texas, in border towns and fairly well Anglicized cities like Houston and Dallas, according to Arnulfo Arias, assistant manager of Aztec Films, which distributes Mexican movies for the Mexican government in the United States. Azteca imports about 80 films a year, mostly in Texas with a half dozen outlets in Louisiana and Florida. Columbia Pictures also distributes about the same number of movies each year with outlets in Texas, California, and other Southwestern states and New Jersey. But Texas remains one of the capitals of the Mexican film world.

Most of the films find their way to theaters like the Alameda, located in downtown San Antonio surrounded by stores and restaurants catering largely to the city’s predominantly Mexican-American population.

Like the films it shows, the Alameda seems a throwback to a different world. In contrast to the sterile, functional boxes that are built as movie theaters today, the Alameda is one of the last examples of the opulence that was standard for movie theaters built before the advent of television.

The 2500-seat theater has its own inlaid sidewalk in front, introducing theater goers to a semi-art deco lobby, complete with sculptures, etched glass along the curving stairways and giant painted murals inside the auditorium. The Alameda, which cost $1 million to build in 1949, is a living fossil of a nearly extinct species, the movie palace, the type of theater that was built when people thought the decor of a movie theater had to match the storybook dreams of the films that were seen in them.

It’s a magic formula that still works, according to Oscar Elizondo, manager of the Alameda. The theater, particularly if it is showing films with Cantinflas or Aguilar, packs in patrons from Spanish-speaking San Antonio.

When you first step into a theater like the Alameda, which is one of the better maintained theaters, the mingled smell of popcorn and disinfectant strikes your nose. The concession stand is doing big business selling the same kind of candies and Coke that you’d find at the English-language theater down the street. Then you notice the difference is, of course, that there are no Anglos, and there are surprisingly few teenagers. “We get the older people, and they bring along the little children and grandchildren. But the ones from 15 to their 20’s, they go to the English movies,” Elizondo says. Go into the seating area and the first thing you notice is an atmosphere of seriousness. There is not the rustle, the movement and the conversations that go on inside other theaters; it’s as though this is an important event, due the respect of attending Mass.

The theater, especially until recent changes in the Mexican film industry, shows the movies with the kind of romance American movies, particularly westerns, used to offer. Antonio Aguilar, for example, rides a beautiful palamino, dresses in a costume that stops short of the unreality of Roy Rogers’ embroidered shirts, but which still has little relationship to what charras really wore in the Mexican west. And most importantly Aguilar is the good guy, fights fair, always wins and somehow manages to work in a few songs.

Aguilar is the favorite hero of the audiences that attend the Spanish-language theaters, but even he is not as populalr as their favorite comedian, Cantinflas. With his baggy pants, fumbling manner and shy way with the ladies, Cantinflas is reminiscent of Chaplin. “He always plays the same character,” Elizondo says, “the little fellow struggling to get along in any kind of job.” A Mexican schlemiel, Cantinflas is known to most U. S. audiences only for his parts in “Around the World in 80 Days” and “Pepe,” but he is keeping alive a classic comic character.

And the peliculas Mexicanas have another favorite type of star, a hero that originated in Mexico, and at least until the advent of the Hong Kong Kung-Fu movies, was a type of hero unique to Mexican cinema. He is the masked wrestler taken from the canvas mat and transported with all his drooping fat, grunts and groans and the mystique of anonymity to the Grade-B screen. They are not the type of movie that even the most addicted Mexican movie fan is likely to brag about. Roughly equivalent to a cross between U. S. monster movies and Superman serials, they depend on a lot of action with as little connecting plot in between as possible. In a movie such as “Santo y Blue Demon [two wrestling stars] Contra Dracula y El Hombre [Werewolf],” the use of language, whether Spanish or English, doesn’t really matter. But they are the type of films that still inspire hero worship in the kiddies who wear the same ski-styled masks of the wrestlers as they chase each other down the aisles.

But these types of films—the romantic adventures and the slapstick comedies—may be going the way of U. S. movies.

“The charro movies are going the same way of Gene Autry and Roy Rogers,” says Elizondo. “They’re fading into the sunset. Now the same thing is happening to the Mexican movies that happened to American movies: too much sex and too much violence. I’m having a harder time finding good family movies.”

Many of the new Mexican movies are unabashed imitations of U. S. films and of the cheap, Italian or spaghetti westerns. The new westerns, which don’t include Aguilar, are so imitative of the movies aimed at the general American market that—while they are made in Spanish—the characters have names like Morgan and Bradfield, and the sets are in the U. S., complete with shingles hanging outside a jail with the words “U. S. Marshall.”

And as with most cases of imitation, sooner or later the imitator hits the lowest point of what he is mimicking. In the case of Mexican films, it’s likely to be “The Night of the Thousand Cats,” made by a Mexican director under the influence of “Willard,” the U. S. horror film that starred a hoard of human-devouring rats. The Mexican director copy-catted “Willard” by converting the rats to felines, who, as the cliche goes, had sampled human flesh and could thereafter not be satisfied with mere Puss ‘n’ Boots.

All is not downhill in Mexico, however. Azteca assistant manager Arias pointed out that the Mexican film industry has been partially nationalized and that more money is available for films. More of the movies are being produced in color, and the subject matter is covering social dramas, sophisticated comedies and biographic movies. Recently the first Mexican movie costing $1 million was made, dealing with the first Spaniards in the Americas.

And the more serious film makers in Mexico are trying to gain some of the same recognition in the U. S. that other foreign film producers have received. One of the best examples, for both its quality and its insight into how Mexican film makers feel about their place in relation to American films, is “El Aguila Descalza” (“The Barefoot Eagle”), written and directed by and starring Alfonso Arau. The comedy about a fumbling comic strip-type superhero with a secret identity, mixed satire of Mexican society with fun poked at American films. Among the U. S. cliches that take an almost bitter ribbing from Arau are the Lone Ranger, gangster films, the Three Stooges, “The Caine Mutiny Court Martial,” Busby Berkeley, Erroll Flynn (in a duel with pogo sticks) and the Sennett comedies (in which bags of heroin instead of custard pies are flung in characters’ faces). It’s almost as though Arau is taking his vengeance on American U. S. films audiences for ignoring Mexican movies.

“But the next wave of Mexican films is not greeted with universal warmth. Alameda manager Elizondo, for example, deplores the new films for their use of sex and violence, which, like a parent making excuses for a child who has picked up bad habits, he blames on the Mexican film makers being influcenced by the naughty playmates north of the border.

“It’s the movies with sex that do all the business anymore,” he says.

Elizondo believes the unashamed romanticism of Mexican movies is headed for the last round-up. If he’s right, it will mean anew audience at many of the theaters in Texas, bound to audiences in Mexico not so much by a common reverence for romance, but by simply a common language.