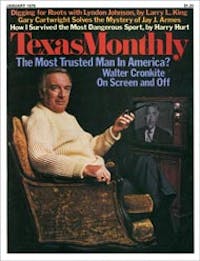 Winston Churchill was always invoking history in his behalf, claiming that future generations would vindicate his actions. When asked how he could be so certain of history’s benign judgment, Sir Winston replied that he intended to write it.

Churchill knew all too well the dangers of allowing the writing of history to fall into the wrong hands. Unfortunately, we here in Texas have not learned that lesson. We have entrusted our past to, of all things, a government agency (the Texas Historical Commission) and have learned exactly what one might expect a government agency to tell us. Historical markers all over Texas tell of pioneer families and Indian raids, of early commercial ventures and important buildings, of abandoned settlements and country churches—an endless collection of detail that yields only a hint of the rich fabric of Texas history.

The trouble with leaving history to bureaucrats is that we get a one-dimensional view of our past. We get an orthodox serving of the ordinary. One can read historical markers from El Paso to Orange without finding much mention of the ribaldry and rascality that has enriched Texas for generations, and in the process, had quite an impact on our— alas, unwritten—history. We therefore propose four historical markers that may begin to restore some balance.

Reeves County is not the most varied landscape in the world. To the uninitiated, most of it looks pretty much the same. And that’s certainly the way it appeared to an insurance investigator who came out to Pecos to check on all those ammonia tanks Billie Sol Estes had put up as collateral for $34 million in loans.

Billie Sol’s problem was that most of the tanks didn’t exist. All he really had was a lot of plates with serial numbers on them, but only a few tanks to put them on. So when the insurance investigator turned up, Billie Sol had to do something. He decided to hire a crew to switch serial number plates on the few tanks he did have, while he was driving the investigator back and forth over county roads in between trips to the tank site. By the end of the day a bored investigator had accounted for all the serial numbers on his list and was no doubt convinced that West Texas had the dullest scenery in all of creation.

Billie Sol got away with it that time, but eventually Oscar Griffin, Jr., edi­tor of the Pecos Independent & Enterprise, started checking him out. The result was a Pulitzer Prize for Griffin, a jail sentence for Estes for mail fraud and swindling, and an inglorious end to one of the more imagi­native get-rich-quick schemes in Texas history.

In its heydey Galveston’s Balinese Room was the most glamorous nightspot in Texas. On the long, narrow pier that extended far out over the Gulf of Mexico were a first-class public restau­rant and an exclusive private club where Phil Harris, Sophie Tucker, and a host of other big names performed regularly. But the real action was in a plush room at the end of the pier. There, almost a quarter-mile from shore, the sound of dice games and roulette wheels and clinking chips lasted into the early hours. The Balinese Room was the finest casino in America.

It was wholly illegal, of course, but the authorities looked the other way until Texas Attorney General Will Wilson shut it down for keeps in 1957. By then it didn’t really matter; the Balinese Room’s finest days were past. With the advent of the Air Age, Galveston was finished as a rich man’s playground, and the action moved to Las Vegas, the Caribbean, even Europe. Today the Balinese Room survives as a dinner theater, a tame reminder of days when high rollers like Silver Dollar Jim West would arrive with a police escort, and the Balinese Room was truly the best show in town.

The contents of this ballot box were the hottest topic in Texas for a few days following the 1948 Democratic Primary for United States Sena­tor. Former Governor Coke Stevenson and an ambitious young congressman named Lyndon Johnson were locked in a desperately close battle for the nomination. When the votes from across the state were counted, only 114 votes separated the two men. Then one precinct announced it had found some “uncounted” ballots—this one, Box 13 at the Nayer Elementary School in Alice, Jim Wells County. When the box was recanvassed six days after the election, it reported 202 additional votes for Johnson and only 1 for Stevenson. The results tipped the election to LBJ by 87 votes, earning him the nickname “Landslide Lyndon” and immortalizing Box 13 in Texas political lore. A subsequent check of the voter registration list disclosed some rather improb­able names among those who had cast ballots. Lyndon Johnson, it seems, had been elected senator by a group of dead men, who had risen from the grave to cast their ballots in alphabetical order.

All ye who mourn the Chicken Ranch: shed a tear for Hattie’s Place, which in its time was the grandest of them all. For three de­cades, from 1930 to 1960, Hattie catered to the wants and needs of Austin’s male population. Her most faithful clients were the members of the Texas Legislature, and her employees knew more about politics than most Washington hostesses. Whenever a legislator was missing for a key vote, the first call would invariably go to Hattie, asking her to send the miscreant home. Occasionally state troopers had to drive out to the two-story limestone house on the old San Antonio Highway to drag recalcitrant politicos back to the Capitol.

Old-timers say Hattie’s was never the same after the original build­ing burned down during the early Fifties. After a brief sojourn in a ranch-style stone house south of town, she settled in the uninspiring M&M Courts just south of the city limits on Congress Avenue. But no matter how the exterior appeared, the interior of Hattie’s Place was always lush and lavish. She ran an elegant house and tolerated no violence. Hattie carried herself like a lady and would have been on any list of the best-dressed women in Central Texas. A shrewd, power­ful businesswoman, Hattie made a fortune and had the respect of the community—including, apparently, a long line of Travis County sheriffs, until one finally shut her down for good.