It was one heck of a weekend to love University of Houston football.

On Friday night, Iowa State upset the number two-ranked Oklahoma State, leaving the Cougars as the only undefeated team in America aside from number one-ranked LSU. Then on Saturday morning, ESPN’s “Game Day” visited the UH campus, and amidst the madness, Lee Corso, the station’s grand old clown of wearing mascot heads to predict the day’s winner, started to pretend to opt for SMU, then exclaimed “F—k it!” to the live national television audience before putting on a Cougar head. (If you need a warning about the video below, you’re not paying very close attention).

And yet even after beating SMU, and even after the losses of Oregon and Oklahoma—two teams which had been ranked above them in the BCS standings—11–0 Houston and its record-setting quarterback Case Keenum are still just eighth in the Bowl Championship Series standings, behind six teams that have one loss.

ESPN’s Mark Schlabach, like almost every college football pundit in America, predicts that Alabama, which already lost a 9–6 overtime game to LSU a mere two weeks ago, will get a rematch in the national championship game. Schlabach thinks the Cougars are still on track to play in one of the other BCS bowls, but he doesn’t include them them in the national championship conversation.

“It’s time for all the Bowl Championship Series (BCS) critics, for the writers and coaches who vote in the polls even as they whine about the system, to embrace this bit of fairness, to make Houston the No. 2 team in the country in their rankings. If a 13-0 team is going to be denied a title shot, it must be blocked by the computers.”

Unfortunately, that’s exactly what would happen. Houston is actually ranked seventh in the two human polls that help make up the BCS (the Harris Poll and the USA Today Coach’s poll), but their average ranking from the six computers is just twelfth. That’s because the computers are a lot tougher when it comes to strength-of-schedule, and as Brian Fremeau of ESPN’s Football Outsiders argued, Houston’s is just far too moribund: the 117th easiest schedule out of the 120 Football Bowl Subdivision teams.

“There are at least 25 other teams that would have a better than 40 percent chance of going undefeated against Houston’s schedule to date,” Fremueau wrote. He adds that if Houston played in the Big 12 or SEC, they’d likely have at least two losses.

But all this rhetoric is premature. If Iowa State can beat Oklahoma State and Baylor can take out the University of Oklahoma, the University of Tulsa could still be a roadblock for the Cougars (that game is Friday afternoon, with the winner advancing to the Conference USA championship game). And a few more of those other teams ahead of Houston could still lose. Again. 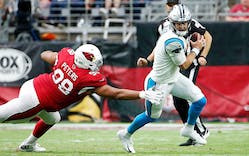