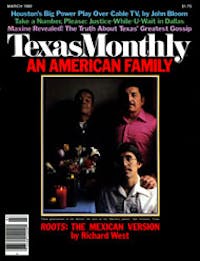 When the cable TV salesman comes calling, you should fully expect your city council to sell you down the river. Not that they mean to do it. It’s simply that history shows most city councils don’t know the first thing about cable. People who can barely figure out the briefs for a utility-company rate increase can’t be expected to master the baffling language of a rapidly changing technology. So most cities follow the course of least resistance: hold a hearing, ask the staff to write hasty evaluations, and hand out licenses to whoever sounds best. These are called quickie franchises, and the cable companies love them. You won’t, unless you look forward to fifteen more years of Laverne and Shirley reruns and Rice basketball games. And you don’t have to, if you’ll just remember the ten principles outlined below. Even a city council of high school dropouts could understand it this way.

Rule 1: Cable companies need you more than you need them. Cable TV is a buyer’s market. You will be told that cable is a high-risk venture. Baloney. The economy is uncertain, venture capital is scarce, and yet cable companies are willing to spend billions each year on operations that take up to eight years to show a profit. Why? Because investment bankers believe that once the franchise is operating, it will generate cash like a telephone company did before the federal government reined it in and turned it into a “benevolent monopoly.” In practical terms, this means that whatever a city council demands, it’s likely to get. A case in point is San Antonio, which was running short on funds for street and sewer repair. Solution: the council asked UA-Columbia to advance the city $1 million against future franchise fees. UA-Columbia did—and got the franchise. Cable companies, in short, will do anything for a franchise (a former executive at Teleprompter is serving a prison term to prove it), but once the franchise is granted, your options are gone.

Rule 2: Forget about sports and movie. First-run movies and live sports networks will be available to everyone in America who wants them, for a very simple reason: they are the only cable services that consistently make money. The cable company that does not offer sports and movies has yet to be created. The question should really be phrased like this: if we give you a license to make money on sports and movies, what goodies are you going to give us in return for those profits?

Rule 3: Ask for twice as many local channels as the cable company offers. Most companies will propose a package of, say, two educational channels, one government channel, and one public-access channel. Thanks to a lawsuit brought by Midwest Video, co-owner of the Austin franchise, a cable company doesn’t have to offer any local-origination programming if it isn’t required to do so by local authorities. Some companies even pour everything—government, education, public access—into one channel that stays dark most of the time from lack of promotion. The reason here is simple, too: local programming has always been a drain on profits. But it doesn’t have to be if you follow…

Rule 4: Insist on a fully equipped studio with a professional staff whose business is to take the boredom out of local programming. This one, above all others, will be greeted with the loudest protestations. Studios are expensive, especially the kind you are going to ask for, and so are qualified staffs. Portable cameras and mobile broadcasting units, which you should also insist on, will be a further drain on the company’s expected profits. And the protesting executives will have a potent statistic on their side: people don’t watch local access.

True. People don’t watch local access because it is usually badly produced, poorly edited, and promoted not at all. Our director of access will change all that. This person will be a P.T. Barnum of cable TV. If he is successful, he will have every civic organization, municipal department, arts group, aspiring entertainer, and outspoken curmudgeon in town clamoring for time on the access channels. He will give them expert technical advice. He will take his cameras into their homes and haciendas and hot tubs. He will adorn their programs with attractive graphics and special effects. His job, in short, will be to make people look good.

Rule 5: Encourage X-rated movies. In most Texas towns this will not be politically feasible, but the arguments are worth making anyway. First, they make money—and the more the cable operator makes, the more the city makes and the more the public can demand. Second, they are an optional service available only to those who pay for them. A man stood up at a cable hearing in Dallas last fall to say he didn’t want a sewer running through his living room. Yet it is possible to route the sewer past your house, and it is also possible to purchase channel-selector locks that will keep your children from playing the sewer. Most X-rated movies do smell. All the more reason to bring them into the mainstream, where a mass audience might start demanding a better class of porn. You will be doing this for art.

Rule 6: Exact a high franchise fee. Everyone knows that cities have eroding tax bases. The franchise fee is the most painless tax to come along since the one on pinball machines. For many years the Federal Communications Commission set the city’s share at 3 per cent of the cable company’s gross revenues, but the FCC got out of cable regulation last year. Houston asked for 3 per cent anyway. San Antonio got 4. Most large cities in the future will ask for 5, and you should too. In a city of, say, 100,000 subscribers, that could mean more than $1 million per year.

Rule 7: Demand a two-way system. All this means is that the cable is capable of carrying messages from your set to some other terminal, as well as vice versa. It can be hooked up to home security systems (which automatically notify authorities in case of fire or burglary), and it can be used for narrowcasting (programs that go to, say, the heart surgeons in Houston and no one else). In the future, it may be used for reading utility meters (saving the city additional millions), for instant viewer polling (like Warner’s QUBE system, which will serve Northwest Houston), or for access to specialized computer services.

Rule 8: Find out what’s available in the finest cable system today, and then ask for more. Science-fiction writers might be of some help on this. As early as the thirties they predicted the general outlines of today’s satellite-to-cable transmission systems, and some have even been hired as consultants to the larger companies in order to help plan the future. The cable is a very flexible device in a nation that is being wired electronically for almost every kind of information-gathering function. But the technology changes too rapidly to know what you’re missing tomorrow by awarding a franchise today. So include a clause in the franchise that allows for periodic review of the changing uses of cable and provides a way to update the existing system. For example, the best state-of-the-art system today has a two-way capacity of 52 channels, but most executives expect that number to rise quickly to 80 and eventually to 120. Last October Grand Prairie granted a franchise for a state-of-the-art system (35 channels at that time). A month later, nearby Farmer’s Branch awarded a franchise for 35 channels with the provision that Warner agree to lay two adjoining cables with an eventual capacity of 80. Ten years from now, there may be twice as much programming in Farmer’s Branch as in Grand Prairie.

Rule 9: Treat the cable company like any other utility. Any cable company will resist the idea that it is a utility. Assertions of its entrepreneurial risk notwithstanding, it is a utility and should be strictly regulated. That means setting rates, insuring 24-hour response to service problems, keeping close tabs on how the company spends its money, and reserving the option to purchase the entire system if the franchise is not followed to the letter. No city needs another telephone company.

Rule 10: Take your time. A city that rushes into a franchise will end up with a lousy deal. The longer you delay, the more hearings you hold, the more questions you ask, the better the offers will become. Your instincts will tell you to get this messy, complex process finished as soon as possible. Your instincts are wrong. The best ploy of all, if you have the time, is to bring all the cable applicants into a hearing on the same day, line them up in front of the council, and painstakingly compare each system to every other system. “Mr. A,” you will say, “you have a very appealing channel capacity, but it appears that Mr. B is offering more local access, and Mr. C can build his system sooner. Do you think you could bring your proposal up to their level?” Mr. A will readily assent. Repeat the process for Mr. B, Mr. C, and all the rest until you have the best possible setup. It works. Two or three cities in Texas have already tried these tactics, and they will be forever hated by the cable salesmen who had to go through it. When they call you a son of a bitch, you know you’ve got the deal you wanted.