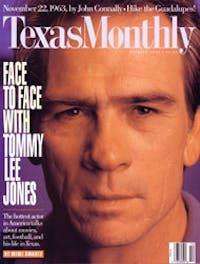 I heard what I thought was a rifle shot. I turned my head in the direction of the sound, which seemed to come from behind my right shoulder. My eyes saw nothing unusual, but I felt an icy chill of anxiety. I turned to the left, toward President and Mrs. Kennedy.

In the middle of my turn, I felt a thud, as if someone had pounded me on the back with a fist, a blow so hard I doubled over. My eyes were still open. I could see blood drenching my shirt and I knew I had been hit.

The car jerked into another speed. My wife, Nellie, pulled me to her lap and said without panic, “Be still.” I blurted out the words “My God! They are going to kill us all!” In the microsecond it took for that cry to leap from my lips, two things happened: Nellie’s action saved my life, and the conspiracy theorists had the first peg on which to hang their endless webs of intrigue. John Connally, the governor of Texas, had referred to the collective They, the mysterious They, the ever-present and all-powerful They.

It would be a conceit to think, much less claim, that a spontaneous outburst from a wounded man touched off the cycle of conspiracy plots that have spread like crabgrass and whose numbers continue to grow with each passing November. If my phrasing encouraged anyone, and apparently it did, I resent and deplore being used in any way to turn the tragedy into a cottage industry.

I suppose the conspiracy rumors began that day, the first of the books within months, or weeks. We have had the two Oswalds, the two guns, the two John Kennedys, conspiracies sponsored by the Soviets, by Fidel Castro, by the Mafia, the FBI, the CIA, and the oil cartel. Anyone with a theory could find an audience or a forum. The wackier the theory, the stronger the response. At least one book—probably more—argued that Lee Harvey Oswald was a Russian spy. I believe you could make a better case that his wife, Marina, was the lost Princess Anastasia.

Of course, none of this was on my mind as our motorcade, traveling on Main Street, approached Dealey Plaza. On the northwest corner was the Texas School Book Depository, an ugly brick building—once a dull red but now sandblasted to a shade of rust. In 1901 it had been erected as the offices of the Southern Rock Island Plow Company. It looked like a factory.

I had driven past that spot many times. It was just another roadway whose only purpose was to move you along to a prettier section of town. That day it would join Ford’s Theatre in the history of the nation. The fact that it did will be a source of pain to me all of my life, both for the tragic act that happened there and for the shadow it cast on Texas so unfairly.

The day was brilliant and sunny and crisp, and the president had made the decision not to use the bulletproof top that came with the car. We were all smiling and waving to the crowds. I was, frankly, relieved, pleased with how lovely the day had turned out and by the size and enthusiasm of the crowds that lined the curbs.

Then I heard the first shot, and felt the second, both the sound and the impact like a loud smack. In such a moment of helplessness, of total alarm and confusion, your mind races. You have perhaps a fragment of rational thought left before the pain or the fear or both take over. And I knew, with a terrible certainty, that all of us were players in a major tragedy.

A third shot was fired and the president’s brain tissue and blood were splattered over the blue velour of the limousine, over Nellie’s clothes and my own. By then my head was resting in my wife’s lap and she was whispering to me, “Be still. You’re going to be all right.” From a distance, as if in an echo chamber, I heard Jackie Kennedy cry out: “I have his brains in my hands!”

As I was losing consciousness, I heard one more voice, a Secret Service agent screaming at the driver: “Get out of line! Get us to a hospital quick!” I was vaguely aware of the motion of the car jerking into high speed, pulling way from the rest of the motorcade. I may have heard the sirens, I can’t be sure. I felt frozen, and my ears rang with the echo of the gunshots or the sirens of the police or an inward wail that said Jack Kennedy was dead—of that I was sure—and I was dying.