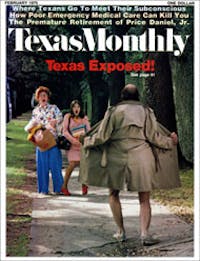 Three o’clock in the morning. You are hungry. In fact, you are ravenous. Peanut butter and jelly won’t do; you want a real meal. Cooking is out. You think briefly about the all-night restaurants on the highway, but then you remember that there is a reason the food al­ways tastes the same, no matter where you are. Why shouldn’t it? After all, it was all prepared at some food-­processing plant in Brooklyn before being frozen and shipped halfway across the country—its ultimate destination a microwave oven. No, the highway chains won’t do. Besides, who wants to be with transient strangers in the middle of the night?

There are still a few restaurants in Texas—but only a few—that have what you want. The locally owned late-night eatery is disappearing, killed off by television and the econ­omies of the highway chains. But if you look long enough, you can still find the right place with fresh food and familiar people. Here are the best in Texas, shown at 3 a.m.

In its glory days, Hills guarded the southern entrance to Austin on the old San Antonio highway. The high­way is gone and so is the transient trade, but Hills re­mains the most popular all-night restaurant in the state. One reason: it serves the best steak you can get in Texas after midnight. If you’d prefer something a little more exotic, there’s always the Riverside Coffee Shop, specializing in, believe it or not, authentic Syrian food, 24 hours a day. Hills Cafe/4700 S. Congress/442-1471; Riverside Coffee Shop, 2021A E. Riverside/441-2522.

One of the oldest restaurants in Corpus Christi is also the favorite late-night spot. The Blue Bonnet Res­taurant has the classic all-night menu—everything from omelets to calf liver, including Mexican food. The cafe also serves real butter. The Blue Bonnet is closed only from 5 p.m. Tuesday to 6 a.m. Wednesday. Another haven for night people is the Hasty Tasty Restaurant, where the menu is varied with an emphasis on seafood. Blue Bonnet Restau­rant/525 S. Staples/882-6972; Hasty Tasty Restaurant/2224 Leopard/883-5881.

The Brasserie at the Fairmont Hotel in Dallas is by far the most elegant all-night restaurant in Texas. The hot chocolate is world class, and you can also choose among eggs Benedict, real French onion soup, a sir­loin steak sandwich, and a wide collection of pastries and other sweets. The atmosphere is as far removed from truck stop modern as you can get, for the decor is a mixture of garden gazebo and 1890s ice cream parlor. Like the menu, it’s nice but a little heavy with sweets. The Brasserie/Ross and Akard/748-5454.

El Paso has one of the great all-night restaurants anywhere. The Hollywood Cafe may not look like much, but it has been an El Paso tradition for 65 years and shows no signs of slowing down. The three-story building it shares with a hotel was the tallest structure in El Paso before 1900. The most popular offerings are cabrito and menudo, but the menu includes 52 complete dishes, among which are beef tongue, roast lamb, and T-bone steak. Nothing costs more than $2 except the T-bone. That’s $2.50. Hollywood Café / 301 S. El Paso / 352-0275.

Fort Worth is not a city for night people. The best all- night restaurant closes at 4 a.m. and isn’t open at all on Mondays and Tuesdays. Nevertheless, when it is open, Sammy’s is one of the premier late-night spots in Texas. The location is superlative—a converted house— and the choice items on the menu are Mexican food and steaks. Sammy will greet you at the door in his tuxedo and his family will wait on your table. Sammy’s Restaurant/300 W. Central/624-0764.