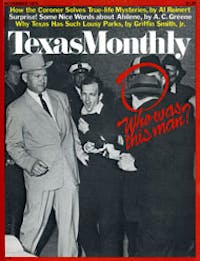 Over the years, interior designers have told me about their sex lives; their wardrobes; the kind of food, films, and people they like or dislike; the kinds of parties they give; and occasionally even the names of their psychiatrists. I have heard about, seen, and touched their pet furnishings, art, and rugs. I have delved into every facet of their lives except one: their favorite project. Each has claimed there is no such thing.

These five designers did not break with tradition. There are officially no favorite projects in their design-oriented lives. There are, however, projects which mirror their philosophies better than others, which show best what they can do with what was once raw space. And raw space is, after all, what we all start out with.

Sally Walsh and Carol and Del Hermanovski deal in “contract” (of­fice) spaces, a type of decorating which is a world away from residential work. Architect Si Morris of S. I. Morris As­sociates in Houston calls Sally Walsh the “toughest son of a bitch in the partnership,” and Walsh, the firm’s partner in charge of design, loves it. The de­signer grew up in South Dakota in a family atmosphere “awash with art and architecture.” In a first-year college course she was once required to identify 500 famous paintings from color slides. “I didn’t miss any of them and they didn’t know what the hell to do with me. I left. I was a dropout from nothing but boredom.” She went to Chicago and in a few months was hired by Hans Knoll “over dozens of people with ar­chitecture degrees because,” she laughs, “he said I had a perfectly blank mind.”

Walsh came to Houston, helped start a decorating business, went to work for a well-known contract furniture and stationery store, and ended up where she wanted to be all along.

Walsh leans over her neat, travertine desk and says, mincing no words, “Design is a broad-ranging field. I know only contemporary.” And that is how she designed the ten floors, each 20,000 square feet, of the Transcontinental Gas Pipe Line offices in Houston’s Transco Towers. The problem was making a pleasant environment for more than 700 workers. “You have to create a space which belongs to each person. That takes a lot of thought and imagina­tion.”

Specifications and detailings are pre­cise: specially developed carpeting with a twenty-year life; open-space work stations situated at 45-degree angles from exterior walls for privacy; five-foot-high lateral files made with both drawers and doors; self-contained stations with lighting, retractable phone cords, and duplex plugs; one-inch-thick fiberglass panels covered with camel hair for sound absorption. Furnishings throughout are simple, colorful at times, and unobtrusive. Walsh says, “There is no reason to be aware of the furnish­ings. An office is not a furniture em­porium. People and paper add color, life, interest, and confusion—and those things must be allowed for within a basic design concept.”

Norman Foster has long held decorating principles whose time has recently come. The Corpus Christi decorator (“I do not want to be called an interior designer, I am a decorator”) has for 30 years believed that every­thing—from fibers to furnishings to color—should be natural.

The slight, artistic man dismisses the national and international exposure his clients’ homes have received in publica­tions ranging from Vogue to House Beautiful. “I try only to help people have a different life. But I have never considered a room successful if it looked decorated.”

Foster considers nature the best teach­er for decorating homes. “Color is ter­ribly important in putting an environ­ment together. There are no new colors in the world. I loathe those magazine programs that try to get you to buy this year’s newest color. It’s a gimmick. The best way to understand and achieve color is to study flowers, soil, trees, and rocks—it’s all there.”

He also loathes wall-to-wall carpeting, “display window” rooms, nonfunctional antiques, and anything synthetic. “People are looking for decorators who understand the human being and his relationship to his environment.” Foster practices what he preaches. A home in the Memorial area of Houston illustrates his point. The natural Saltillo tile floors were partially covered by narrow lengths of antique Oushak rugs in the hallways. The library is dominated by a twelve-by-eighteen Persian Serapi rug in tones of blue, terra-cotta, and brown. The library table came from a monastery, the cabinet is sixteenth-century Dutch, the chairs English Windsor and French, the sofas leather. The wall paint is a sand color, not white. “White would have killed the effect. It would not have been comfortable with the blues, the terra-cottas, the light and shadow. I was an innovator in combin­ing contemporary with early furniture. This idea of packaging a room out of catalogs and showrooms is the most dis­gusting thing about this basically phony profession. If there is any word to use as a criterion in decorating it would be simplicity. What you don’t do to a room is more important than what you do. Formulated decorating is dead, dead, dead.”

Del and Carol Hermanovski, educated at Parsons School of Design, migrated to Dallas eleven years ago and plunged into creating supergraphics, photo murals, neon, and plastics. Their philosophy is “if you are a good designer, you should be able to do anything.” In keeping with that maxim, the husband-and-wife team has renovated old buildings, painted a graphic on the exterior of an office building, and designed the interiors of several branch libraries, the Dallas Cowboys football club office, El Centro College, and some homes, townhouses, and apartments. They have received national attention for their “strictly contemporary” work.

They use the One North Park lobby in Dallas as their example. “The materials we used are not earthy and warm. They are pristine and hard-edged like the building itself. By making the space very clean and using few materials, we felt we made it look and feel larger. The specified material for floors and walls was travertine,” said Carol Hermanovski, “but we felt a pewter-gray granite was more appropriate and we used it on the exterior steps as well as on the interior lobby walls and floors. We used mirrored Plexiglas for the very low ceiling [8′ 6″] to give an illusion of height. The public corridors had to contrast with the lobby area, so we used soft materials on the tunnels leading off the lobby: carpeting, and Velvetex sprayed on the walls electrostatically. We like the texture of the matte finish and marks don’t show.

“When two materials come together it is important to make a neat transition. We chose to divide the carpet from the granite and the Velvetex from the steel with a ribbed black vinyl strip that goes across the floors and up the walls. And the illuminated indicators covered by perforated stainless steel next to the vermilion elevator doors are one of those 4 a.m. ideas that worked.”

The Hermanovskis run the gamut of materials in executing their design ideas. “We are coming in contact with natural materials and nature and we see that as an important design force. Plastics are emerging as organic pieces—plastics that look like plastic, not like wood—and will be used more. Real lacquered walls are good now, if you can afford them [about $5 per square foot]. Window treatments should be practical; views shouldn’t be blocked. Space should be clean and simple backgrounds for bodies and art.”

Tonny Foy is the Fort Worth designer who offices in a 92-year-old house and lives in a recently remodeled home. He cheerfully admits not only to upholstering a client’s Louis XV sofa in blue denim, but also to designing the Fort Worth Art Museum solarium, the chancellor’s office at Texas Christian University, a Victorian complex on a ranch, and a car dealership in the style of an art museum.

He is a relaxed man who likes “open clients—people who are willing to learn.” He kicks his oxblood Weejuns onto his gray commercial-grade living room carpeting, settles back into his stark white armless sofa and says, “I don’t like anything that is pretentious, not people, not houses.

“I hate oh-my-god rooms—oh-my-god good or bad. Details should be noticed gradually. They shouldn’t jump out at you. Anything that is trendy (such as Art Deco) should be done in small doses, like chair seats or rugs. The most important things in a room are people, art, and plants. Furniture should just be there. Patterned wallpaper, patterned Mylar, patterned walls are against what I believe in. So are tricky lighting gimmicks. Real style is not giving a damn about what is in or out. It is following your own lifestyle.”

Foy’s own home reflects his feeling that “there is so much confusion in our everyday lives, the home should be serene.” In a year’s time, the Foys and architect Emery Young moved the bathrooms, the kitchen, changed all the windows, raised the ceiling heights, took off an overhang, moved the air conditioning underground, and added 1200 square feet of space. “With all the glass in the house, the outside trees became a part of the rooms. There was a lot of busyness going on, so the rooms themselves had to be completely quiet.” The walls are white, “but light, shadow, and texture warm them.” There is very little color and little furniture: a piano, a dining table, chairs, benches, sofas in the living room. Each room has several functions and is as comfortable for children as for adults.

Furnishings were mostly reshuffled instead of bought new; some are ten years old. Most of the pieces are pedigreed (Mies van der Rohe, Le Corbusier, Ward Bennett), but some were bought at import shops. Colors were kept to a minimum and textures are important. “In the living room we mixed black, gray, and brown as well as wicker, steel, and canvas. The paintings are no-color. You can follow only your feelings in a house like this.”