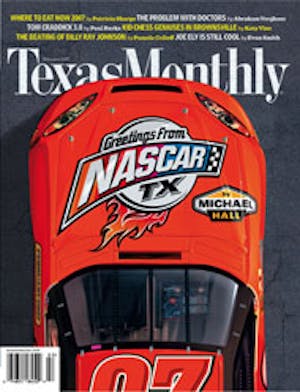 AND IN TEXAS, QUITE LITERALLY: Not only is the Fort Worth Stock Show and Rodeo already in progress, but the San Antonio show will also take place starting February 1. Then you have the Houston Livestock Show and Rodeo, the largest livestock exhibition in the world, which kicks off February 27.

Now, if you’ve ever attended one of these shows, it’s probably been a weekend of kiddie rides, maybe a rodeo, concerts, a dirty pair of boots from wandering the animal pens, and no doubt a corn dog or two—there’s no greater Texas tradition. But for a rancher, a livestock show is an entirely different experience. It means business: a place to meet other ranchers and agriculturists, to advertise and compare your product, and to catch up on industry trends. In Texas the practice goes way back; the first Fort Worth Stock Show and Rodeo, for example, took place in 1896. You can imagine how important a show like this must have been before e-mail, digital photography, or magazine coverage; meeting up with other ranchers to find out the latest industry happenings would have been crucial. But even in the Information Age, this contact is essential. You compare notes on new techniques, find out what genetics are available to further your breeding programs, and compete for top honors in the industry.

Competition is at the heart of a livestock show. Like any trade, the cattle business is driven by it, and a show lets you measure up against others in your field. In our case, our product is the purebred genetics of our Charolais bulls, whose heavy-muscled makeup can be bred into other herds. At a show our cattle get assessed against others by an official judge, who wields tremendous power indeed: He determines which animal best exemplifies a breed’s characteristics and exhibits the traits that will move the breed forward. Winning is a great honor as well as an incredible marketing tool—if your animal wins, the demand for its genetics automatically increases. (If it’s a cow, there will be a demand for her frozen embryos; if it’s a bull, his semen sales will increase.) Last year, for example, our bull Wind Power was named 2006 Grand Champion Charolais Bull in Houston. Not only that, but a bull purchased from our ranch also sired the champion steer. As soon as we heard these results, we began advertising the news.

A judge’s decision sets an industry standard and has a direct impact on business, so you can see why cattle people take livestock shows so seriously. Of course, with such high stakes, being a judge is no small task itself. You must be on an approved list of judges, voted on by the individual breed associations—and not mess up. Your decision is almost always polarizing. Winners think you’re the wisest person on earth, and losers wonder if you even know the difference between a cow and a bull. My brother, Mitch, does a lot of this judging. He was on the Texas A&M Livestock Judging Team when he was in school (yes, there is such a team—just no cheerleaders), and he has been judging major shows ever since. I spent some time on the A&M team too but didn’t take to it like Mitch did. Knowing what I do about cattle and watching Mitch and the others in action, I consider a judge’s decision to be a useful guideline. Still, it’s amazing what one person’s opinion can do for an animal’s value.

As for show specifics, each cattle breed has its own competition. And for each breed, there is an open division and a junior division. The open division is the one in which ranchers and breeders compete; as the name suggests, it’s open to anyone. The junior division is for school-age children, ages eight to eighteen, who compete against each other for prizes such as scholarships. (This is where you’ll find 4-H and Future Farmers of America exhibitors.) Within the junior division, there can also be classes: market and breeding. If cattle are going to be entering a breeding program, like heifers do, for example, they compete in the breeding class. Whereas animals that are not necessarily going home with the person they came with—that is, they’re being sold as an end product—fall into the market class.

Growing up, Mitch and I competed both on the junior level and in the open shows. We showed Brahmans as well as Charolais; in fact, I was president of the Texas Junior Brahman Association, as well as secretary of the national one. (And queen! Yes, there’s a queen.) In our first competition, Mitch and I faced each other. It would become a fierce rivalry. Not only did we compete against each other in classes—I didn’t care if I came in next to last, so long as Mitch was last—but we also fought when it came time to decide who was going to show which animal. (Even though the cattle were all the ranch’s, we each wanted to show the one we thought would win.) One time when Mitch and I were teens, we had a bull we were both sure was going to be the champion in Houston, and we got into a fight in the show barn about who was going to show him. We started hitting each other with show sticks—you use those to guide your animals—right there in front of everyone! To this day, even now that I’m a mother, an attorney, and trying to be a respected rancher, I run into people who remember the time that Mitch and I went at it in Houston with the show sticks.

If you’ve ever been on the halter of a champion, you understand. A livestock show is much more than Ferris wheels and funnel cake. You throw all your energy and reputation into representing the ranch, and you spend time and money on planning, finding the proper equipment, and ensuring that your cattle are in condition to compete (gentle and fat, in other words). But every second is worth it. We get publicity and prestige—there’s perhaps nothing more valuable than a livestock show to a ranch’s business—and we get to catch up with those who are working as hard as we are. And now that our kids are getting older (Mitch’s daughter Morgan turned eight last year, and my son, Royse, is almost old enough to show too), we’ll be back on the junior show circuit. Mitch and his wife, Linda, and my husband, David, and I have even gone in together to purchase a show-cattle trailer for the kids to start using. Of course, if a brawl breaks out over who gets to show the big bull of the year, I’ll certainly understand. I may even be in the middle of it.

Tonnyre Thomas Joe lives on the Thomas Ranch, in Kenedy and Willacy counties. She has been chronicling her life as a rancher for Texas Monthly since August 2006. Read her previous installments.