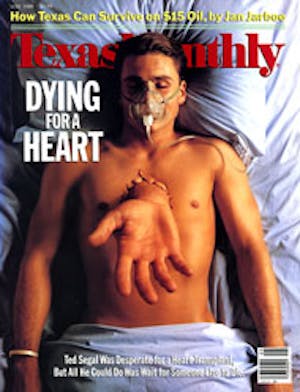 This is not another story about terrible conditions in the colonias outside El Paso, where 23,000 people scrabble along with no drinking water and 44,000 get by with no sewer system. You’ve read those stories, and God knows the unhealthy, exacting universe they describe is real enough. But something that only a year ago would have been inconceivable has happened in El Paso: Various local entities actually rose above their timeworn animosities and ritual buck-passing to fashion a workable approach to these monumental problems—problems that in the past have seemed all but insoluble. The path to this solution would curdle the blood of a junior high civics class, but so what? However much the richly varied cast of characters dislike each other—and they do—they have lured influential state and federal officials on board. They have cut a classic political deal in which everybody gets something and everybody gives up something. As a result, poor people like Mary Lou Perrez, a fiercely determined single mother of three who has endured eight years without potable running water, for the first time have a reasonable hope that the future may be easier. Sitting in her painstakingly tidy trailer in a San Ysidro colonia, Perrez says, “I think we’ll have water soon. Because it’s not just people from the colonias who are working on it anymore. Now all those—how do they say it?—big shots are involved.”

Until recently, precious few big shots were. Laissez-faire was the order of the day among local officialdom. The city’s attitude was “It’s a county problem”; in 1979 the city’s Public Service Board (PSB), which oversees utilities, ruled against any more water outside the city limits. The county, pleading lack of money and expertise and authority, argued that the city should take care of it. Impasse. Meanwhile the problem mushroomed horrendously. Poor people warmed into the Lower Valley colonias in search of affordable land. Enticed by developers’ promises, they snapped up overpriced subdivision plots with no water or sewer connections and embarked on a grueling form of suburban homesteading.

Enter the El Paso Interreligious Sponsoring Organization (EPISO). A sister organization to San Antonio’s COPS, Valley Interfaith, and Houston’s TMO, EPISO since the early eighties has played the role of principal goad in El Paso’s colonia water drama. EPISO’s community organizers went after press coverage that ultimately yielded a flood of national attention during 1987. They secured an early commitment from Lieutenant Governor Bill Hobby to help spring low-interest state water-plan funds for a solution. They labored over the legislative birth of the Lower Valley Water District, the existence of which was crucial in getting crusty El Paso mayor Jonathan Rogers to reverse his adamant don’t-look-at-us posture and sit down at the bargaining table. They held countless meetings with grass-roots activists, including Mary Lou Perrez. Above all, they wouldn’t shut up. “The main thing was to make politicians realize there was a problem that would get worse and worse,” says EPISO executive-committee member Margarita Martinez.

On the other side o the political spectrum sat Mayor Rogers, one of the few remaining strong big-city majors in Texas and the man who, as both member and appointer of the powerful PSB, had his hands on the controls. In July of last year, with local media coverage and political pressure escalating, Rogers proposed a brilliantly simple swap that made things fall into place. For complex reasons, El Paso couldn’t acquire water rights outside its city limits. The water district could. Why not assign the district’s rights to the city’s PSB during seasons of peak demand, then in exchange have the city treat the Lower Valley’s irrigation water to make it drinkable. Rogers called together three officials from the city and the water district, banned lawyers from the room, then proceeded to hash out a bargain in two and a half hours. Bingo: Now nobody could say the colonias were getting a free lunch. “It was simply the businessman’s approach,” boasts Rogers.

Major snags soon developed. The water district’s plan to finance the needed pipelines and treatment plant with $22 million in revenue bonds included stratospheric consultant fees and higher-than-expected water rates for users. EPISO wound up in the painful position of working against the very water initiative it had sought for son long; voters defeated the bond issue last November.

Back to square one? Nope. By this time, embarrassing national publicity about Third World horrors in El Paso County had reached a high pitch. Rogers stepped forward with a cheaper and better alternative. The water-rights swap was still the key—this time the PSB, with its know-how and good bond rating, would step in to build and finance the new system. The water district would pay the PSB a fee to operate and maintain it. The water district surrendered some of its autonomy; the city and the PSB took a modest financial hit; the EPISO folks ended up with a projected $30-a-month rate for the colonias, higher than they’d wanted but still in the affordable range. Everyone could live with it.

There are still lots of hurdles to jump before colonia dwellers see any water. Lawyers are thrashing out the crucial raw-water-supply contract that underpins the whole deal. The federal Bureau of Reclamation must sign off on any transfer of water rights, and that’s not guaranteed. The fledgling water district, without so much as a pickup truck or an employee to its name, has yet to devise a schedule for extending service to thousands of waterless households. Even at the projected hookup rate of at least six hundred households per year, it could take seven to ten years before the district gets around to everyone who needs water. And that’s begging the larger question of how colonia residents can even afford the cost of hooking up to such a system—up to $4,000 per household—once it’s in place (El Paso congressman Ron Coleman, with backing from Speaker of the House Jim Wright, may buck for low-interest federal funds to assist the homeowners.)

All these uncertainties haven’t prevented everyone and his dog from rushing to take credit for bringing water to the Lower Valley. Some claims are more plausible than others. Ambitious and media-wise county judge Luther Jones contends the turning point came when he raised a ruckus in the press last spring and summer about potential community-wide health effects. He’s partly right. Some claims are more gracious than others. EPISO, as is its wont, its quick to claim victory on behalf of its members but carefully acknowledges Mayor Rogers’ role. Rogers, on the other hand, cleaves to his businessmen-know-best philosophy and curtly dismisses pesky old EPISO by saying, “In my opinion, they were not a factor at all.”

Father Ed Roden, an EPISO exuective-committee member who is pastor of a Socorro congregation in the heart of colonia territory, takes a jaundice view of the recent chest thumping. “Now everyone’s getting on the bandwagon,” notes Father Roden. “A lot of politicians want to be the hero, but the real heroes are the people who have put up with the politicians who ignored them and the developers who took advantage of them. They’re living the American dream a little more intensely here in the colonias. They have had to put their dreams together on their own, from scratch.”