CRIMESTOPPERS TEXTBOOK #286: REPORT ALL TATOOED KNEES TO THE PROPER AUTHORITIES
A young lady told Game Warden Glen Phelps she didn’t know the man he was trying to serve a warrant to for a fishing violation and was about to close the door when Warden Phelps spotted the man’s name tattooed on her knee.

VENI. VIDI. HEE-HEE.
While robbing a Dallas grocery store, Gary Shaw began laughing so hard that he shot himself in the leg.

HEEERE’S SAMMY!
While awaiting sentencing in the Harris County Courthouse, Samuel Sanchez began removing tiles from the floor, only to plunge through the ceiling into the courtroom of Domestic Relations Judge Wells Stewart.

SOME PEOPLE NEVER GET ENOUGH JUNK FOOD
Two Lamesa patrolmen were caught taking food from the local high school cafeteria by school officials lying in wait in the schoolyard.

NOBODY’S PERFECT
When Charles Washington applied to become a Houston policeman, he answered, no, he had not been in trouble with the police, but, yes, he had robbed a store once but wasn’t caught. During the interview the police matched his prints with those in an unsolved robbery, and arrested him.

HE’S MAKING A LIST, CHECKING IT TWICE, GONNA FIND OUT WHO’S NAUGHTY AND NICE
A number of Dallas prostitutes propositioned Santa Claus in the Oak Lawn “meat market” area, only to discover that the bearded man in the red fur-trimmed suit was from the vice squad, not the North Pole. Jolly Old Saint Nick bagged nine hookers in ninety minutes, a new record for prostitution arrests.

HAND’S UP! WANNA SEE MARTHA AND THE KIDS?
After robbing a Montgomery Ward store, Houstonian J.B. Hall fled to what he thought was an abandoned Job Corps center, only to find that it had recently been converted into a prison.

FORTUNATELY, OFFICER, THEY MISSED MY COCAINE
A Texas A&M student told the police that burglars broke into his residence and stole a marijuana plant.

SHE WOULD HAVE ESCAPED, BUT THE NEXT BUS WAS LATE
A Houston woman robbed a series of film-processing stores on Bellaire Boulevard by taking the bus from one to the next until police got ahead of her and lay in wait at the next store down the line.

CRIMESTOPPER’S TEXTBOOK #290: CHECK OUT ARSON SUSPECTS WHO ARE LOYAL, HELPFUL, COURTEOUS, KIND, OBEDIENT, THRIFTY, BRAVE, CLEAN, AND REVERENT
A fire that caused $1 million in damages to national Boy Scout headquarters in Irving led to the arrest of a former Explorer serving as a security guard who had hoped to become a hero by putting it out.

BUT HONEY, A GIRL CAN’T BE TOO CAREFUL
An Austin man refused to post bail for his wife, who had been booked for shoplifting birth control pills, because he had previously undergone a vasectomy.

THE SMART CUSTOMERS USED FEDERAL EXPRESS
Patrons of Corpus Christi’s Gulfway National Bank put $25,000 in a U.S. mailbox after thieves placed a sign over the night depository reading, “Out of order. Please use mailbox.”

MOM TAUGHT ME NEVER TO CUT IN LINE
When bank robber Richard Richardson asked a teller at the First National Bank of Temple to fill a moneybag, she told him to try another cashier because she didn’t have any money. Five minutes later police officers responding to her call arrested him—still standing in another line.

BUT ESCAPE ATTEMPTS ARE DOWN TO ZERO
Sheriff Raul Arevalo complained to Willacy County commissioners that loose steel plates in the jail allowed prisoners to climb into ventilating shafts, raid the room where confiscated marijuana is stored, and return to their cells to smoke it.

I LOOK SO MUCH BETTER IN STRIPES
After a Houston community newspaper printed the names and photographs of two men who were suspected of robbing a pawnshop, Ronald Stanley was arrested and charged with burglary when he stood in front of a grocery store where the flier was posted and said to passersby, “That’s me.”

YOUR MONEY OR MY LIFE
A Houston man robbing a convenience store stabbed himself when he leaned over to take the money from the register. An investigating officer said, “He forgot to turn the knife downward.”

NO TIME TO BE SOFT ON CRIME
Edward Williams, the materials manager at Jefferson Davis Hospital in Houston, was accused of stealing 79,680 rolls of toilet paper.

KEEP PESTERING US AND WE’LL HAVE YOU PAROLED
Sentenced to two years in prison for aggravated assault, Wayne Pratt tried to turn himself in to TDC officials in Huntsville but was told he didn’t have an appointment. He tried again five weeks later but was told he had arrived too late.

A NIGHT IN THE LIFE OF OUR HERO
A seventeen-year-old boy identified himself as a Williamson County sheriff’s deputy, entered a motel lobby, and told the clerk he was part of a team working on prostitution. The teenager demanded a free room and called an escort service from the motel lobby.

When the escort arrived at the teenager’s room, the youth told her she was under arrest for prostitution—but he would let her go if she would have sex with him. He handcuffed the escort in the bathroom. Then the desk clerk showed up to insist on payment. The teenager argued unsuccessfully and left with his escort.

After taking the escort to two more motels but failing to get a free room, the teenager went to a fourth motel and paid for a room, where he and the escort had sex.

The escort and her boyfriend were released after the police heard their story. The teenager went to the police to claim his property. He was promptly arrested.

IT GOES GREAT WITH TACOS AL PRISON
After paying a Juárez cabdriver $50 for marijuana, two El Paso men discovered that they had received only tumbleweed and oregano. When they reported the theft to the Mexican police, they were put under arrest.

YOU HAVE THE RIGHT TO REMAIN STUPID
After James Fitzgerald Johnson of Copperas Cove attempted to rob an Austin credit union, he fled to Round Rock, where he jumped out of his car and ran directly into the back yard of the Round Rock police station. 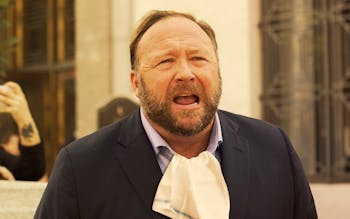