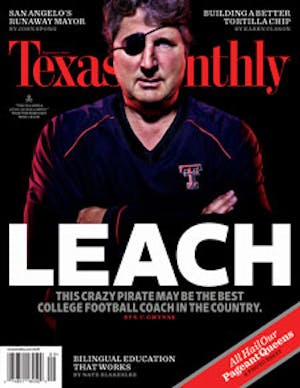 It remains one of the most glaring instances of a studio’s mistreating a filmmaker in an industry famous for such cautionary tales. On September 1, 2006, Mike Judge’s Idiocracy trickled its way into 130 theaters in seven North American cities after two years of languishing on the shelf at Twentieth Century Fox. A scattershot, overly cynical satire about a future in which all Americans are subliterate and addicted to consumer products, Idiocracy was hardly the Austin-based writer-director-producer’s finest hour. But the studio’s handling of the film (no advance screenings for critics, virtually nonexistent trailers and print ads) suggested something much worse. According to Judge, Fox was frustrated by the film’s middling test-market scores and hoped Idiocracy would find an audience through word of mouth, à la his cult classic, Office Space—a tricky prospect considering that few people even realized Judge had made a new film. The great irony, he says now, is that of the numerous projects he pitched after Office Space, Idiocracy was the one that studio execs and his agents deemed to have the most commercial potential. “The wisdom of Hollywood,” he noted wryly, when we spoke earlier this summer.

Happy news, Judge fans: The creator of Beavis and Butt-head and King of the Hill has regained his cinematic mojo. Extract, opening this month, once again finds him doing what he does best, observing with both a jaundiced eye and a generous heart the foibles of a group of middle-American oddballs. Freed from the burdensome clutter of Idiocracy’s cut-rate special effects (not to mention the sourpuss inertia of that film’s star, Luke Wilson), he taps back into the freewheeling storytelling style of the best King of the Hill episodes. Extract is a movie that seems made up as it happily bounces along. Without the interference of studio bean counters—the film was financed independently and is being released in the U.S. by Miramax—Judge conjures up an atmosphere that is modest and relaxed. The result is enough to give one hope that, in this age of comic-porno extremity, when capturing an audience’s imagination means shocking them with outré sex acts (Brüno) and obnoxious stereotypes (The Hangover), there might still be a place for this singular artist’s brand of world-weary charm.

The hero of Extract, which I screened in unfinished form in July, is Joel (the wonderful Jason Bateman), the owner of a company that produces a line of flavor extracts. Married to a graphic designer (Kristen Wiig) who no longer wants to have sex with him, surrounded at the factory by a gaggle of bickering nimrods and a second in command (J. K. Simmons) who insists on calling everyone “Dinkus,” Joel functions as a kind of spiritual cousin to the frustrated IT wonks in Office Space; imagine Ron Livingston’s Peter, ten years older, having decided to become his own boss, only to discover that authority is accompanied by a whole new set of responsibilities that he never wanted in the first place. Just as in Office Space, much of the pleasure here comes from Judge’s exquisite eye for the banal characters of modern life and his ability to mock these people without ever tipping over into meanness. Meet the nattering next-door neighbor (David Koechner), insistent that Joel and his wife attend a $55-per-plate charity benefit; the “entrepreneur, spiritualist, healer” bartender Dean (Ben Affleck, sporting a beard and eighties rocker hair), who takes Xanax for the common cold; and the busybody assembly line worker (Beth Grant) who insists that the recently hired Mexican employee stole her purse. Much like Hank on King of the Hill, Joel has learned to accept his station in life as the stoic ringleader of this circus; he goes with the flow of imbecility. There’s a gentle burst of humor, along with a surprisingly affecting hint of melancholy, when he delivers such lines as “I just have to power through it until I’m too old to get up. Then it will be all right.”

But if Extract circles back to Judge’s earlier work, it also finds the filmmaker moving in a different direction—and offering up a sly rebuke to the past decade’s worth of relentlessly foul comedies, from American Pie to Superbad. This new film is a sex farce the likes of which Preston Sturges used to make, more daffy than depraved. A terrible accident occurs at the factory, causing one of Joel’s most loyal employees, Step (Clifton Collins Jr.), to lose a testicle. A gold-digging ex-con named Cindy (Mila Kunis) takes a job there and begins flirting with Joel while secretly encouraging Step to sue the company for millions. Desperate to have an affair with Cindy, Joel agrees to a plot devised by Dean to hire a dim-witted male prostitute (scene-stealer Dustin Milligan) to seduce Joel’s wife, figuring that it’s acceptable to cheat if you’ve been cheated on first. But whereas most American comedies exist solely to find increasingly bizarre ways to humiliate their characters (see anything starring Ben Stiller), Extract takes a more openhearted route. Even the ambulance-chasing lawyer, played by Kiss’s Gene Simmons, who suggests settling a legal dispute by slamming Joel’s private parts in a door, comes across as strangely endearing. The film, finally, is about how we’re all basically screwups and that the best we can do to get by is to link arms and screw up together.

Will Extract reverse the dismal performance of Idiocracy, which made just under $500,000 in its theatrical run? Recent evidence doesn’t exactly bode well for Judge: After chugging along on the lower end of the Nielsen ratings for years, King of the Hill was finally canceled by Fox last year (its final episodes will air during the 2009—2010 season), and a new ABC series co-created by Judge, The Goode Family, had trouble catching on during its thirteen-episode run this summer (see “You Be the Judge”). He acknowledges that his brand of comedy, which eschews broad set pieces in favor of a lo-fi, consistently quirky vibe, isn’t easy to market. Indeed, if there’s one serious gripe to be made about Extract, it’s that it never achieves a comic groundswell and loses steam in the final twenty minutes. But the director also sounds confident that sometimes nice guys find a way to finish better than last. “Office Space still does well, and this movie is more like that,” he told me. Here’s hoping he’s right.

You Be the Judge: Can The Goode Family survive?

The ratings were poor. The reviews were decidedly mixed (“All the jokes begin to sound the same,” wrote the San Francisco Chronicle). But The Goode Family, an animated series co-created by Judge, deserves the chance to find its voice. Focusing on an überliberal suburban family trying, and usually failing, to live up to impossible standards of political correctness, the show (which just completed its first season on ABC last month and seems unlikely to be renewed for a second) relies too much on obvious gags about the naiveté of the limousine left. Yet the characters—including the Judge-voiced dad, Gerald; his desperate-to-please wife, Helen (Nancy Carell); and her wildly inappropriate father, Charlie (Brian Doyle-Murray)—are very charming, and at least one episode (in which Gerald and Helen befriend a pair of butch lesbians so as not to seem homophobic) displays the outlandish eccentricity of Judge’s strongest work.