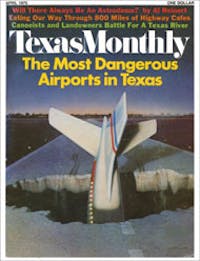 Everybody in Laredo is being excessively kind to Tony Sanchez, Sr., these days, quite a change from several years ago when Sanchez took in ten to twelve thousand a year selling office supply furniture and trading oil and gas leases on the side to help make ends meet. Kindest of all are the bankers who once regarded him as a hapless pigeon, but who nowadays fawn over him like he was Babe Ruth at the Stork Club. Today, Sanchez owns the majority of stock in one of the banks and, for good measure, the Tesoro Savings and Loan out on IH-35. He also may be sitting on top of the biggest natural gas discovery in the United States.

It is one of the profound paradoxes of the human spirit that even when something looks worthless as hell by any measure, we still think that with an extra dash of work and stardust, it’ll work. This bedeviling Mysterious Instinct that protects the feeble-minded, the prospector, and, occasionally, the wildcatter, moved Mr. Sanchez to pay five to ten dollars an acre for leases on 9500 acres of burned-out, parched country, mostly on Lasker O’Keefe Hereford’s Nopalosa Ranch southeast of Laredo. Reassuring himself that he would be missing the opportunity of a lifetime if he didn’t, Sanchez borrowed and bought, convinced that natural gas lay beneath the cactus and mesquite.

Gulf Oil had held leases in the same area for seven years. Exxon had drilled two unsuccessful wells nearby in the early Sixties, but the majors had otherwise lollygagged around and done nothing. But, while driving endless miles through the brush country, Sanchez had seen the night rig lights of a successful Pemex well across the Rio Grande in Mexico, five or six miles south of Nuevo Laredo down the Monterrey highway. That Mysterious Instinct told him gas fields respected no political boundaries and it was time to throw the dice.

No one doubts that the reserves in Texas, the largest producer and user of energy in the country, are running out. Almost two-thirds of the state’s energy needs are met through natural gas, more than twice the national average, not to mention that 95 per cent of our electricity is generated by the airy stuff. But the Mysterious Instinct doesn’t strike men as often as before. In 1973, wildcatters drilled less than half as many wells as they did in 1956.

There was a time when wildcatters regarded gas finds as not much better than dry holes. Nobody yet has devised a way to truck it to railroad cars like crude oil. Laying pipelines that would carry the stuff to customers in big cities was usually too expensive; so the best thing to do was plug a gas well and continue without looking back.

Sixteen years ago natural gas was selling for ten cents a thousand cubic feet (mcf) at the wellhead and not even Mysterious Instinct would prompt drilling at those prices. As anybody knows who enjoys warmth and eating cooked food, gas prices have changed in recent years. Gas going out-of-state is regulated by the Federal Power Commission; Texas producers cannot charge more than 51 cents mcf for that gas.

However, the wellhead price of Texas gas sold in Texas is unregulated and is currently being sold at up to $1.68 per mcf. No one doubts, least of all Tony Sanchez, that it was this higher price incentive that enabled him to try his luck, since it cost $450,000 to drill one well and $3000 a day to keep it running.

Another company, Consolidated Oil and Gas had drilled the first well in the area on rancher Norman Clark’s property near a bend in the Rio Grande. Consolidated Number One Clark successfully logged in on Labor Day 1973 and still produces gas, right along with Number Two which was drilled 2500 feet away.

Word of a possible jackpot gas play spread quickly after the Clark wells came in. In December, Sanchez and his partner, geologist Brian O’Brien, were contracted by Good Hope Refining Corporation of Springfield, Massachusetts, about a deal. Good Hope had been an unsuccessful Louisiana outfit that had been jettisoned by Houston Oil and Minerals and eventually picked up by a young wheeler named Jack Stanley.

Sanchez sold half his Nopalosa holdings in a checkerboard fashion to Good Hope, which hit four winners in a row around Sanchez’s remaining acreage. As a reward for taking the big money gamble first, Good Hope now controls nearly 350,000 acres and has invested close to $50 million in the area.

Following their success, Sanchez drilled on his leases—that not long ago people would have traded for bus tickets to Corpus—and hit gas at 7200 feet 40 days later, plugging into the pipeline on Thanksgiving Day last year. Three more Sanchez-O’Brien wells, all on Nopalosa Ranch, have been equally successful. The gas is sold to Southern Pipeline, a wholly owned subsidiary of Good Hope, who sells it to Lo-Vaca Gathering Company, the notorious subsidiary of Coastal States, who sells it to their customers in Corpus Christi, Austin, and San Antonio.

Good Hope has kept busy drilling another 25 wells, finishing a $15-million pipeline to Corpus Christi, and beginning construction on a $75-million anhydrous ammonia plant near Ingleside.

By now, Sanchez, his son (attorney Tony Sanchez, Jr.) and O’Brien needed help. What was needed was an oil company that would march shoulder-to-shoulder and hand-in-hand with Sanchez-O’Brien in buying additional acreage before other independent operators moved in. Such a partner was Watson Oil Company from Shreveport who agreed in December 1974 to furnish the money to match the Sanchez team’s geological expertise and knowledge of the area. Profits would be split 50-50. Sanchez’ land man, Pete Growth, went to work spending $1.2 million for leases on 42,000 acres north of and in the city of Laredo, around Casa Blanca Lake, and in Zapata County farther southeast from the original play. The “Watson Program” was underway.

The 4000 leased acres within the city—about 9500 lots—were a problem. Residents were puzzled and confused over contracts to use their land, so Sanchez hired 40 or so local men and women to knock on doors and explain the meaning of phrases such as “pooling clauses” and “unit agreement.” The same procedure was followed in Zapata, 50 miles southeast of Laredo.

Ironically, the established wildcatters and oil men in the area largely missed out on the huge new play which is expected to be 20 to 30 miles wide and 70 miles long. Radcliffe Killam, whose father was the Webb and Zapata County wildcatter, will benefit only by virtue of previous ownership of land in the area. Another longtime oil man, Wilbur Guenther, whose Pescadito oil play is northwest of town, so far is left out completely. Exxon has completed a $4-million well on Guenther’s acreage and Atlantic Richfield plans a $4- to $5-million operation, but preliminary tests don’t look promising.

Senator Lloyd Bentsen has mineral rights on 4000 acres in the area; ten wells have been drilled on San Antonio Contractor H. B. Zachry’s ranch. Perhaps the Mecom spread near San Ignacio—leased by Coastal States—will yield new wells. But the big winner, aside from Good Hope and Sanchez-O’Brien, is the A. M. Bruni estate, which not only owns mineral rights to 250,000 acres but one of the best producing wells in South Texas, the Good Hope J. C. Martin Number One. Laredo Mayor J. C. Martin, Jr., is trustee of the estate.

What of the future? O’Brien feels that the gas field could be the biggest in the United States, bigger than the Hugoton Field that stretches from Kansas south to the Texas Panhandle and was the world’s largest until the Groningen Field was discovered near The Netherlands.

“There have been developed already about one trillion cubic feet of gas and if several perimeter wells come through, I think we will have from five to ten trillion cubic feet of gas in this area. If the well north of the city limits hits, it makes the city look good and we will step up our efforts to drill in Laredo, but I don’t see that happening until next year,” said O’Brien.

Oil field equipment remains a problem. Companies are paying thirteen dollars a foot for pipe that five years ago cost four. The guts of a drilling rig, the mud pumps, are scarce and rigs capable of drilling at least 9000 feet that cost between $60,000 and $100,000 five years ago now cost many times that much.

Despite the flamboyant successes, failure is attracted to wildcatting like iron filings to a magnet. “Fifty percent of the wells are very marginal and barely pay themselves out,” says Mr. Sanchez, while lunching on a Big Mac amidst charts and logging reports. “The reason we are planning this gas for Texas is that the law of supply and demand regulates the price.”

“We cannot afford to take the risk to drill unless a large profit is involved because somewhere down the line you will have an accident or bad luck and you will be destroyed unless you have backup profits.”

A thoughtful silence followed as the enormity of risk and dollars involved sank in for both of us. Mr. Sanchez grabbed the phone. “Let’s check in with our mud logger Bill Blackwell to make sure everything’s safe out at the rig. I’m in no mood to call Red Adair today.”