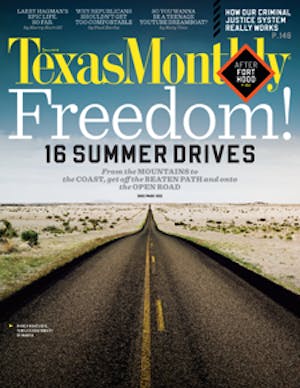 In 1979 Laura Wilson, a married mother of three,  began working with the photographer Richard Avedon. While assisting with the celebrated portraitist’s now-iconic book In the American West, Wilson would often take her young sons—actors Andrew, Owen, and Luke—on location with her. “It was a classic apprenticeship with one of the greatest photographers of the twentieth century,” she says of her time with the late lensman, who inspired her to launch her own photography career. Since then, Wilson, who has contributed to TEXAS MONTHLY, has chronicled everything from high school football players and Laredo debutantes to world-famous architects and writers. The light-flooded studio connected to her Dallas house brims with decades of family snapshots and the striking black and white portraits that have become her signature.

ABOUT THE ITEMS IN LAURA WILSON’S STUDIO

• When I worked for Richard Avedon, he gave me this Louis Vuitton case, which he had used in Paris in the forties and fifties. This is what he kept his Rolleiflex camera equipment and film in.

• This is a beautiful little example of some stitching for a pair of boots that I’m having made by John Weinkauf, the best bootmaker in the West. I have a lot of boots.

• This was taken in Rajasthan on the set of The Darjeeling Limited. Owen and four extras were waiting for a scene in a train station. It’s a colorful picture.

• Luke gave me this for Christmas. It’s a set of recordings of Hank Williams’s radio shows.

• These boxes are from a photographic archives company called Light Impressions. They are marked “N” for negatives, “C” for contacts, and “P” for prints.

• I always listen to music, but I’m not all that sophisticated. I just play what I like: Bob Dylan, Woody Guthrie, Sheryl Crow, Neil Young, Willie Nelson.

• I was shocked that my sons had made a movie because they should have been studying so they could pass Spanish and graduate from college. But when I saw the first footage, it was so unusual and so visually sophisticated. It had a charm and freshness to it.

• When I go on assignment, I take notes. I’m going to Mexico City to photograph Gabriel García Márquez, and I’ll write down my impressions of him and the things he might say or do.

• Andrew was sixteen years old in this photograph, and he had just gotten a pickup truck for his birthday. He was so happy and excited.