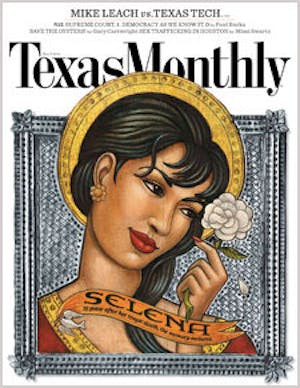 Over time, a musician’s career can take unexpected turns. Many artists peak early and stagnate, while others suddenly find their footing and make that leap from something good to something special. When this happens, the performer often seems as surprised as the audience. The past couple albums from Austin singer-songwriter Amy Cook—whose tunes have shown up on such TV shows as Dawson’s Creek, Veronica Mars, and The L Word—have emphasized her folksier leanings; 2006’s Bunkhouse Recordings, made in Marfa, was particularly spare and dusty. But she has always had a gutsier, more visceral side, and on the Alejandro Escovedo-produced Let the Light In (Roothouse Records) it comes to the fore. Escovedo, with his affinity for seventies glam rock, lays on the guitar grit, and Cook, who has a warm, textured voice, takes on the confidence of a Janis Joplin-style belter. “Mescaline” and “I Wanna Be Your Marianne” jump out of the gate with real swagger. The title track is anthemic and powerful, if a bit strained, and the blues-drenched “Moonrise,” on which Cook wails repeatedly, “When you gonna look my wayyy?” is riveting. Yet amid all the commotion, it’s a more wistful moment that steals the show. “My face was always pressed against the glass,” Cook sings on the album’s first single, “Hotel Lights,” a magnificent remembrance of yearning and revelation that features Patty Griffin on backing vocals. “You were the only one who ever asked / ‘Why don’t you come inside?’ ”