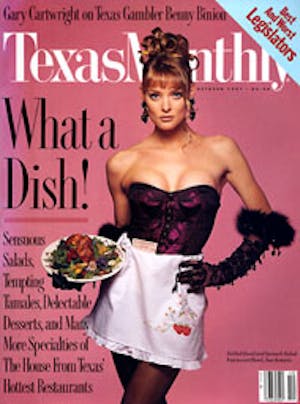 It’s enough to make you whimper in inexpressible pleasure, shriek with hot ecstasy, and sigh with forbidden desire. Romance novelist Sandra Brown, who lives in Arlington, is only the second female writer to have three books on the New York Times best-seller list at the same time (Danielle Steel was the first). Considering that most writers regard a single hit on the list as a peak experience, Brown’s achievement goes against the odds. With 54 novels to her credit (or, rather, to her credit and that of her three pseudonyms—Rachel Ryan, Erin St. Claire, and Laura Jordan), her chances were probably higher than those of your average one-book-a-year scribe.

The former weather reporter at WFAA in Dallas was fired thirteen years ago and says, “It was the best thing that ever happened to me.” Reporting heat waves and stormy weather was less than a passion. Writing about turbulent relationships gave Brown the satisfaction she had always longed for: “I had prepared for this all my life by reading everything.” Well, maybe not Melville or Dostoevsky—”The classics to me are Taylor Caldwell and Tennessee Williams,” the fragile, stylishly coiffed 43-year-old declares.

But an unemployment check was one thing she didn’t want to read. So the enterprising mother of two bought a dozen Harlequin romances and a couple of how-to books on writing and selling popular fiction and schooled herself in scandal. In 1979 Dell purchased the first manuscript, titled Love’s Encore, with a $3,000 advance just four days after submission. Since most of Brown’s novels are still in print, reprints and serialization worldwide mean that royalty checks on that first book, as well as on all the others, keep coming in. The business side of writing, which includes scheduling personal appearances on national television or discussing with editors what book cover will lure a reader, took so much of her time that she has recently hired an assistant—”It’s a good day if I can write for five or six hours.” Brown and her husband, Michael, have even produced a writer’s manual on videotape—which they market through Michael Brown Productions in Arlington—that details such basics as how to construct a plot line and how to spice up the dialogue.

From Sandra Brown’s point of view, fiction writing and success don’t make strange bedfellows—it’s as simple as learning the rules. Rule number one? “Always try to incorporate a secret that isn’t revealed until the end,” confides the author. And she continues, “Once you’ve concocted a scenario, try to make things as bad as they can be.” Finally, “There has to be a commitment at the end.” Brown’s fans don’t seem to care that this technique leads to predictability; they expect a happy ending. And it’s no secret how Brown expects her own scenario to turn out: “I want one of my books to be a TV movie, I want a feature film, and I want to be at the top of the New York Times best-seller list.”