For this month’s special issue, twelve writers and five photographers took to the back roads of Texas in search of the things to do and places to go in the little towns of our vast state. All told, they covered more than 41,000 miles in 169 days, taking in everything from Pampa to Rio Grande City and Van Horn to Orange, like army ants on a hunting expedition. While each contributor had a different focus—hotels, shops, restaurants, and so on—common themes emerged. For instance, the residents of small towns tend to be friendlier and more gung ho than their big-city counterparts. Indeed, after associate editor Michael Hall set up an interview with Premont nightclub owner Mario de la Garza for his story on the best music clubs, de la Garza promptly changed his marquee to read “Welcome Mike Hall From Texas Monthly.” Hall didn’t know about it until contributing editor John Morthland, scouting out cemeteries in South Texas, happened by it. “Doh!” said a red-faced Hall when Morthland delivered the news. “But I realized it was a nice gesture,” says Hall, “made with that total lack of self-consciousness you find in small-town Texas.” 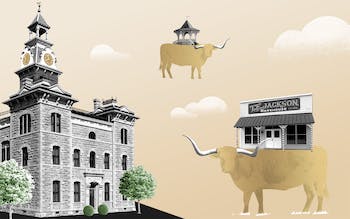