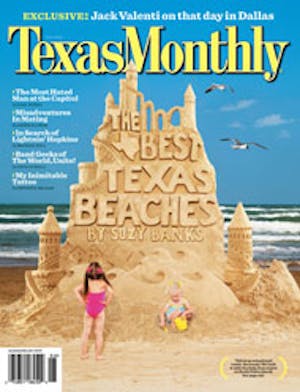 OH, BABY: That’s what Texas Monthly’s editorial and art staffs thought when we learned that three of our editors were expecting their first children within a few weeks of one another. We’re pleased to introduce our future staffers below (though we’re not through yet: senior editor Pamela Colloff is due in September).

Meet Julia Marie Rasp, though her parents called her Vincent before she was born. Her mother, photography editor Leslie Baldwin, was convinced that she was having a boy. And Dad—that would be PR consultant Gary Rasp—kept talking about Babe Ruth, Joltin’ Joe, and the Mick while Julia was in the womb. Suffice it to say that both parents were more than a little surprised on March 15 when one of the delivery nurses cried out, “It’s a girl!” But one look at those chubby cheeks and they were no longer surprised: They were in love.

Senior editor Katy Vine gave birth to Mia Garnett Sledge on March 28. Katy’s husband, filmmaker George Sledge, believes Mia has a promising future in the sound-effects field based on her ability to segue expertly from a horse’s whinny to a long gurgle. And while Mia does not yet resemble either parent, writer-at-large Suzy Banks offers this comfort: “She looks nothing like Winston Churchill.” The blue-eyed beauty is learning a flirtatious smile that ought to keep that comparison at bay for many years.

Leo Moses Silverstein entered the world on March 7 and over the past two months has made many contributions to the magazine, including burping, crying, mewling, and snorting in response to story ideas suggested by his father, senior editor Jake Silverstein. “Leo’s greatest asset,” Jake says, “is that he trusts his gut.” Stories he’s green-lighted include “Where to Eat (Breast Milk) Now” and “The Man in the Black Onesie.” Leo is proud to be his family’s first native Texan. His dad was born in California; his mom, Mary LaMotte, an editor at UT Press, hails from Pennsylvania. Sometimes he looks like a peanut.