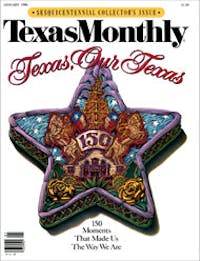 I’m talking about those who contributed to Texas chic, that virulent strain of cultural herpes that afflicted New York City a few years ago, when oil prices were high and Texas was booming and the Big Apple was on the verge of bankruptcy.

I don’t know who started it; maybe New Yorkers thought if they’d act like legendary Texans, then perhaps some of the legendary Texas money might rub off on them. Some say Texas chic began when a Fort Worth lass, Judi Buie, began hawking expensive cowboy boots from a posh East Side address. I first noted the impact in 1972 with the publication of Semi-Tough, the best-selling Dan Jenkins novel featuring one-liners from the mouths of two fictional macho pro football players from Forth Worth, Billy Clyde Puckett and Shake Tiller, along with a supporting cast of cosmic cowboys and “awl bidness” primitives. Soon a Manhattan waddy couldn’t mosey over to Elaine’s without hearing Billy Clyde and his buddies quoted. The sports bunch at P.J. Clarke’s drinking emporium picked it up; such jocks as Frank Gifford and Don Meredith plugged Semi-Tough on ABC’s Monday Night Football.

Meredith already had begun singing “Turn Out the Lights,” cracking his good-ol’-boy wisecracks, and swaggering through Manhattan in Larry Mahan hats and Judi Buie boots. Dallasite Mahan, several times World Champion Rodeo Cowboy, began peddling a line of Western wear to Yankees and himself posed for underwear ads while swinging a lasso and wearing only a big cowboy hat, boots, and snug-fitting briefs.

Herman Gollob, unrepentant Texas Aggie and New York book-publishing mogul—he unleashed Jenkins and Billie Clyde Puckett—began to take authors, ad men, agents, and other editors to lunch at a new restaurant. The Dallas Cowboy featured leggy waitresses done up in costumes like they’d just come from a hard day of barrel riding, and some of the worst alleged chili, ribs, and other Texas tasties ever foisted off an unsuspecting public. Herman, given that he is an Aggie, may not have known how dismal the food was; if he did, he didn’t tell his guests, and so the dumb Yankee bastards thought it was good and began steering their friends there.

I myself began swaggering through Manhattan’s stone canyons in cowboy clothes about 1965; never mind that I had not been on a horse since 1947 and then only long enough to fall off. Fellow writer and old friend Bud Shrake, himself writing Texas stuff in novels, films, and magazine articles, played cowboy with me. At six feet six before putting on his high-heeled boots, he fit the role perfectly. When he came to New York from Austin and the two of us made our nightly fun runs—asking one another loudly if he had the dope, the other one saying naw, dammit, he guess he’d left it in our Learjet—people didn’t know if the rodeo was playing Madison Square Garden or if we were on a buying spree for the Texas Mafia.

One afternoon in early 1978, shortly before the Off-Broadway opening of The Best Little Whorehouse in Texas (by yours truly, Peter Masterson, and Carol Hall), I was walking down a Greenwich Village street and spotted a new bar bearing the name “Lone Star.” Curious, I entered to find longneck Lone Star beer, something resembling chili, and Mort Cooperman, who said he intended to bring in live country-and-western bands from Texas and make a fortune. I thought, “This New York Jew’s gotta be crazy to open a shitkicker joint in the Village!” Next thing I know, Whorehouse is holding its first cast party at the Lone Star. Soon you couldn’t get in the place unless you begged.

Willie Nelson’s music began to take over the jukebox at Elaine’s and elsewhere. When he visited New York they let him in Sardi’s wearing his braids, patched overalls, sweaty bandanna, and scruffy tennis shoes. Everybody in the place wanted to meet him; people in tuxedos sprang to open doors for Willie and snapped their gold cigarette lighters in front of his face. The former Michigan State wrangler and Dallas Cowboy Pete Gent wrote North Dallas Forty, a novel full of Texas craziness that went on to become a big movie.

I think the real flowering of Texas chic occurred when Tommy Tune turned the dancing Texas Aggie football players into cowboys in a show-stopping number in Whorehouse. Almost immediately, New York disco dancers began to show up dressed like those Aggie cowboys. Soon the craze spread to the heterosexual community as well. It was the sight of a Wall Street dude dolled up like a rodeo cowboy—carrying his briefcase down Fifth Avenue—that inspired my nineteen-year-old son, Brad, who had dressed Western all of his life, to abandon his cowboy regalia. “When everybody else gets out of my costume,” he said, “then I’ll put it back on.”

We liked it, of course, even as we snickered at Damn Yankees trying to say “y’all” in acceptable accents and looking silly in cowboy hats. Imitation, after all, is said to be the sincerest form of flattery, and for many, many years New Yorkers hadn’t flattered Texas at all. We had to go hat-in-hand to New York banks for really big money, we had to romance New York editors to get our writing published, and too many haughty French waiters looked down their noses like maybe we’d come in wearing Big Mac overalls and brogans fresh-dipped in cow plop. Hell, we gave ‘em a president of the United States, and they laughed at him because he said, “A-rab” and showed everybody his operation scar and liked barbecue sauce. They treated us like a bunch of country bumpkins until they woke one day to realize we had snuck around and got chokeholds on their TV networks and publishing houses and had infiltrated their executive boardrooms and law offices. We stole airline headquarters from ‘em and some of their better bank customers. New Yorkers, on the other hand, couldn’t seem to clear Queens streets‘ of snow or get their garbage hauled or make their subways run on time. Those fool Yankees were imitating a fantasy Texas, of course, a Texas that never was or maybe barely had been—or at least one that failed to reflect our poverty pockets and ignorance or other shortcomings because we were careful to cover up our sins with whoopees and brags. And them suckers’ falling for our Camelot bullshit was maybe the sweetest thing of all.

Texas chic is gone now. Nobody knows why for sure. Perhaps when our rig count nose-dived we lost a certain advantage, though more likely it was simply time for the fad to end. The death of Texas chic was pleasing to many, Texans and non-Texans alike. Only those of us who got about half-rich off it feel like mourning.