Singling out the greatest Texas characters in TV history is tricky. You can’t have memorable characters without memorable—or in most cases, long-running—shows, which are pretty rare. For every Dallas there’s a Cutter to Houston or a Houston Knights or a Matt Houston. You could also fill a list entirely with Texas Rangers, especially if you include miniseries (e.g., Lonesome Dove and Texas). We stuck to episodic television, but still made room for three of the state’s talismanic law enforcement officers.

As the two best Texas shows to come along during the recent golden age, Friday Night Lights and King of the Hill could provide half a dozen entries just by themselves, but we decided to keep it to one entry per show. The best of these characters would be iconic no matter where they were from, but really, how could they be from anywhere but Texas? No state better lends itself to dreaming up larger-than-life figures.

Yup. He’s got the riding lawn mower, the dog named Ladybird, and the old high school football injury. Most days, he prefers to think inside the box. But Hank also married a Montana girl, found his way to yoga class, and put in his hours at the natural-foods co-op (to get himself some grass-fed beef). Created by Austin resident Mike Judge (Beavis and Butt-Head, Office Space) and TV pro Greg Daniels (The Simpsons, The Office), Hank is where the fifties Texas man transformed into the twenty-first-century American. He’s got a firm sense of right and wrong, a stubborn streak, and a truck. He’s a better father than his own father—it sure doesn’t come easy—not to mention fellow cartoon dad Homer Simpson. In fact, he’s more complex and three-dimensional than any TV dad since Bill Cosby. Hank was us, grappling with his family and a changing country just as surely as Duane from The Last Picture Show and Texasville. But sorry, Hank. Most Texans do prefer charcoal.

The secret of Friday Night Lights: It’s actually a chick show. The secret of Texas: The women are in charge. Tami is both a small-town society wife (much as she strains against those obligations) and a no-nonsense Ann Richards stateswoman as high school principal. Sometimes she is a paragon of supportiveness and understanding; other times she’s easily frustrated by her teenage daughter and football-focused husband. Much like her laconic other half, she can be a woman of few words. She’s “Mrs. Coach” but not a booster—the one person in Dillon who doesn’t think football is the most important thing. Friday Night Lights is about a lot of things other than football, but the one subject that recurs throughout is parenthood. Tami is the mother to us all.

He’s one sorry human being: a vain, selfish workaholic who cheats on his wife repeatedly and widely; treats his family like crap; and thinks that he’s above the law. And yet you always secretly wanted him to get away with it all. In other words, he’s a lot like Tony Soprano or Don Draper. Though Dallas may not have the psychological complexity of today’s dark TV cable shows, you can’t say J. R. Ewing wasn’t ahead of his time. The ultimate villain was practically an accident—the show was originally meant to focus more on Pam and Bobby—and so was the ultimate TV cliff-hanger (the “Who Shot J.R.?” story was created in a rush, because the network wanted two more episodes that season and because Hagman was about to hold out for more money). Hagman’s deliciously evil, undeniably charming snake-oil salesman upped the ante on prime-time bad behavior. You’d like to think that if the show were on today, J.R. would own a Dallas sports team.

Most of the action in the great TV and movie westerns happened in Arizona, Colorado, New Mexico, or just the generic frontier, but The Lone Ranger was always ours, starting with the radio show in 1933: Texas Ranger captain Reid, the lone survivor of an ambush by the Cavendish gang, who killed five of his compadres, including his own brother (in the pilot, Tonto helps him make the mask out of his dead brother’s vest). He vows to clean up the Southwest Territory on his own, without shooting to kill. Six decades later, the show seems rudimentary and also rather campy, but high-minded frontier justice never goes out of style, and that mask is more recognizable than anybody’s cowboy hat.

When it comes to Texas blondes, truth has always been stranger (and funnier and sexier and sadder) than fiction, from Farrah to the Cowboys Cheerleaders to Anna Nicole Smith. No TV writer could have come up with a dad who brags to the media about his daughter’s “double Ds,” as Joe Simpson infamously did. Playing herself, Jessica was powerfully gorgeous, famously scatterbrained, and admirably incapable of hiding her thoughts, however spoiled or dumb (“Is this fish or chicken?” she once asked, while eating a bowl of tuna. “I know it’s tuna, but it says ‘Chicken By the Sea’”). She was a screwball heroine, with dim-bulb frat boy Nick as a fine foil, and the fact that their unequal, often dreary marriage didn’t take gives the show something like posthumous poignancy. Nobody much liked the “sequel” with Tony Romo, though.

Just knowing that he had a first name kind of ruins the badass factor, doesn’t it? This show was extremely popular, both with the older viewers, who once ate it up in prime time, and with the kids, whose ironic appreciation has helped create one of the most robust Internet phenomena of recent years, Chuck Norris Facts (e.g., “Chuck Norris has to use a stunt double to do crying scenes”). So it’s almost startling to note how dated and badly acted Walker, Texas Ranger really was. Norris—an Oklahoman, it’s worth mentioning—gives line readings that sound as if they were dubbed by the same guys who do Asian action movies. The show was set and filmed in Dallas but could have just as easily been in the San Fernando Valley. And the plausibility factor . . . well, just go watch the episode where Walker goes undercover as a Mexican peasant, crossing back over the border to shut down an immigrant slave ring. For this show to have endured is a tribute to the romance of the Texas Ranger— and to the undeniable glinty-eyed toughness of Norris.

This is the image that your New York cab driver pictures when you tell him where you’re from: a shameless and exaggerated yet consistently hilarious caricature of every vulgar oilman (“Back in Houston, we call that a Fort Worth shampoo,” he says after bathing his rival Mr. Burns in crude), country club Republican (he was secretly born in Connecticut), or chamber of commerce blowhard (his daughter is named Paris Texan). Rich Texan has shown off an evil side—his “lucky” hat became that way because he wore it on the day that JFK was assassinated—but he’s really a good guy at heart. And his irrepressible joy—he expresses jubilation by firing both guns and shouting, “Yeehaw!”—is infectious, overpowering, and friendly, just as we all aspire to be.

It’s a reflection of the state’s political influence that Smits’s Houston-mayor-turned-congressman-turned-president had such a huge role in Aaron Sorkin’s liberal wish fulfillment, even if the show remained more intrigued by its campaign operatives than its politicians. Santos, basically Henry Cisneros as Barack Obama, played the part with an eerie prescience of how the country’s first-ever major-party minority presidential nominee might navigate the then-unprecedented waters. Sorkin’s fantasies run deep: Santos was preceded on the show by Tim Matheson’s senator-turned-vice-president. That’s right, a Democratic senator from Texas (was he elected in the seventies?). And then a Democratic Hispanic president from Texas. In twenty years, that may even come true (ten, if his name is Bush).

Medium is based on the life of Phoenix psychic Allison Dubois, who claims that her first work with law enforcement involved helping out the Texas Rangers. Hence Ranger captain Kenneth Push’s scenery-chewing guest role, a time-honored tradition that is as much a part of the fabric of series television as main characters and regulars. There’s a reason the Emmys have a category for such turns. Arliss Howard’s deeply lived-in performance gives us the modern Ranger: vulnerable (he’s had two heart attacks), formal (balding, he still uses a comb before taking a suicidal risk), and as cerebral as he is heroic, just another employee of the Texas Department of Public Safety trying to do his job. It’s a good part made great thanks to a gifted actor (who also happens to be Mr. Debra Winger). And Captain Push’s mustache has at least as much personality as Walker’s beard.

The show that broke ground by bringing viewers inside the funny, charming lives of gay men in New York City also launched one of the sturdiest and more entertaining TV Texans. Will’s first-season client—he was even the fifth cast member for a while there—is no more than a comic version of the old T. Boone Pickens archetype: boots on the desk, big ol’ accent, uncomfortable but not judgmental about New York City and his lawyer’s sexual preference. What gave the character staying power is that it literally had staying power: The Mississippi-born Grubbs went on to play another Texan, on Joss Whedon’s Angel, and then essentially reprised his Polk role as The O.C.’s Gordon Bullit, a loudly, proudly Texas whateverionaire who prefers to call himself “the Bullit.” As Rich Texan might say, “Yeehaw!” 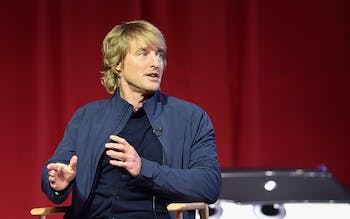 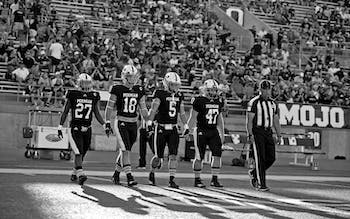 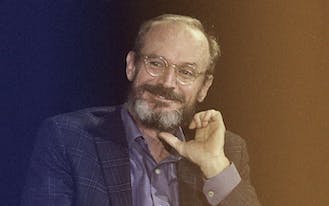