PETER PAN DID GROW UP—IN WEATHERFORD. That’s the hometown of Mary Martin, whose most memorable role in forty years of singing and dancing was that of James M. Barrie’s airborne scamp. “Hollywood studios kept trying to make me into a glamour girl,” she recalled of her lackluster film career. But the petite actress knew her forte was live performance and, after a stint as a cabaret headliner, Broadway became her domain. She starred in the original productions of many musicals that are now chestnuts—South Pacific, I Do! I Do!, The Sound of Music—and, thanks to her talent and her Texas charm, the veteran trouper ultimately acquired three Tony and two New York Drama Critics awards.

She was born Mary Virginia Martin in Weatherford on December 1, 1913. She married at age sixteen and became a mother at seventeen. Her son, Larry Hagman, grew up to star in TV’s I Dream of Jeannie and Dallas.

At eighteen she opened her own dance school; branches in Mineral Wells and Cisco followed. Her first professional gig was singing at Mineral Wells’ Crazy Water Hotel. She was billed as “the Crazy girl.”

In 1935, having decided to divorce, she moved to Hollywood. After moving again, this time to New York, she won a part in the 1938 Cole Porter musical Leave It to Me; a suggestive rendition of “My Heart Belongs to Daddy” proved to be her big break.

Her touring production of Annie Get Your Gun premiered in Dallas in 1947. Stanley Marcus of Neiman Marcus ordered hand-painted Annie handkerchief dolls as mementos for the cast and crew.

She created the role of Nellie Forbush in Rodgers and Hammerstein’s South Pacific in 1949. During its two-year run, she sang “I’m Gonna Wash That Man Right Out-a My Hair” while shampooing onstage more than one thousand times. She also was the first Maria von Trapp in The Sound of Music (1959).

In 1954 she opened in Peter Pan. Then forty years old, she wore a girdle on her chest to flatten her breasts. Once, an enthralled stagehand who was supposed to manipulate her “flying” harness forgot his cue, believing Peter was truly aloft. Martin crashed into a wall and broke her arm.

When not performing, Martin vacationed at her Brazilian jungle estate. She died in Rancho Mirage, California, on November 3, 1990. 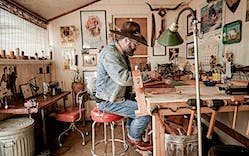 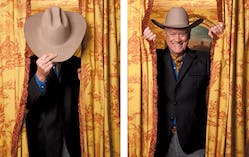