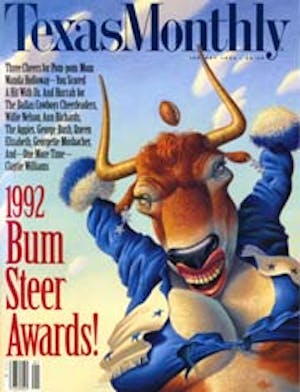 I live just like I have for the last ninety-one years. Nothing’s different, except that I’m older and I’m having more fun,” says Angie Runnels with a fetching smile and a hush-my-mouth Southern accent. The Houston McDonald’s employee is one of the oldest workers and certainly the most celebrated in the hamburger franchise. She is featured in a national commercial, went to Hollywood for an appearance on To Tell the Truth, flew to Chicago for a talk show cameo, and is a fixture at various McDonald’s-related events, church bazaars, and elementary school show-and-tells. The great-grandmother of ten squeezes her extracurricular activities in around her Monday-Wednesday-Friday schedule, and in nearly a year of employment she hasn’t missed a day of work.

Restaurant owner Joe Wymer admits that when his manager told him she had hired Angie, he might have overreacted: “I asked her if she was crazy.” But seriously, he adds, hiring people like Angie represents a growing trend in graying America. “We are looking for alternative ways to be competitive. Older workers have stability, a good work ethic, and they add maturity to a young staff.” Besides that, Wymer adds, “She’s a media dream.” Angie’s presence at his McDonald’s, at 1619 South Loop West, has been a bonus: “I can’t believe how many people come in here looking for her—people who don’t know her and people who knew her fifty years ago in Shreveport.”

Angie got her job at McDonald’s by accident—literally. A new resident at the retirement home where Angie lives had asked Angie to accompany her to the grocery store. They proceeded down South Loop until the car started “jumping and dancing around before it stalled out completely under the overpass in five o’clock traffic,” Angie says.“You can imagine the horn-blowing.” The car finally broke down just across the street from Wymer’s McDonald’s. The pandemonium alerted the store manager, who came to the rescue. While waiting for a tow truck, the manager mentioned that good workers are hard to find. Angie volunteered, “I’ll help.” The manager responded, “I’ll hire you.” Angie then demurred, confessing that she was ninety, but the manager still insisted she would hire her. So the retiree, who had spent the last seven years “just sitting around,” filled out an application, got a ride home, and confided her newfound luck to a friend, who immediately called all of Houston’s television stations and newspapers.

Nattily dressed in a navy-and-white linen outfit, Angie now greets customers and wipes tables. “I like the busy days,” she discloses, “like the time a hundred and twenty schoolchildren came in here unannounced. I get tired when business is slow.” Many years of working in food service—she owned a catering business and the Wings restaurant in Hobby Airport for years—prepared her for dealing with the public. She also goes to exercise class three days a week and maintains a walking regimen. Sage advice from her mother, a widow who raised ten children, has stood Angie in good stead: “My mother taught me never to say ‘I can’t.’” As for her future, Angie warns, “I’ll work until they fire me.” But Wymer laughs and says, “They’d probably fire me first.”