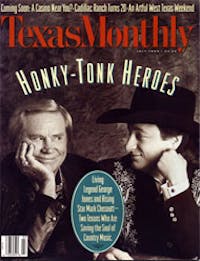 Vintage and timeless, Cadillac Ranch just turned twenty years old. Ten Cadillacs headed west are buried hood-down in a row, their tail-fins silhouetted against the Panhandle sky: “The hood ornament of Route 66,” as one of its creators dubbed it. Cadillac Ranch became a national symbol practically from the moment of its birth in a Texas wheat field in June 1974. The last monument Texans embraced so wholeheartedly was the Alamo. But Cadillac Ranch had its photographer; the Alamo had none.

Cadillac Ranch began as a collaboration between Amarillo’s eccentric emeritus, Stanley Marsh 3, and a San Francisco-based designers collective called the Ant Farm. In 1970 Marsh had undertaken his first major pop art project, building what he called “the world’s largest soft pool table” on a farm outside Amarillo; shortly thereafter, the Ant Farm was constructing its self-styled “house of the century” in Houston (which resembled a “praying mantis eating a Volkswagen,” Marsh says). Eventually, the creators of both architectural whimsies exchanged letters. Next, Marsh offered a piece of land for a then-undetermined art project, and soon thereafter three members of the Ant Farm pulled off the interstate eight miles west of Amarillo to examine a featureless stretch of plain. Ant Farmer Doug Michels remembers the moment: “To me, it was a dolphin idea. Chip Lord, Hudson Marquez, and I were standing in a wheat field off Route 66 in the rain. And you know how the wheat waves and ripples in the wind? Well, suddenly we imagined a dolphin tail fin sticking up out of the wheat. Then the dolphin tail fin became a Cadillac tail fin. That was it. There was Cadillac Ranch.”

Marsh loved the concept, particularly since the chosen site lay just off Route 66 (now Interstate 40). Twenty years later, he still waxes enthusiastic about the Cadillac Ranch credo, “What makes America the best country in the world is the car,” he says. “In Germany, Africa, China, or Russia kids grow up thinking they’ll have a house someday. But American kids dream that they’ll have a car. A car represents freedom, romance, money. You can head west to Las Vegas, where you can break the bank, then go out to the beach in California and become a movie star.”

The Ant Farmers proceeded to make their idea a reality. Marsh provided beer, money, wheel greasing, a red flatbed for hauling Caddies, and two photographers, Wyatt McSpadden and the late Don Reynolds. In the intervening two decades, the 41-year old McSpadden, who now lives in Austin, repeatedly photographed the Cadillac Ranch, even featuring it on his wedding invitation. Naturally, he took along his camera in June for the twentieth-anniversary party Marsh sponsored on-site (which included a chance for guests to spray-paint congratulatory messages on the freshly whitewashed cars). McSpadden’s portraits of Cadillac Ranch as a monument have been widely reproduced. But the pictures on these pages—never before published—document the making, humorous and historical, of a genuine American icon.