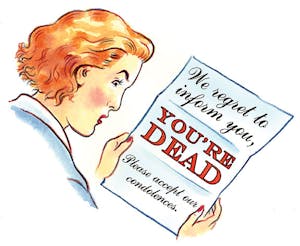 A Cypress woman underwent plastic surgery so she would look like Melania Trump.

A woman in Waco called 911 from a fast-food drive-through because her order of chicken nuggets was taking too long.

Aid worker and Texas A&M grad David Eubank rescued a young Iraqi girl by carrying her through gunfire on the streets of Mosul.

When Dallas police responded to a call from a woman who thought someone was breaking into her car, they found two loose cows by the vehicle instead of a burglar.

An Austin man sitting in the passenger seat of a friend’s car seriously wounded a bicyclist when he allegedly fired a shotgun at him just to “blow off steam.”

A Euless woman was surprised to receive a letter from her health insurer claiming that she had passed away.

After their wedding was postponed because the groom required surgery, an Amarillo couple decided to get married in the hospital room.

A man in Odessa legally changed his name from Ernesto Acosta to Ernesto Trump.

An Unforgettable Texas Tale of Envy, Embezzlement, and Fruitcake

A Texas Man Discovered an Old Boat in the Attic. Now What?

By Bob Phillips, as told to Katy Vine
Arts & Entertainment