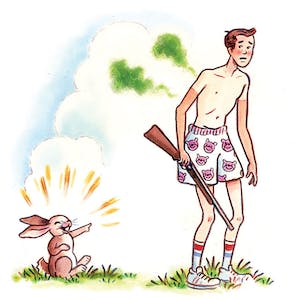 A Brooklyn woman used funny photos of an eighteen-pound cat to raise more than $20,000 for Hurricane Harvey victims.

The number of Kemp’s ridley sea turtles’ nests discovered in Texas since April reached a record-breaking 353.

A teenager in Fate—wearing polka-dot boxers because he’d stripped down after being sprayed by a skunk—received a citation for illegally hunting rabbits.

A former Santa Claus impersonator pleaded guilty in San Antonio to charges of growing more than a hundred marijuana plants.

A woman led Lufkin police on a 23-minute, 100-mile-per-hour chase after slipping out of her handcuffs and stealing a patrol unit.

The tiny North Texas town of Mustang was put up for sale at a price of $4 million.

A suspected robber in Lubbock held up a Burger King, then waited for his bacon cheeseburger order before fleeing.

Texas Wesleyan University fielded a football team for the first time in 75 years.

By Bob Phillips
Meanwhile in Texas

Meanwhile, in Texas: Twenty Tons of Pineapples Spilled Onto a Freeway

Meanwhile, in Texas: Roads Melted in the Excessive Heat

By Bob Phillips
Meanwhile in Texas

Meanwhile, in Texas: A Great Dane in Bedford Set a World Record