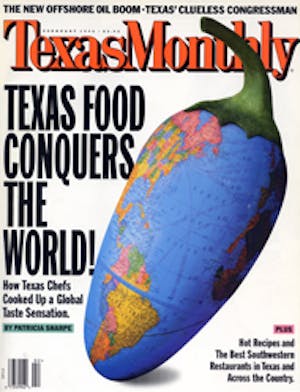 DAVID BONDERMAN IS little known outside of Texas. The Fort Worth financier, a onetime adviser to billionaire Robert Bass, doesn’t even talk to the press. Yet the recent investments made by his $720 million Texas Pacific Group make it unlikely that the 53-year-old will remain anonymous for long.

Consider the reported tab run up by Bondo (as his friends call him) in the second half of 1995 alone. In July he paid $320 million for 20 percent of Britain’s MGM cinema chain. In September he paid $115 million for a Florida holding company and $250 million for 78 percent of Kraft’s caramel and marshmallow division. In November he paid $40 million for 45 percent of a Canadian oil company and $350 million for a majority stake in Nestlé’s wine division; also that month, he and Virgin Atlantic Airways CEO Richard Branson started talking about launching a no-frills airline in Europe. And in December he looked into buying Anheuser-Busch’s ailing Eagle Snacks line.

Who is the man who cut these deals? A Los Angeles native, Bonderman earned a degree in Russian studies from the University of Washington and then immersed himself in the law: He studied it at Harvard University, taught it at Tulane University, enforced it in the civil rights division of the U.S. Justice Department, and studied it again in Africa. Later, he practiced it at the Washington, D.C., firm of Arnold and Porter, where he built a reputation as shrewd and fast-thinking—and altruistic. In 1978 he argued before the U.S. Supreme Court to keep the Grand Central Terminal’s beaux-arts facade from being demolished.

This pro bono work caught the eye of Robert Bass, who in the early eighties was fighting the destruction of historic buildings in downtown Fort Worth. The two men became friends, and in 1983 Bonderman signed on as his lead financial adviser, pulling in, by one account, investment returns of 75 to 100 percent. Nine years later Bonderman and James Coulter, another Bass adviser, made a deal of their own, paying $450 million for 29 percent of Continental Airlines, bringing it out of bankruptcy. Soon after, they formed Texas Pacific with William Price, formerly of GE Capital Corporation. Today they own 20 percent of Continental, and Bonderman serves as the chairman of its board and one of its chief micromanagers, weighing in with staffing and menu suggestions.

While the rest of Bonderman’s story is closely held, a few other details are known. He loves rock and roll; he recently flew to Phoenix with his three daughters for a Rolling Stones show. He drinks Diet Coke. He wears colorful socks. And he’s an adventurous world traveler—he even speaks the Central Asian dialect Urdu. “I’ve never experienced the ‘off’ position with him,” an old pal says. “It’s always fast and faster.”