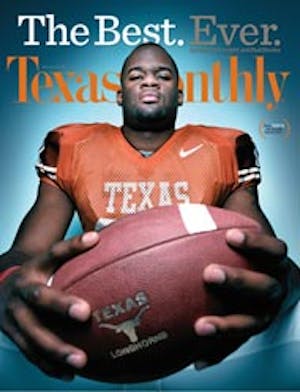 texasmonthly.com: When and how did you first hear about the “Kiss and Kill Murder” in Odessa?

Pamela Colloff: A friend of mine, Monica Walters, sent me an e-mail last spring about a book that a former professor of hers had written called Washed in the Blood. She said that I had to read it. The professor turned out to be Shelton Williams, Betty’s first cousin. The book, which I read at Monica’s urging, was Shelton’s memoir about growing up in Odessa, his memories of Betty, and how her murder had impacted his life. I was completely fascinated by the subject, and I read the book in one sitting. Afterward, I got in touch with Shelton, and we had quite a long conversation about it. I asked him if he would be comfortable with me writing a story about Betty and the “Kiss and Kill” case. He said yes, and that he thought it was an important story for people to know more about.

texasmonthly.com: Since the subject of your story, Betty Williams, has been deceased for quite a while, how did you approach reporting this story?

PC: A lot of my reporting time was spent trying to track down Betty’s old classmates. This was more difficult than you might think, since nearly everyone I was trying to find had left Odessa, and because Odessa High School doesn’t keep any kind of alumni registry. I sent out a lot of letters and e-mails, and got only a few responses. But the few responses I did receive helped lead me to other people, and then to other people, and so on. Also, I was able to get a real sense of Betty from her letters that were in the case file. All in all, there were 28 letters written by her. So that gave me a feel for what she had been like.

texasmonthly.com: You were able to find some of Betty’s peers from high school. How hard was it to track them down. Some of Betty’s classmates refused to be identified in the story. Did you get the impression that this story is still very much alive in Odessa?

PC: Yes. I was surprised at just how many people did not want to talk about this case, even 45 years later. Some people were very protective of Mack, even if they weren’t in touch with him; others still had very strong negative feelings toward Betty. What was interesting to me was how vividly everyone remembered that time and what had happened; during interviews, it never sounded like people were talking about an event that had happened nearly half a century ago. It still seemed very immediate.

texasmonthly.com: What intrigued you most about Betty’s story?

PC: A lot of things—among them that Betty asked students to kill her, and that Mack was acquitted, twice. But I was the most interested in the fact that Betty did not conform to the expectations of the time, and that she paid a price for that. I kept wondering how her life might have ended up differently if she had been a senior in high school ten years later. Would she still have been judged as harshly for being promiscuous? Would the students around her have had more awareness about depression, and have tried to get her some help?

PC: Not being able to talk to Mack. I sent him several letters, and I knocked on his door four times when I was in Odessa, but he never responded. Neither did any of his family members.

texasmonthly.com: How did you decide to write Betty’s story the way you did?

PC: I thought it was important to use Betty’s letters in the actual article so that people could get an idea of what she was like. Also, I decided to frame the narrative with the ghost story not because I necessarily believe that there is a ghost who actually haunts Odessa High School, but because I wanted readers to see what an enormous impact this crime had on that community.

texasmonthly.com: What was the most interesting thing you learned while working on this feature?

PC: There were so many fascinating Warren Burnett stories that I didn’t have room for. His biographer, Dave Richards, was kind enough to send me an unpublished Life magazine profile about him that focused on the second trial, in Beaumont. I had very little space to write about the Beaumont trial, but according to the unpublished Life article (which was written by a writer named Holland McCombs), Burnett used to have Mack shave twice a day during the trial so that he would look younger than he was.

PC: Not really, only because I want the story to speak for itself. Everyone has different opinions about this case—and of Mack and Betty—so I hope it gets people talking.