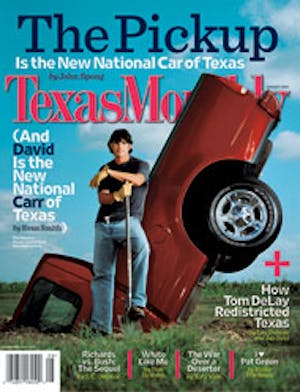 Billy North finished sixth in overall point standings in the Outlaw Division at the DallasWakeboarding.com 2004 Tournament Series. The twenty-year-old Austinite plans to compete in the Vans Triple Crown of Wakeboarding event in Indianapolis August 19­22.

How did you get interested in wakeboarding? I grew up skating; that’s all I ever did. One day my dad brought home a wakeboard. I was twelve or so and had never seen one before. I went out, got up on it, and I liked it. I kind of threw it away for a little bit and didn’t get back on for a few years. But then we bought a new ski boat, so I got a new wakeboard and got hooked.

Have you always been good at wakeboarding? I was like anybody else who has just started to learn how to wakeboard. I learned to get up, ride around on the board, and jump the wake. I just kept on progressing. There are periods where instead of trying to learn a new trick, I will try to perfect other tricks. Every time I ride, I change something.

What’s it like to be a wakeboarder in Texas? Is it challenging? Yeah. It’s real hard. Orlando is the mecca of wakeboarding. That’s where everybody is; that’s where all the sponsors are. California is a good place to be too. The West Coast is always a good place to be, you know? I try to do as much as I can and show people that I am trying to work hard down here and get Texas big. But at the same time, it’s cool because you watch Texas grow and you know that it’s you and your friends doing it.

In 1947, three years before Cypress Gardens hosted the first barefoot waterskiing competition, Dick Pope Jr. became the first person to step off a ski. Well, maybe. Some believe that honor goes to A. G. Hancock. There’s no disputing, though, that the sport has come a long way since those early days in Winter Haven, Florida, when a short ride and a wave to the crowd were enough to win a tournament. Today, the world’s top-ranked barefooters pull off unbelievably complicated tricks and radical jumps, sometimes sailing a distance of up to ninety feet from the ramp at roughly 40 miles per hour. August 11­14 you can see some of the best of the best—Keith St. Onge, Ron Scarpa, Lane Bowers, and Rachael George—in action during the 2004 Barefoot Water Ski National Championships at the Aquaplex, just outside Austin.