By Katy Vine
From “The Martian,” originally published in February 2018

In a cavernous warehouse behind a strip mall about three miles from the Johnson Space Center, Franklin Chang Díaz has been tinkering with an unorthodox idea for the past thirteen years. The lab for his eleven-person company, Ad Astra, is roughly the size of a Barnes & Noble. But in the center of the room, rather than rows of romance novels, there are three stacks of gadgets resembling hi-fi stereo components. Along the back wall is the main event: a forty-ton stainless-steel cylindrical chamber that sits like a thirteen-foot-tall beer keg tipped on its side. If Franklin is right, this is the engine that will take us to Mars.

By Dan Solomon
From “How Do We Feel About Space Exploration Companies Buying up a Bunch of Cheap Texas Land?,” originally published in November 2013

If you pass through Van Horn, you might be surprised to encounter the beautiful and historic Hotel El Capitan, which was [recently] renovated to the tune of $2.5 million. There’s little that makes Van Horn, whose per-capita income is $13,775, an obvious location for a higher-end hotel with an upscale restaurant/bar on its ground floor. But if you spend an evening in the Hotel El Capitan bar, you’re likely to get your first clue: there will probably be some contractors who work with Jeff Bezos’s Blue Origin aerospace company enjoying steaks and watching basketball, before heading out in the morning to install, say, a liquid nitrogen system at the “Corn Ranch” facility that Blue Origin operates nearby.

By Domingo Martinez
From “Countdown to Liftoff,” originally published in August 2016

While an environmental-impact statement produced by the FAA acknowledges that [SpaceX’s launchpad] will bring traffic and noise to the Las Palomas Wildlife Management Area–Boca Chica Unit and the Laguna Madre, it seems a bit optimistic about lasting consequences. It projects that wildlife habitat will shift naturally and wetlands will hardly be affected. Larger birds and animals—the piping plover, the northern aplomado falcon, the ocelot and jaguarundi, the sea turtles—won’t be affected, it says. Only time will tell whether this turns out to be true. Still, it’s a risk that needs to be taken: compromise is the way of the world, and for [Brownsville] to move into the now, the now needs the beach.

That’s Not How Bruce Willis Did It in the Movie

By Madelyn Herzog
From “NASA Presentation on Asteroid Detection ‘Not Reassuring,’ ” originally published in March 2013

In a presentation to the House, NASA officials revealed their plan of action if they were to discover an asteroid three weeks away from obliterating the Earth: they would “pray.”

This article originally appeared in the July 2019 issue of Texas Monthly with the headline “From the Archives: To the Future!” Subscribe today. 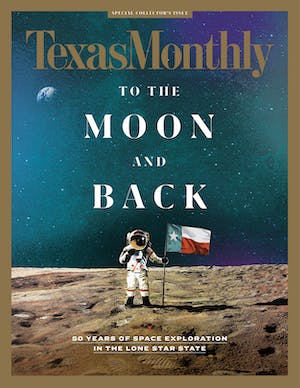