Callie Flores is one of those high-achieving high school students whose weekly schedule might make you wonder when she finds time to sleep.  A junior, she plays alto saxophone in the Temple High School jazz band and marching band, which means sometimes she gets up at five in the morning for practice. She takes courses for college credit. She’s a worship leader at Temple’s Bethel Church, attending every Sunday and Wednesday and singing in a praise band. She wants to work in ministry herself someday, whether through performing music or teaching art.

This October, though, acting has taken over her busy schedule. She’s playing one of the lead roles in Bethel’s Hell House, a faith-based haunted house the church community puts on yearly in the weeks before Halloween. This isn’t a typical haunted house with ghoulish frights and chainsaw-wielding actors. Bethel’s Hell House is a series of jarring “real-life” scenes meant to scare the thousands of people who will pass through during the two-week-long run and to remind them that Hell is a real consequence of poor life decisions.

Some of the scenes depicted, like drunk driving and domestic violence, are actions that a lot of parents might be comfortable discouraging with fear. But others—including suicide, homosexuality, and abortion—have led critics to accuse Hell Houses of stoking the culture wars. This may be especially true in a year when a candidate for Texas governor has been vilified by pro-life advocates.

All the more inspiration for Callie, who is playing one of the lead roles. She’s the girl who gets an abortion and then, horrified by her own decision, shoots herself in the head. The Hell House is rated PG-13.

Now widespread across the United States, Hell Houses began with “Scaremare,” designed in Virginia in the seventies by pastor Jerry Falwell’s followers. A pastor in Colorado accelerated their spread when he developed a $299 kit with scripts and sound effects that any church could purchase. The best-known Hell House is probably the one in Cedar Hill, near Dallas, which was the subject of a 2001 documentary.

You don’t have to look hard to find criticism of Hell Houses, many of which frame homosexuality as a choice and AIDS as divine punishment. A report by the National Gay and Lesbian Task Force accused them of “fueling the harassment and violence many [gay and lesbian teens] experience on a daily basis” and argued that “religious leaders who youth trust should be held accountable for the moral and ethical questions these programs raise.”

Matt Baumgartner, the youth minister at Temple’s Bethel Church and a man who has the big, sporty friendliness of an ex-lineman, told me that the big difference between this Hell House and others is their intention to have an open, tolerant attitude. “It’s not our goal to be controversial,” he explained. “We’re not trying to incite gays and lesbians against us. We’re just trying to deal with issues that are relevant.”

And there’s no question subjects like teen pregnancy and drug use, as well as sexual identity, are especially relevant to pre-teens and teenagers. Effectively communicating danger to this age is notoriously difficult, and has spawned myriad after-school specials, ad campaigns, and other attempts to teach kids lessons without seeming condescending. Baumgartner is clearly gifted this way. Watching him interact with the kids revealed him to be immensely caring. He knows how to ask a kid, “How are you doing?” or “You all right, dude?” in a way sure to get them to open up about their hopes, fears, and doubts. He wants to bring this same attitude to Hell House audiences, for people to come away more aware of how their actions affect others. “It’s not our place to judge people. That’s some peoples’ idea of what we’re doing,” he said, eager to explain the difference between shaming and encouraging.

The goal is to get people to realize that their actions are choices, and that they always have the opportunity to transform. “You have to make it as real as possible, so people think, ‘Yeah, that happens in my life,’” Callie told me, sitting in the church’s cafe, a room with deep red walls and a big art deco bar that would soon double as an abortion clinic. “I’ve seen people change,” she added with a big smile. “It’s really awesome.”

Most churches construct Hell Houses to include a collection of unlinked scenes, but Bethel follows the story of one family. As the audience walks through the rooms, they meet two daughters abused by an alcoholic father and an irresponsible mother. One of the daughters escapes the domestic strife by talking with a stranger online. Eventually, they meet, and he murders her.

The other daughter, played by Callie, gets pregnant by her jock boyfriend, and then has an abortion with her mother’s encouragement. The two of them get in a car wreck, the mom dies, and the daughter shoots herself with a gun left in the glove box. Left alone, the father realizes that the family came undone when he began drinking. He hangs himself. We’re left assume they all wind up in Hell, which is depicted in the final room with pulsing strobe lights, cages filled with chained-up sinners, and incessant screaming.

“As crazy as we can make the scripts, someone will say ‘That happened to me,’” Baumgartner said. “For a lot of us this hits close to home.”

Baumgartner’s dilemma over how to be both tolerant and open while still messaging that these scenarios of moral turpitude have eternal consequences is perhaps most clear in the transformation of the abortion scene over the years. At the church’s first Hell House twelve years ago, the girl getting an abortion had been raped. They depicted a “grizzly botched abortion” with “cherry pie filling everywhere.” Now, the girl has sex by her own choice, and the abortion is not depicted directly; Callie will simply scream in anguish from another room as we remain in the abortion clinic’s lobby.

I asked if the Texas Legislature’s recent battle over abortion laws affected the presentation, and Baumgartner said their goals were to strike a personal note, not a political one. “We may never change the law, but we know we change the lives of girls who see these scenes,” he told me. He described girls who have abortions scheduled and after seeing the Hell House decide to carry their babies. He described others who had abortions and became suicidal. At the end of the Hell House is a prayer room, where ministers connect these girls, and others affected by the scenes, to resources for help.

Callie’s friend Bekah Hudson is a senior who’s been attending this church most of her life. The Hell House is “a family affair”: her mom cooks, her dad runs security, and her grandmother helps tend the nursery for other volunteers. She worked the Hell House concession stand in sixth grade, and ever since seventh grade, she’s performed in various roles. She’s playing a “Death Monitor” (“DM” for short), which means she’ll cover herself in a black cloak and act as a sort of demon, encouraging Callie’s character to continue on her road to perdition. “Last year, I persuaded a guy to rape his girlfriend,” she said, describing her role. “I got in the mind of the girl and got her to have an abortion.”

Baumgartner and the other ministers are sensitive to the emotional toll this kind of acting can take on high school students. Breaks are frequent and everyone has a lot of nights off. “They have to be able to detach,” says Dylan Johnston, another minister. “We don’t want it to bleed over, Black Swan-like.”

Two nights before the first audience would walk through, Baumgartner led a brief worship service in which Callie and Bekah performed loud, rocking covers of popular Christian songs. “God, on our own, this is just a bunch of boards and a bunch of plastic bags and some poorly written lines,” he said as everyone bowed their heads. “Lord, we’re not here because we want to condemn anybody. We have no place to do that. Surely, there is not one of us here who has not sinned.”

Afterwards, Callie and Bekah rehearsed the bedroom scene, in which Callie would have a nightmare and the audience would learn that she had become pregnant. Bekah stroked Callie’s hair. “Sweet dreams, little princess,” she said. “Daddy’s little girl is just misunderstood, isn’t she?”

Callie’s eyes widened. Her scream was ear-piercing. “What’s going on?” she shouted. “What’s happening to me?”

Bekah burst with laughter, breaking the spell. They discussed how to emotionally involve the audience. “You could fall onto the floor,” Bekah suggested to Callie, who was experimenting with kneeling at a floor length mirror and clawing at her own face.

Although this particular portrayal of teen pregnancy is extreme, Callie told me she wants the scene to show other teenage girls that emotional crises are common among their peers. Bekah nodded in agreement, adding, “Here they realize it’s not just them.”

Two nights later, I returned to Temple and went through the Hell House on its first public run. Another girl was playing the lead part for the first show; Callie’s had to perform in the marching band at the Temple High School homecoming game.

Some of the transitions were still rough, and some of the actors had trouble with their lines, but no matter: a group of a dozen youth from a church in Calvert, Texas, sixty miles away, were petrified. The scene of Hell was a sensory overload, with a thick cloud of fog and young children in goblin masks circling around audience members, and Satan in a black suit and red shirt on a platform high above it all mouthing along with a pre-recorded voice slowed down to a rumbling roar.

This was scary, for sure, but I found Bekah the most unsettling. In the black cloak she looked tiny and otherworldly, ratcheting up her voice to a demonic squeal. I had watched her goof off with Callie two days before, but I still got shivers as she stroked the lead girl’s hair and whispered, “Sweet dreams, little princess.”

The next night Callie had her debut. In a post on Facebook, someone wrote of the performance, “She pulled that off like a boss!!!.” Callie responded, “Lol it worked!” 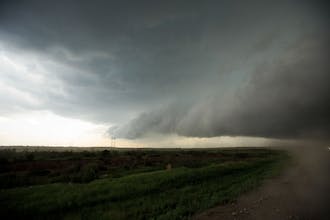 A Texas Couple Got Engaged in Front of a Tornado 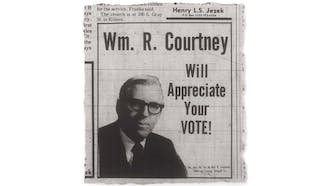