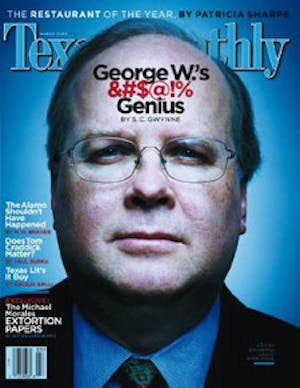 AT THE WHITE HOUSE RECENTLY, as I was advising the president on Iraq, I thought I heard him mention putting me in charge of the National Park Service. It’s about time he appointed a real cowboy, I said to myself as I adjusted my fanny pack. I knew, of course, that this would not be a Cabinet-level appointment. I would probably have a portfolio of some kind, a small staff of busy little bureaucrats to do all the work, and I’d no doubt carry the title of Undersecretary. That was fine with me. I’d probably be spending most of my time under my secretary anyway.

As I left the East Wing, I became more and more certain that, if not exactly offering me a position, the president was subtly encouraging me to get back into politics. I’d been on hiatus since my unsuccessful campaign for justice of the peace in Kerrville in 1986, but that was then and this was now. I remembered a letter he’d written me soon after he got elected. He thanked me for mentioning his name in this column “without using any curse words,” and he asked me if I intended to run for J.P. again. On a cold day in Jerusalem, I’d told him. Now, after practically getting vetted by the leader of the free world himself, I found myself standing ready to serve. I waited in the full-crouch position for a call from someone in the administration. When it didn’t come, I couldn’t decide whether to kill myself or get a haircut.

There must be a place in politics for a man of my talents, I thought. Dogcatcher might be a good place to start. I could free all the dogs and encourage them to lay some serious cable in the yards of people I didn’t like. Or maybe I could run for mayor of Austin. I could fight against the fascist anti-smoking laws. I probably couldn’t win without appealing to all the techno geeks, but a good slogan would help—something like “A cigar in every mouth and a chip on every shoulder” might work. Basically, though, it’d be too small a gig for the Kinkster. I have bigger fish to fry.

Well, what about governor of Texas? That might be therapeutic, I figured. It’s a notoriously easy gig, and I’d certainly be the most colorful candidate to run for the office since Pappy O’Daniel. Hell, compared with Tony Sanchez, I’m practically Mr. Charismo. I can work a room better than anyone since the late John Tower went to that great caucus in the sky. When I meet a potential voter, I’m good for precisely three minutes of superficial charm. If I stay for five minutes, I can almost see the pity in the person’s eyes.

Nevertheless, being governor might be a lot of fun. I’ve known the last two and a half governors, and they didn’t seem to be working all that hard. Of course, I saw them mostly at social events. In fact, I once mistook Rick Perry for a wine steward at the Governor’s Mansion. I said, “Hey, you look familiar. Do I know you?” And he said, “Yeah. I’m the governor, Rick Perry.” Then he gave me a friendly handshake and looked at me like he was trying to establish eye contact with a unicorn. He didn’t seem as funny as Ann Richards or George W., but he came off like a pretty nice guy—for an Aggie.

After some minor soul-searching, I decided to throw my ten-gallon yarmulke in the ring and form an exploratory committee headed by the dead Dutch explorer Sir Wilhelm Rumphumper. The committee had one meeting and came back with the consensus that, as long as Willie Nelson or Pat Green didn’t decide to run, I could be the next governor. They offered the opinion that many of Pat’s people were probably too young to vote and that Willie, God bless him, did not quite present as clean-cut an image as I did. Also, neither of them had had any previous experience in politics. Not only had I run for J.P., but I’d also been chairman of the Gay Texans for Phil Gramm committee.

Though the report was encouraging, I had to admit that I was beginning to find the prospect of the governorship rather limiting. I aspired to inspire before I expired. There had to be something I could do for my country besides flying five American flags from my pickup truck and telling the guy with four American flags on his pickup truck, “Go back to Afghanistan, you communist bastard!” But what of the president’s offer? To clear the boards for my race for governor, I asked my old Austin High pal Billy Gammon to check the status of my appointment. Billy’s so close to the president he gets to fly in the White House helicopter. “I stand ready to serve!” I told Billy.

And he did. He told me that while the Bushes obviously considered the Kinkster a dear friend, the president had only been engaging in light banter when he’d raised the possibility of my moving into public housing. Billy also said that though I might have made a “fantastic contribution to government,” George W. could see how I might well have been a “scandal waiting to happen.”

“That’s good news,” I told Billy, “because I’m running for governor and I’d like you to be my campaign manager.”

I got over my disappointment quickly. Like most of us, I determined that I’d rather be a large part of the problem than a small part of the solution. Besides, I’ve got Big Mo on my side. I’m not sure how traveling with a large homosexual will go down with the voters, but hell, I’ll try anything. Just this morning, for instance, I tried making a campaign pitch to my fellow passengers on a crowded elevator. After several of them threatened to call 911, however, it unfortunately put me a little off-message. “Now that I have you people all together,” I told them, “I can’t remember what I wanted you for.”