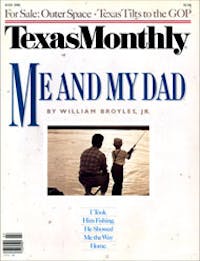 FOOD HAS PLAYED prominent role in some of history’s most momentous upheavals — mention tea and the American Revolution comes to mind. Or cake: Marie Antoinette’s snide directive, “Let them eat cake,” symbolizes the issue around which the French Revolution swirled. It may not be going too far to say that EatZi’s—a Dallas deli/grocery/restaurant referred to by the management as “EatZi’s concept”—has generated a revolution in food service that will have far-reaching repercussions. To give you an idea of the impact this rambunctious, 8000-square-foot establishment has had on Dallas, just listen to what one customer said: “I’ve been here at least once a day for a month!” Most people don’t even go to their jobs that often.

OK: here’s what separates EatZi’s from other grocery stores—it’s really a restaurant. And don’t let the fact that there are only a dozen or so tables and two narrow counters on which to dine fool you either. EatZi’s was created by restaurant genius Phil Romano and it is definitely in the business of serving food to its customers. In fact, “Food for the Taking” is their slogan. Although it’s not that big, EatZi’s has everything you could ever want for dinner, and management goes to great lengths to suggest that the possibilities are endless. And—there’s opera music (no German or English operas, they insist) merrily blaring away on the sound system.

Chefs in their tall white hats welcome customers outside; inside they hand out free samples of cheese, seafood salad, smoked salmon, and more in the “executional areas” where bread is baked and food to go is prepared. There are 140 produce items, EatZi’s ripens its own apples, and a third of EatZi’s own produce goes to making the prepared food. The food bins are even custom-made, and everything but everything is for sale, even the baskets and totes. There are 700 specialty foods—oils, dressings, soy sauce, infused mayonnaise, roasted garlic, and even onion jam. In this world of plenty, the aisles have been made purposely narrow to create an intense atmosphere that’s made even more intense because the chefs are constantly coming out from behind their counters to talk to the customers about the food.

In truth, much of the food EatZi’s offers can be had at your local supermarket. But you won’t feel as good shopping for it and you won’t have nearly as much fun. And, you’ll have to cook. Take-home offerings at EatZi’s can be amazingly good, particularly because you know that most of the preparation has already been done for you. The focaccia topped with tomatoes and caramelized onions redolent with garlic has gotten raves as the best in town; pizza also gets top honors. Thuringer salami is spectacular. A basic like roasted chicken shows thoughtfulness in the preparation—even with crisply browned skin, the meat is still tender and succulent. If you live in Dallas you have likely been to EatZi’s or are planning to go; out-of-towners can easily add it to their list of compelling tourist attractions. But if you don’t want to join the masses just yet, wait a while—the EatZi’s concept management team has plans to roll out EatZi’s all over the country. Probably even in your own home town.

Try EatZi’s Rosemary Chicken with Jicama Slaw at home or for a summer picnic.