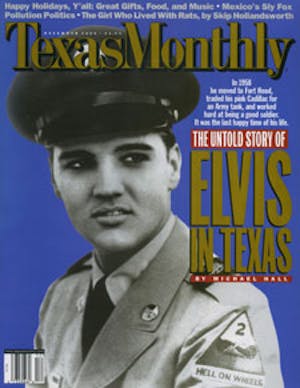 Texas was Elvis‘ home away from home in the early days of his career, a direct result of getting on the “Louisiana Hayride.” He signed a contract in late 1954 with the popular radio show, which was broadcast live every Saturday night from 50,000-watt KWKH radio in Shreveport. (CBS syndicated a half hour of the show every week to 190 stations throughout the South.) Elvis began playing on “Hayride” packages that did short tours out of Shreveport, most of which went into the state next door.

In 1955 Elvis, guitarist Scotty Moore, and bassist Bill Black played more than eighty dates in Texas (their own and package tours) in 44 towns and cities, from Houston and Dallas to Carthage (a mill opening), Alpine (a high school auditorium show that benefited the Future Farmers of America), and Gonzalez (a baseball park). Performances were short (twenty to thirty minutes) and frantic. On July 4 they played an early-afternoon gig in DeLeon, then drove to Stephenville for another, and wound up in Brownwood that evening. “It was always exciting,” Elvis said later. “We slept in the back of the car, and we’d do a show and get offstage and get in the car and drive to the next town and sometimes just get there in time to wash up [and] do the show.”

The earliest known radio broadcast recording of Elvis took place in front of 150 people at Eagle’s Hall in Houston, on March 19, 1955. Elvis is loud, sometimes distorting the mike, but Scotty and Bill are clearly heard. Elvis, introduced as the “bopping hillbilly,” sings, “Well, well, well, well, well, well, woah. Well, I heard the news. There’s good rockin’ tonight! All right, rock, man, rock!” Girls are already screaming. By the end of the third song, “Blue Moon of Kentucky,” they’re louder. After the song Elvis says, “Thank you very much, ladies and gentlemen. I’d like to do a little song right here that I hope you people like. This one’s called, ‘Little Darlin’, you broke my heart when you went away, but I’ll break your jaw when you come back.’” By the time he does his hit, “That’s All Right,” the girls are out of control.

Elvis was first most popular in West Texas—in San Angelo, Midland-Odessa, Lubbock, and Amarillo. Roy Orbison saw Elvis in Odessa on February 16, 1955. Later he said about the experience, “His energy was incredible, his instinct was just amazing … I just didn’t know what to make of it. There was just no reference point in the culture to compare it.”

Buddy Holly opened for Elvis twice in Lubbock in 1955. Jimmy Rodgers Snow, Hank’s son, opened for Elvis in Lubbock on February 13, 1955. He remembers how Elvis came out wearing “a chartreuse jacket and black pants with a white stripe down the side, and the kids were just going wild… . I remember how cool he was in my mind. I wanted to sing like him. I wanted to dress like him and do things that I never cared about till I met him. He was the change that was coming to America.”

The first-known Elvis performance to be filmed took place at an August 7, 1955, afternoon show at Magnolia Gardens in Sheldon, just east of Houston. Jim and Lois Robertson had come to see headliner Floyd Tillman, but for some reason she could never understand, Lois began filming the twenty-year-old light-blue-shirted Elvis from about eight feet away with her new 8mm wind-up camera. Elvis in Kodachrome is a moment in time—a shy kid walking onstage, hands in pockets, head down. Then Bill Black hands Elvis his guitar, and he’s singing and banging on it, his left leg wiggling so much that at one point he steps back and hoists his pants up, then smiles his soon-to-be millionaire smile. Confidential magazine reported that in 1956 Elvis had been engaged in a “frenzy” of signing women’s breasts after playing shows in Lubbock. Some “dollies,” the rag reported, put bandages over the autographs so they wouldn’t wash off in the shower. “When these gals wore peekaboo blouses, it looked for months like an epidemic had hit town.”

Rock and roll shows were banned in Corpus Christi after Elvis played there at the Memorial Coliseum on April 16, 1956, to six thousand fans. According to venue manager Tom Davis, the show was “a contributing factor in juvenile delinquency.”

On October 11, 1956, Elvis played the Cotton Bowl to a crowd of 26,500, the biggest in Dallas history to see an entertainer. The band was driven into the stadium in the back of an open Cadillac to sustained screaming. Even as they played, at the fifty-yard line, the musicians couldn’t hear anything but the noise of the crowd. “It looked like a war out there,” said drummer D. J. Fontana.