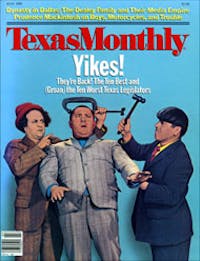 I married a Pepper. Late one night while my was draining a six-pack, I asked what she found so compelling about the mixture of carbonated water, corn syrup, and 23 secret ingredients that make up Dr Pepper. She stared at me as though I’d asked why she bothered to breathe. “It’s local,” she explained simply. “And it’s nice on ice cream.” On such a blend of tradition and idiosyncrasy has America’s fifth-favorite soft drink built its effervescent empire.

These are tough times in the soda business. There are now more soft-drink brands than you can shake a recyclable can at, the health-food craze has cooled the public’s craving for sugar water, and the big guys, Coke and Pepsi, are waging an expensive battle for control of a soda-drinking universe that has no place for little guys.

Yet plucky Dr Pepper has more than held its own. In its one-hundredth year, the Dallas- based soda company has bounced back from a period when it’s fizz fizzled. Today it appeals to the eccentric in all of us. Even its commercials (“Hooooold out! For the out of the or-di-nary”) are inspiringly offbeat.

Dr Pepper lovers are passionate about their soda. The Baylor bear won’t touch anything else. Neither will the Pepper pig in Beulah. Even human Dr Pepper drinkers are fiercely loyal. The citizens of Waco, birthplace of the beverage, annually down an average of 250 cans of the stuff apiece.

Seeking to understand that extravagant ardor, I visited Dr Pepper’s headquarters on Mockingbird Lane in Dallas. Here the entire world’s supply of Dr Pepper’s secret fruit-flavoring compound is made.

“Care for a Dr Pepper?” asks a receptionist. “Regular or sugar free? Hot or cold?” The Dr Pepper building is a place where even the casual visitor must make choices. It is part of the ethic of the company. You can make a commitment and choose Dr Pepper, or you can drink just anything. The receptionist offers recipes for dishes whose flavors can be perfected only with a dash of Dr Pepper: barbeque rubs, pancakes, cheese ball with dried beef, even avocado dip!

This is clearly Pepperland; everywhere cheerful, neatly dressed people work with personal supplies of Dr Pepper close at hand, like the faithful keeping the Scriptures by their side. My tour beings at a replica of Morrison’s Old Corner Drug Store, where Dr Pepper was born in 1885. (The original has been razed; its Waco site is now a parking lot.) A blend or fruit flavors, sugar, and soda water, the drink was created by the young soda jerk Charles Alderton. The name care from the pharmacy’s owner, Wade Morrison, who was pining away for a lost love in Virginia, the daughter of one Dr. Charles Pepper. Morrison hoped to impress the girl’s father by naming Alderton’s concoction for him. Alas, the story does not end perfectly; Morrison finally married a girl from Round Rock.

We move to the testing room, where a young man in a white lab coat describes the indignities to which he subjects random samples of soda, all in the name of quality control. Bottles are measured, placed in an ultrasonic shaker, sterilized on a Bunsen burner, bled for a drop to undergo microbiological scrutiny, and, of course, tasted. “After the one-hundred-fiftieth one,” the lab man confides, “you taste them all and say, Yuck.”

Next stop is the skylit office of John Albers, Dr Pepper’s fourth president in four years. The turmoil at the top is a recent phenomenon. After moving to Dallas in 1923, Dr Pepper enjoyed fairly constant success among thirsty Southerners. Then it went national, and by 1980 it had passed 7-Up to become the country’s number three soft drink, behind only Coke and Pepsi.

Many people blame the fall that followed on ambitious president Charles Jarvie, who served from 1980 to 1982. Jarvie bought new bottling plants, acquired others, and purchased Canada Dry for $143 million. He dreamed that Dr Pepper could go cano a cano with the big guys. Playing away from his company’s strength (a loyal following that cared most about taste), Jarvie tried to sell to the masses by matching supermarket price discounts with Coke and Pepsi.

It was a disaster. In 1982 Dr Pepper had its first red-ink quarter in 27 years. When sales figures showed the company had again slipped behind 7-Up, Jarvie was out of a job. Since then Dr Pepper has been sold to a New York investment firm, gone private in a $647 million leveraged buyout, spun off a string of bottling plants, and sold Canada Dry.

The cheerful, loquacious Albers, promoted into the hot seat last year, has led a strategic about-face. He is emphasizing single-drink sales in vending machines and convenience stores, where all soft drinks are priced the same and his soda can compete on taste instead of price. Once again Dr Pepper is seeking a niche rather than a mass market. As his marketing pitch suggests, Albers is after the soda drinkers who are proud of being different. He calls them the inner-directed- “people who make up their own mind, who would not feel out of place if they were the only on in the room drinking a Dr Pepper.”

It seems to be working. Profits and sales were way up in 1984. Diet Coke has become the number three seller, pushing Dr Pepper to five, but Albers predicts that his drink will be back up in front of 7-Up before the year is out. “No lemon-lime will ever surpass us again,” he declares. “You’ll have the colas, and you’ll have Dr Pepper.”

The final stop on my tour is the very soul of the Dr Pepper Company, the secured section of the building where the magic compound is made. There I meet Charlie Grier, a soft-spoken 54-year-old fellow with a round face and round glasses, who looks like your friendly neighborhood pharmacist. In the batching area, thick with the scent of fresh fruit, flavor guru Grier presides over the blending of the secret ingredients.

Once a week Grier and a single deputy enter a special refrigerated area, lock themselves behind a double steel door, and prepare the flavor mixture needed for all the Dr Pepper in the world. It is called Compound J. One gallon of the hyperconcentrated mixture is enough for all the Dr Pepper drunk in the Dallas- Fort Worth area in a day. Contrary to rumor, says Grier, the soda does not contain prune juice.

The only two copies of the formula that exist are kept outside the Dr Pepper building, in the vaults of two separate Dallas banks, to safeguard against a disaster that might destroy one and not the other. (Lightning? A very small earthquake?) Even Grier makes a point of not memorizing the formula. “You try not to commit anything to memory,” he says mysteriously, “because you never know what situation you might be confronted with.” Out of the ordinary indeed.