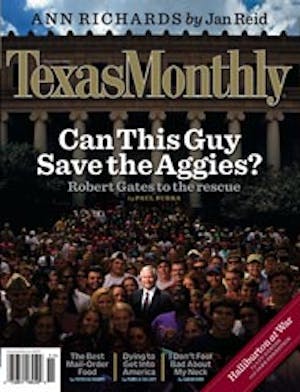 Every year, starting on the first Saturday in November, half a million hunters take to the state’s hills and hollows in pursuit of white-tailed deer. Over the next three months, these sportsmen log more than 4.1 million man-days afield, shell out more than $130 million, and kill more than 450,000 of their prey.

(Top of the page)
Chipper Dippel (kneeling) guides ten hunts a year at Whispering Water Ranch and Resort, in Menard, which is home to two hundred whitetails. Here he guides for Steve Saunders, an oil field pipe salesman from Midland.

(Above left)
“I get five to six hundred deer over the season,” says taxidermist Martin Binnion, of Binnion’s Taxidermy Studio, in Devine. “And we just work on that number till we knock it down.”

(Above right)
This eleven-point buck weighed 132 pounds field dressed. He was harvested with a single shot from a .300 Weatherby at 130 yards.

(Above)
Thirteen-year-old Zed Woerner, of Marble Falls, started hunting with a rifle at the age of seven and a bow at the age of ten. He is still waiting for his first kill with a bow.

(Above left)
At the Ranch House Meat Company, in Menard, processors like Benjamin Rendon remove the hooves, hides, and heads; hang the animals until they finish bleeding (about two days); and then slice the meat. On busy weekends, the chop house handles about eighty deer per day.

(Above right)
During a rut, or breeding season, bucks throw caution to the wind and roam about the woods in search of mates, stopping periodically to scrape territorial markings on tree trunks with their horns. This buck rub was made on the Whispering Water Ranch during last season’s prime rut.

(Above)
On the High Lonesome Ranch, in McMullen County, this buck was known as El Guapo for his impressive antlers. He was taken two seasons ago by Arthur Kohler, a retired schoolteacher from Atascosa.