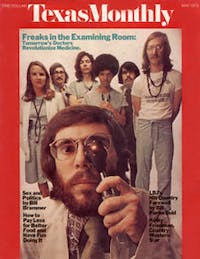 SO YOU HAVE YOUR OPERA tickets, what next? If you don’t, it may not be too late. See below. The Metropolitan Opera performs in Dallas in the State Fair Music Hall, in Fair Park. Football devotees will know it as the large auditorium near the Cotton Bowl. Fair Park is easily reached, on plainly marked exits from I.H. 20 (R. L. Thornton Freeway).

Parking inside the Park is free to opera-goers, except that the nearest lot is reserved for Patrons of the Dallas Grand Opera Association. Be a little early to insure a convenient parking place, and to be sure you won’t be late to the opera. No one is seated after the lights go down.

What to wear to the opera? Almost anything from formal evening wear, to street dresses, to pants suits. Formal dress is seen less and less as time goes by, but if you have a gown you want to show off, it’s still all right. Business suits are fine for men. Whatever you wear, you can expect to be stared at. That’s the chief occupation of almost everyone (after a glance at the program) while waiting for the opera to begin. And ladies, even Bella Abzug should leave her hat at home when she goes to the opera.

The Music Hall has been completely renovated since the last Metropolitan Opera Spring Tour season in Dallas, two years ago. It is now resplendent and exceptionally comfortable. Even the armrests are padded. There is a bar and a long row of telephones for anyone who gets a little too much opera for one sitting.

What to do before and after the opera? See “Around the State” in this magazine for information on restaurants, museums, etc. Right in Fair Park you will find the Dallas Museum of Fine Arts, the Aquarium, the Health and Science Museum and Planetarium, and the Museum of Natural History. There are restaurants there too; come early and make a day of it. If all else fails, you can always sit on the benches and watch the ducks on the pond next to the Fine Arts Museum.

If you really came to Dallas because you like good music, and have an FM radio in your car, tune in WRR-FM (101.1) as soon as you are in FM range of Dallas, for twenty hours a day of excellent classical music programming.

If you still haven’t gotten your opera tickets, it’s probably not too late. There are no really bad seats in the auditorium, except perhaps the very cheapest, which are somewhat remote from the stage. Order them from State Fair Box Office, P. 0. Box 895, Dallas, Tx. 75221.

If you really want to be prepared for the operas of your choice, don’t miss any opportunity to hear or read about them. Doing your homework will greatly increase your pleasure in the performances. Even if you don’t know a hawk from a handsaw about opera, you will find these operas a delight—chock-a-block with grand tunes a tone-deaf organgrinder would relish.

You will like the operas even better, however, if they are somewhat familiar. Going to the opera with no notion of what is going on on the stage is reducing opera to a mere concert in costume, and you will miss half the fun. At the very least, go to your public library and read the stories of the operas. Kobbé’s Complete Book of the Opera or The New Milton Cross’ Complete Stories of the Great Operas will do. Ernest Newman’s Stories of the Great Operas is better still for those with some knowledge of music. (It has on piece on Macbeth.)

Whatever you do don’t wait till the last minute to read the story of the opera. Looking at a libretto or program by pocket flashlight or cigarette lighter after the lights dim will only confuse you and annoy your neighbors! There is a painless (and free) way of preparing for the opera if you live within range of WRR-FM. They always play recordings of operas coming to Dallas on Sunday evenings at 8.

Good recordings of the operas are available in abundance. Of Carmen there are two recordings of the Opéra-Comique version with spoken dialogue to be used by the Met. One has the Metropolitan cast (see below) conducted by Leonard Bernstein, and is due to be released in April. The other is Angel’s version with Grace Bumbry and Jon Vickers. Other recordings with the familiar sung recitatives feature Price, Callas, and De los Angeles. If you have any respect for the French language, avoid the version with Price and Corelli. Corelli slaughters the French text.

There are three appealing recordings of Macbeth, with Nilsson, Rysanek, and Souliotis as Lady Macbeth. There are several good recordings of Tosca. One is an outstanding bargain, with Milanov, Bjoerling, and Warren, on Victor’s VICS—600, an all-star recording in stereo on sale at budget prices. There are also many versions of Il Trovatore, probably the best of them being the Price, Tucker, Warren recording on RCA Victor.

Carmen has been called “the most popular opera in the world,” but it turns out that after all these years we have been hearing a lot of music that wasn’t composed by Bizet at all. As it originally appeared in 1875 at the Opéra-Comique in Paris, it was provided with spoken dialogue, according to the traditions of that theater. However, Carmen in this version was rather a stiff drink to the “family” audiences in Paris. It was soon changed into a grand opera for Vienna by providing it with sung recitatives by Ernest Guiraud, using different and somewhat milder words.

This is the grand opera version which gained popularity outside France and to which we are accustomed. It should be exciting to hear it the way Bizet composed it, in the Metropolitan’s new production as conceived by Goeran Gentele. It is perhaps unfortunate that this new production with spoken dialogue wasn’t done in English. The dramatic possibilities are fascinating.

Carmen in Dallas will have the rich-voiced Marilyn Home as Carmen, and the dramatic tenor James McCracken as Don José, with Adriana Maliponte as Micaëla and John Reardon as Escamillo. The conductor is Henry Lewis.

Macbeth marked Verdi’s earliest attempt to realize a Shakespearean play on the Italian opera stage. (Otello and Falstaff were works of his old age.) Macbeth is an enjoyable offering, if you are not too devoted to Shakespeare to stand references to “Macbetto” and “Macduffo.” The scenes with the witches are a bit weak, probably from the lack of an element of humor. The light touch of wit which makes Purcell’s witches in Dido and Aeneas so delightful when properly represented is lacking. Macbeth may not be the best opera for a beginner, but it is a treasure for the slightly sated operagoer, and should not be neglected.

Macbeth is to be conducted by Francesco Molinari-Pradelli and will feature Grace Bumbry as Lady Macbeth and Sherrill Milnes as Macbeth. The Banquo is the estimable Ruggero Raimondi, who was seen in Donizetti’s La Favorita with the Dallas Civic Opera last fall. Franco Corelli should be more at home as Macduff.

Puccini’s Tosca is based on a late ninteenth-century “semi-historical melodrama” by Victorien Sardou, that master of highly effective but somewhat empty stage artifices. This lack of characterization is counteracted by the warm musical characterizations added by Puccini. All three major characters, Mario Cavaradossi, Floria Tosca, and Baron Scarpia are famous for their marvelous portrayals by many effective singing-actors. As for stage-effects, Tosca has everything: a torture scene heard offstage, Tosca’s knifing of the bigot-satyr Scarpia, an execution by firing squad, and a suicide by leaping from the parapet of the Castel Sant’ Angelo. What more could you ask?

Tosca is to be sung by Elinor Ross, who is new at the Metropolitan. She may be known to a Texas audience from appearances with the San Antonio and Houston symphony orchestras in 1963-1964. Sandor Konya should be a reliable Cavaradossi. Tito Gobbi is one of the great Scarpia’s of all time. Fernando Corena is right at home as the Sacristan. Both Tosca and Il Trovatore will be conducted by Carlo Felice Cillario.

Despite a tremendously complicated plot (much of which has happened before the opera begins) and cardboard cut-out characters, Verdi’s Il Trovatore is an unusually vivid and exciting opera, with an overflow of lush Romantic melodies. You may be tired of the Anvil Chorus, but it is only a small part of the whole opera.

Leonora in Trovatore is to be sung by Hana Janku, another soprano new to the Metropolitan. Her previous career has been in Italy and Germany. The Manrico is Richard Tucker, a veteran of more than twenty-five years at the Met. He is probably the most like Caruso in style and timbre (and even in vocal faults) of any of the many tenors with whom Caruso has been compared. Another old favorite of the Met is Robert Merrill as Count di Luna. James Morris as Ferrando and Irene Dalis as Azucena complete the cast of principals.

All in all, this Metropolitan season at Dallas should be a feast to the eye and the ear. Combining as it does the familiar and the unfamiliar, there is something for everyone.