Some news stories seem like they can only happen in Texas. Such is the case of the Quinlan man who chose his pet buffalo to be his best man (er, best bison?) at his wedding vow renewal ceremony.

Wildthing, a 2,100-pound, house-trained buffalo, is the beloved pet of Ronald and Sherron Bridges. Wildthing has free range of the family’s house, wandering in and out as he chooses, and even has his own room. (Curious what day-to-day life with a buffalo looks like? See this slideshow.)

How’d the beast do as best man? He was excellent. “Well, he just sat up there lookin’ all nice and pretty. And he held the rings and when he got tired of holdin’ ’em, he slung ’em off,” Sherron told 20/20‘s John Berman.

Lucy Lang of the Daily Mail caught up with the Bridges recently for a piece for the British website. “When he was tame we decided that he really deserved a room in our house where he could come in and eat and sleep if he wanted. People think we are mad having a nearly full grown buffalo in our house, but we are used to it,” Sherron Bridges explained to Lang.

When Wildthing was just a tiny calf, Ronald used a halter to tame and train him.In 2008, when Wildthing was two years old and 1,400 pounds, a reporter from the Corsicana Daily Sun chronicled their relationship. “We have to always watch him,” Ronald Bridges told the paper. “He would never do anything to hurt me, but he sometimes does not like other people.”

20/20‘s Berman, who dropped by the family’s home in 2010 to film a segment on Wildthing, seemed wary as the buffalo clomped around the house. Ronald did his best to reassure him that Wildthing acts tame when he’s indoors. Well, mostly: “One time he picked up a couch and moved it, but I told my wife she probably had it in the wrong place anyway,” Ronald joked. 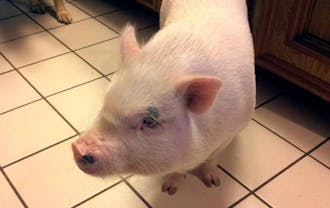 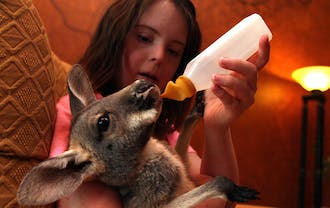