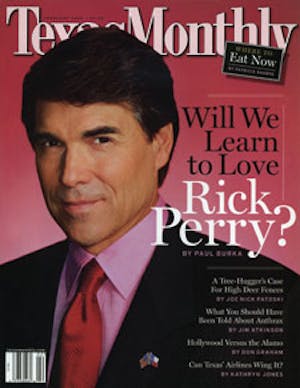 texasmonthly.com: What did you have in mind conceptually for this piece when you first heard about it? Why?

Scott Dadich: Evan Smith came to me early in December with an idea for a story about Rick Perry, written by Paul Burka, that would address issues of his relevancy, his place in Texas politics, and his ability to control his own political fate in his upcoming bid for reelection in a year of tremendous political upheaval. In concert with that story, Paul would address all of the major statewide races—from attorney general to the race to fill the U.S. Senate seat being given up by Phil Gramm. I seized the occasion to shoot a comprehensive portfolio of the leading candidates, including the governor, as a piece. We based the package on the theory that given a static environment, a series of similarly composed portraits could elucidate much about the personalities of the subjects. And since this story is essentially about the making of the new Texas political landscape, why not show the making of the portfolio—the process and method behind the portraits would be revealed through the photographs themselves. So we built a ten-foot shooting wall in a downtown Austin studio and invited the candidates to have their photograph made.

texasmonthly.com: Did the concept change once you got to the shoot? Why or why not?

SD: What became clear to Dan Winters and me early in the shoot was that our idea was coming together as we had planned. A narrative started to emerge. Kirk Watson (page 79) just lit up as soon as he got in front of the camera. So why don’t we move in and get a nice close-up of his beaming smile? And wouldn’t it be interesting to photograph John Cornyn in the same manner (page 80) in order to contrast the difference in personalities? So we did. And we varied the pacing and emphasis as we went along—to take the reader on a trip to our set—showing all sides and perimeters of it. And that’s why you can see the work lights, the fan, and the fire extinguisher. We just let things happen, and I think the result is quite amazing. The studied determination and concentration on Tony Sanchez’s face becomes very revealing, so too does Susan Combs’ honest and casual smile as much as Carole Keeton Rylander’s hearty laugh.

texasmonthly.com: Why did you decide to use Dan Winters as the photographer?

SD: To put it bluntly, Dan doesn’t normally shoot politicians. He is one of the most highly regarded portrait photographers in the world and of late, has typically photographed celebrities and well-known personalities. I knew it would be an unusual but intriguing fit to put his eye to subjects that aren’t normally given artful consideration.

texasmonthly.com: Is Dan easy to work with? What are some of his better-known traits?

SD: Dan is wonderful to work with. In my estimation, his best quality is his enthusiasm. He shares the same zeal that I do for making great art—so often he and I are on the same plane, we don’t even have to explain ourselves to each other. He’s incredibly receptive to new ideas and loves to brainstorm and try new things. Many times during this shoot, when one of us would be struck with an idea and it would work out, he’d exclaim, “Awesome!” or “Yeah!” at the top of his voice. Everyone on the set was great to work with and that can only happen when the right tone is struck by the photographer.

texasmonthly.com: Were there any memorable moments during the shoot?

SD: We shot over two days just before Christmas. Since we had eleven portraits to shoot, the schedule was fairly tight and fast-paced. It only allowed us about thirty minutes per person with set breaks and camera moves planned between portraits. Basically, not a lot of time to get to know the candidates. But some made their personality felt with little exploration on my part. Governor Rick Perry was one of those people. He came in just after lunch and was in a lively, good mood. But it was hard to get him to focus on the photo shoot. He was more interested in picking up a game of darts with our second photo assistant than getting made up for his portrait for the cover.

texasmonthly.com: What image were you trying to convey with the cover shot of Governor Rick Perry?

SD: We wanted to create an image that expressed the cover line: “Will We Learn to Love Rick Perry?” We explored love—the thematic centerpiece of the image—in the context of Valentine’s Day and the visual connotations that the day carries. The cover image conveys attitude and fun while addressing a serious question.

texasmonthly.com: How did the governor feel about wearing pink?

SD: He was less than thrilled with the notion, but after chatting with him for a bit and after informing him the clothes were from Neiman Marcus, he felt more at ease.

texasmonthly.com: Where did his boots come from?

SD: He had them custom-made. They were brand-new at the photo shoot, and he was very proud of them. Dan caught a glimpse of the flag on the front of them as Perry walked around. Dan turned to the governor and me and said, “Don’t think we’re not going to shoot those!”

texasmonthly.com: Why is Tony Sanchez on the phone? What was he talking about?

SD: Tony was one of two candidates who came alone—no handlers, assistants, or publicists. He was on his own when his cell phone rang in the middle of shooting. He apologized and said he had to take the call because it was official campaign business. Life on the campaign trail made a great photograph.

texasmonthly.com: What is Carole Keeton Rylander laughing about?

SD: Carole didn’t stop laughing the entire time she was with us. She was self-deprecating and made jokes about everything from her stature to her second Bum Steer award in our January issue (which, by the way, she has a great sense of humor about).

texasmonthly.com: Once you get a series of images for each subject, how do you determine which photos to use?

SD: A day or so after we had the film processed, Dan and I went to breakfast and laid all of the contact sheets out on the table. I brought my notes and sketches and Polaroids, and we went to work. I knew we had twelve pages to work with, and we had to combine what we wanted to portray artistically with what the editorial vision required. But sequences had clear-cut choices, and once those came to the top, it was easy to fill in the holes with the right photos. We just had to keep the bigger picture in mind: the pacing, the emphasis, and the voice of the magazine.