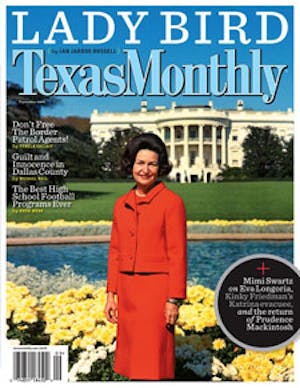 It’s a safe bet that most back-to-school essays on the theme “What I Did on My Summer Vacation” will be short on details about the beach and long on complaints about the rain. To anyone who has lived through the kind of relentless, triple-digit scorcher that tests the resolve of even the most seasoned Texans, this has hardly felt like a summer at all.

By the first week of July, some areas of the state had received as many as 44 consecutive days of rain (it was the wettest July on record since 1903). And it kept on raining. Tubing trips were called off, fireworks shows fizzled out, barbecues were ruined. As flash floods overwhelmed rural communities and farmers struggled to save their waterlogged crops, state officials called the monsoon catastrophic. So many crickets descended on the University of Texas at Austin that the school darkened the Tower at night in hopes of deterring them. And though the rain has since abated, the trouble isn’t over yet: Mosquitoes are thriving, and not since 1957 have the state’s river basins all been at flood capacity. Still, despite the grumbling about the weather, the deluge has brought us benefits too. It’s been a mild summer— so mild, in fact, that you might even remember it wistfully the next time the temperature breaks 100 degrees for a week on end. Most important, the rain has solved one of our biggest crises: For the first time in at least a decade, Texas is officially drought-free. Now, that’s something to be grateful for.