Where it is: 10 miles north of Denton
What you’ll do: Biking, horseback riding, and kayak­ing, but don’t forget to stop and watch the sunset
Where you’ll sleep: Camp near the water’s edge, which is close to numerous sites in Quail Run
What you’ll learn: How to speak mountain-biker, as in “Let’s hammer up a grinder and find nirvana, but be sure to wear your brain-bucket in case of a face plant”

Ray Roberts Lake State Park, in the Cross Timbers between Sanger and Pilot Point, is only a few miles from the spreading suburbs, which now encroach as far north as U.S. 380. As such, it’s the closest, prettiest place to escape from the Metroplex. At the Isle du Bois unit, on the eastern side of the lake, you can camp a few yards from the water’s edge and still enjoy the shelter of the taller trees that crowd the shore. Behind you, tangled patches of oak, cedar, locust, dogwood, and redbud—the last two flowering when I visited—cover the hilly peninsula that is the prominent feature of the park. Areas of tallgrass prairie, a mass of deep yellows and browns, add yet more tones to the park’s palette.

This is horse country, and Isle du Bois gives equestrians their own camping area, called Bluestem Grove, and several miles of riding paths. (Unfortunately the horse-riding track of the Greenbelt Trail is closed indefinitely.) Hikers and cyclists get to enjoy ten miles of gravel footpath that shadow the river through shady elm and cottonwood bottomlands. Back in the park I found the paved scenic trail fun, but serious two-wheeled thrill-seekers will want to try out the eleven miles of track that volunteers from the Dallas Off-Road Bicycle Association built in the park. Steep and rocky, these trails are not for beginners, though if you make it up onto the peninsula’s center ridge, you’ll enjoy a great view of the lake through the trees.

Don’t forget your kayak, either. Naturally the lake is great for windsurfing and powerboating, but you should also paddle the Elm Fork through the Greenbelt. Another access point—roughly halfway, at FM 428—allows for shorter trips. North Texans are fortunate to have such a conveniently located center of so many activities, though the park’s main charm is the beauty of this little slice of the woodland belt that divides the Great Plains from the eastern forests. One recent evening I watched an orange sun sink over the lake until all I could see was a cell phone tower twinkling on the other shore. From the hillside a coyote howled, as if to remind the sleeping metropolis what it was missing.

TRIP TO TOWN: Look to the park’s Lantana Lodge (lantanaresortmarina.com) for more-luxurious accommodations. Riders can stable their horses in the lodge’s stalls while enjoy­ing lunch or dinner on the terrace at the Bronze Buffalo Grill. 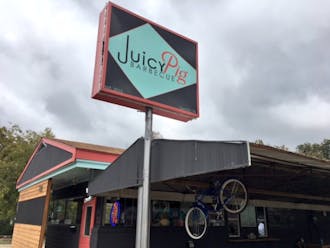