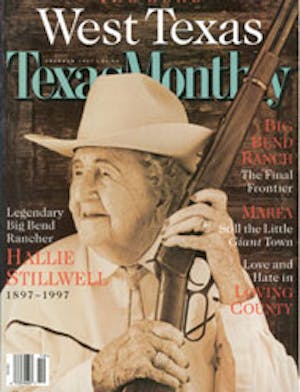 Their mission is to save the world, not conquer it, but the stars of Xena: Warrior Princess are winning television-ratings battles from San Angelo to Slovakia. The two-year-old syndicated show airs in more than eighty countries, making Lucy Lawless, who plays Xena, the first leather-clad TV lead since the Fonz—and making Katy native Reneé O’Connor, who plays Xena’s feisty ingenue, Gabrielle, the most famous tagalong since Dick Grayson began shadowing Bruce Wayne. In the tradition of great sidekicks, well-meaning Gabrielle makes Xena work harder by getting kidnapped or finding trouble in nearly every episode. “No one liked the character when she was introduced,” the 26-year-old O’Connor says. “Fans went online and referred to me as ‘that irritating blond.’” But now her fan club—run by her mother, Austinite Sandra Wilson—is thousands strong. Throngs of well-wishers greeted her in April, for instance, when she flew from New Zealand (where the show is filmed) to Austin for a party at Threadgill’s, the comfort-food mecca owned by her stepfather, Eddie Wilson. “It just feels like home here,” she says.