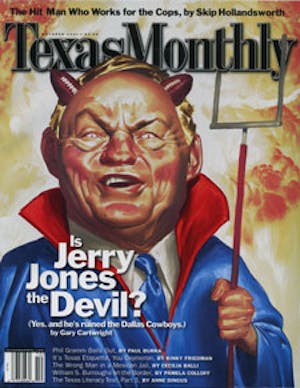 On October 14 Richard Linklater’s eighth movie, Waking Life, will have its regional premiere at the Austin Film Festival—ten years after his first feature film, Slacker, became a landmark of independent cinema. Using a team of animators and innovative software called “interpolated rotoscoping” to create a hallucinogenic, moving painting based on live-action footage, Waking Life represents both a stylistic departure and a thematic homecoming for the 41-year-old Texan auteur.

Was there a reason you went back to a nonlinear narrative, similar to Slacker’s, after your more linear stories like The Newton Boys and Before Sunrise ? I think all my movies have narratives, it just depends on how you define “narrative.” There’s the über Hollywood narrative, which is so simple it begs for a new term. My whole approach to films has always been to ask the question, What is narrative? What qualifies as a story? You know, if we put a camera on a tree for an hour and a half and just watch, we impose a narrative. A leaf falls, a truck drives by, a deer crosses the plain. We compose stories around what we’re seeing. In Waking Life I was trying to capture the narrative of our lives, or our psychic state.

Why turn to animation for a film that’s so concerned with real human moments? Well, the animated characters are more real than a lot of people. It’s the way your memory works—you animate things in your mind.

Why did you pick Wiley Wiggins [who played one of the leads in Linklater’s Dazed and Confused] to play the main character? I never questioned it. He was always the guy. He sort of floats through life with one foot in the real world—or maybe a couple of toes in the real world—and the rest of him sort of on this other plane of existence. He was the right seeker-traveler-type person. He’s an accepter.

How did you pitch this project? I just said, “It’s gonna be interesting.” You know, there wasn’t anybody going, “What’s the plot?” Everybody said, “Oh, it’s this cool, strange art project,” and everybody got on board. We didn’t have a script, per se, and we didn’t have a title or anything like that. I had, like, fifty pages of notes and ideas and dialogues and scenes. I was very confident that if nothing else, it would be an ambitious failure. That’s a good goal to have, I think—ambitious failure.