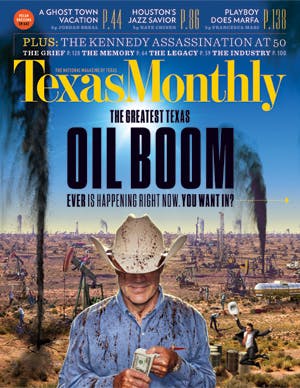 Our October issue included a timely profile of Richard Fisher, the engaging president and CEO of the Federal Reserve Bank of Dallas. Binyamin Appelbaum, of the New York Times, tweeted in praise of the piece, saying in part, “Most central bankers are boring. And then there’s Richard Fisher.” In early October, senior editor Erica Grieder sat down with her subject before a rapt and thoughtful audience of three hundred–plus at SMU. The discussion was expectedly high-minded but also decidedly breezy (Fisher’s nomination for Fed chair? Ashton Kutcher)—the exact sort of exchange we’ll be hosting more of in the coming months.

The profile of Greg Abbott in October’s issue is well-done, but surely there is no doubt how he would lead as governor [“The Overcomer”]. As attorney general, he has pursued a hard right-wing agenda. Why should we think that in a different office he would suddenly realize that Texas moderates and liberals also have the right to be heard by their officials?
Cooper Renner, Palmview

My fellow Texans, I’d like to introduce you to Rick Perry Jr. After reading the article on Greg Abbott, it feels as if we’ve already lived the next four years . . . or wait, was that the last decade-plus? We keep hearing the same tiresome message over and over: feds bad, Texas under siege, grab your guns, drop your wallets, run for cover as the brave boys spend our money on lawsuits to defend our honor or their right to get elected or something like that. For heaven’s sake, whatever happened to a politician with an original message?
Kate Amerson, Austin

I’d much rather see someone who is running for governor pose with a textbook. Greg Abbott’s priorities are pretty obvious.
L. J. Renyer, Blanco

Who designs your covers now, Wayne LaPierre? Didn’t it occur to you that in the wake of the massacres in Connecticut and the Washington Navy Yard, the last thing we wanted to see on your cover was some smirking right-wing political hack brandishing a gun?
Tom Walker, San Antonio

This picture alone will win Greg Abbott the election. So not fair.
Jon Pitt, via Facebook

A pair of pink sneakers is going to run all over that rifle!
JoAnn Brown Stringer, via Facebook

Nice to know TM feels it can assume a winner. Regardless of a front-runner, the media has a sacred duty to report and remain impartial to candidates during a democratic election. While some outlets are still somewhat slanted, this cover unabashedly makes an endorsement and a presumption. Shame on you, TM.
Alan Alexander Arismendez, via Facebook

Wow, you’re being somewhat fair for once by giving a Republican a cover. Game on!
Melissa Hovey, via Facebook

I had a coach who used cruelty and manipulation to control and motivate, and while it may be successful, it’s also destructive and comes at a cost to the athletes [“Failure Is Not an Option”]. Narcissism fuels single-minded confidence and ambition in both athletes and coaches and can be confused with success. This type of personality is often charming and persuasive (like a con man’s) but can be dangerous when given power over others. Athletes become nothing more than a means to an end. I don’t know Bev Kearney, but her side of the story as reported here did not inspire a lot of confidence.
Linda Wallace, via texasmonthly.com

Yes, every economist agrees that taxes and regulations, especially on productive enterprises, should be as low as possible [“Money Makes the World Go Round”].

But that has nothing to do with a monetary policy that should be stimulative when we see underutilized capacity, massive unemployment, and the PCE deflator (an index of inflation used by the Fed) shrinking toward one percent. The second quarter, by the way, actually posted deflation by this measure.

The United States seems to be sinking into the Japan model of sluggish growth and near deflation, or mild deflation. Only a central bank can counteract those trends. You can run fiscal deficits or balanced budgets and “it won’t matter none,” to speak Texan.

The right wing—including Richard Fisher—needs to reevaluate its encrusted and ossified shibboleths regarding monetary policy. Sometimes the answer is, in fact, “Print, baby, print.” Money, that is, and lots of it.
Benjamin Cole, via texasmonthly.com

For years I have been campaigning for a drastic change in the way Texas students are educated [“ ‘It’s Not a School Problem’ ”]. In Texas, as in many states, students are not educated but rather indoctrinated into rote memory and bubble-sheet standardization from which they emerge having learned nothing. Perverse? You bet it is! And the perversion rests squarely on the state. Our youngest students enter pre-K as excited and creative individuals. Thirteen years later—if they have not dropped out of school—they graduate as intellectually doddering dullards victimized by years of mind-numbing, endless testing. Why? Because excessive testing promotes failure, and public school failure promotes for-profit charter schools.
George Clayton, Educator and Former Member of the Texas State Board of Education,  Dallas

Professor Ravitch is our hero. Parents shouldn’t wait around for politicians to fix this mess, and we can’t expect teachers to jeopardize their jobs. The time has come for civil disobedience. Keep your kids home on test days.
Texas Parents Opt Out of State Tests, via Facebook

Losing our public school system saddens me. It could be the single greatest thing our country has ever had to offer. The ONE thing we owe the children of this country is an education. That is our hope! And it’s slipping away right before our eyes.
Tina Fennell Rodgers, via Facebook

Surely she can see the difference between one who pays his taxes under threat of seizure of his assets and criminal prosecution by the iron fist of government and one who voluntarily gives of his wealth out of the goodness of his heart.
Charles Ware, Lake Charles, Louisiana

While one can detect at least an attempt at (faux homespun) humor in the Texanist’s columns, putting down other states is rude and obnoxious.

I’m from New York City but live in Texas. My family’s roots are in Connecticut, where my forebears immigrated from Italy 130 years ago. Connecticut is far from bland. The seven counties of Connecticut have more culture, frankly, than the whole of Texas. The wealth of the state, without relying on “natural” resources such as oil and gas, surpasses Texas on a per capita basis, mainly due to a high level of education. It has some of the most beautiful rivers in the country, a gorgeous coastline, mountains, farming, incredibly beautiful colonial-era towns, and a university that puts any in Texas to shame (that would be Yale, FYI). Not to mention some of the best small colleges in the country. The history of the state and its role in the founding of our country speaks for itself. As to California, its two great cities make any in Texas look like backwaters.

What is it with Texans who feel they have to denigrate other states? Ignorance? Inferiority? A false sense of exceptionalism? Deflate your chest, buster. Learn some manners.

I have to go round up the cows now. Oh yeah, I’m a Yankee cowboy. Thirty head. My grandparents had a beef ranch (we call them farms) in upstate New York. I worked on it summers throughout my life to get a break from bland NYC.
Bob DiLallo, Fredericksburg

As a DT (displaced Texan), I wouldn’t wish to raise the ire of the Texanist, but in his comments regarding the origin of the honored title of “redneck,” I think he may just be a late bloomer.

Maybe fifty to sixty years ago, a gang of us got into a conversation about the subject. I can’t verify the validity of the facts as presented, but the consensus of opinion was that during the Civil War, some of the country boys were prone to forget who wore the gray and who wore the blue. To simplify the situation—and to prevent being shot in the back as a nonbeliever—whenever the Southern boys went into battle, they were convinced by their commander to wear a red bandanna around their neck. Hence the term “redneck.”
Arthur M. McAlister, Rancho Cucamonga, California