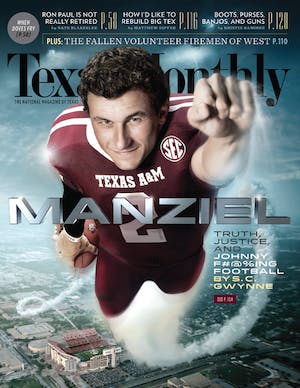 Not surprisingly our August cover story on the rising tide of Texas Democrats brought about a flood of feedback. Even noted lawmakers joined the fray. San Antonio mayor (and cover boy) Julián Castro garnered national attention from BuzzFeed and the Huffington Post after batting down a troll who’d tweeted a racist comment about the cover. And Republican senator Dan Patrick, from Houston, had a little fun with Photoshop, swapping out “Game On?” with a “Game Over?” and sharing his redesigned image with fans and followers.

Three pretty faces and a pair of pink tennis shoes do not turn a red state blue [“The Life and Death (and Life?) of the Party”]. There seems to be a lot of wishful thinking on the minds of the outs and a lot of overconfidence on the minds of the ins. Let the voters decide, now that our long-term governor has stepped aside.
Gerald Skidmore, Huntsville

So what models of good governance do Battleground Texas and Wendy Davis have to offer us Texans? Detroit? Chicago? California? New York? Most Texans, regardless of race, creed, or gender, will say thanks but no thanks.
Michael Klatt, Austin

In case you don’t know what happened, the pro-life conservatives won! And the vast majority of Texans are behind them! So why do you have losers on your cover?
Janet Turner, via email

@WendyDavisTexas’s filibuster is even more impressive now that I know she had one hard-boiled egg for breakfast.
@Ashleyschapitl

Robert Draper should move out of Washington, D.C., and back to Texas so he can write objectively about the state. The reason Texas is a red state has less to do with race and socioeconomic status than political ideology. Texas is fiercely independent. We don’t need government to exist. When this belief changes, Texas will be a blue state. And it will then die a slow death, just like the rest of the blue states.
Jon Klement, Mission

I can remember local elections in my hometown where, if you wanted to get elected, you ran as a Democrat, even if you were very conservative. But the thing Texas never was, and never will be, is a liberal state. The reason Texas has become a Republican state is that Democrats are leaning so far left.
Autonoe, via texasmonthly.com

If the good people of Texas ever think there’s a bright future in hitching their wagons to state senator Wendy Davis—a woman whose notoriety is almost exclusively based on her obsession with making the murder of babies easy—then may God have mercy on their souls.
Mark S. Peterson, Verona, Wisconsin

Good article. It gives one hope that there might be an alternative to moving out of the state.
Bob Sudela, via email

If yammering on for seventeen hours demanding the “right” to abortions after twenty weeks is what the Democrats view as a road to success in Texas, they’re in worse shape than meets the eye.
Scottinva, via texasmonthly.com

Great article! Wendy gave us Dems the kick in the pants we needed! Nice to know Battleground Texas is there to keep it going.
@becca_atx

The Democrats don’t have a shot in h—. But please put a lot of effort and money into trying. That way, your disappointment will be twice as bitter. I wish all Dems external hemorrhoids and ingrown toenails.
Kenpuck, via texasmonthly.com

The Flaw West of the Pecos

As well-written and informative as this article is, I am disgusted by the tone [“The Best Little Checkpoint in Texas”]. Al Reinert broke a law. He paid a measly fine and was somewhat inconvenienced. Willie Nelson broke a law, paid a measly fine, and was somewhat inconvenienced. The rest of us follow the law in all of our bourgeois ignorance and wonder about those who find the law so inconvenient. Thank God the vast majority of this country believes that “law abiding” is a duty. Now, there’s a concept for you, Al: duty. It means that we as a collective society have a responsibility to others. I know: If only I understood. If only I weren’t so uninformed or uptight. If only you could be left alone to do as you pleased. If only no one placed any expectations on you and others who are scofflaws. It’s all so tiresome.
Plumbago, via texasmonthly.com

It’s the duty of our lawmakers to construct laws that are rational and sensible. Penalizing someone for possessing and/or using marijuana does not make sense to the vast majority of thinking adults. Society will eventually realize that consumption of tequila is a far bigger problem; only then will this huge waste of time, money, and manpower be eliminated.
Superwittysmitty, via texasmonthly.com

I have to admit, a certain smirk crossed my face reading your article on the travails of Dell [“Dell and Back”]. I think one day business school students will study the rise and fall of Dell as a case study in hubris. Consider the basic Dell computer: for years it was littered with dozens of cut-rate trial versions of software, Dell-specific hardware drivers and control panels, and memory-sucking utilities. The consumer was assaulted with technical jargon, frustrating errors, viruses, incompetent technical support, and noise, simply to get email and surf the web.

Overwhelmingly, the unwashed masses never wanted a PC in the first place. Consumers always wanted ease-of-use and mobility. And with the rise of tablets and smartphones, consumers finally have the product they’ve wanted all along.

Thank you, texas monthly, for the awesome article on South Padre Island [“Come Padre”]. Having grown up in the Valley, I have spent many a day basking in the sun, fishing, drinking beer, and vacationing in that lovely, laid-back paradise. I am so sick of all these uppity “keeping up with the Joneses” posers raving about Destin, Florida. Aye yai yai. They obviously have not watched the sun rise from the south jetty while the kingfish are running or watched the sun set from the deck of Laguna Bob’s. And I won’t even get into sipping those turbos while listening to the Bongo Dogs live at Wanna Wanna.
Captain Groovy, Conroe

In his piece “Helping Hands Off,” John Daniel Davidson lauds the admirable and instinctive response of fellow Texans to come to the aid of the town of West after the deadly explosion in April. He goes on to examine the controversy over FEMA aid versus state and local aid, concluding that we somehow erode our freedoms by accepting outside aid rather than that provided by our neighbors. It seems to me that this debate should never have arisen in the first place.

Ever since the event I have noted with increasing frustration the lack of coverage of the salient questions surrounding this disaster: (1) Who owned the plant, and did they carry sufficient coverage for the potential loss in the event of an accident? (2) Was the storage of such a large amount of explosive material in a residential area a violation of the law? (3) Is the state’s inspection/oversight of such a facility up to the task of protecting our citizens?

If the question of self-sufficiency comes up in the wake of a disaster like this, it shouldn’t. If the responsible parties had acted responsibly in the first place, there would not have been the potential for a small fire to erupt into a terrible cataclysm.

It’s my understanding that FEMA assistance is designed primarily for natural disasters, of which we in Texas get our fair share. The explosion in West was an unnatural, man-made, foreseeable disaster, for which the plant ownership and, to a lesser degree, state government are responsible, and they should bear the onus for rebuilding and other assistance and support.
Paul Grazda, Kingwood

I thought your article about Rick Perry was somewhat confusing, as you seemed to vacillate between giving him credit for the good things that have happened in Texas and giving no credit at all [“Happy Trails”]. I was surprised that you failed to mention how much debt (in lieu of tax increases) the state has taken on during his tenure; the fact that he has set our education system back at least a decade because of inadequate funding; the fact that our property insurance premiums are among the highest in the nation; the fact that Texas has the highest number of uninsured in the U.S.; the fact that he refuses, with the okay of the gutless Texas Legislature, to accept Medicaid expansion; and the fact that, since he has appointed every single appointee in the state, we will pay for his tenure well into the future. Lastly, here is a man who expresses outrage at “big” government but had no problem mandating the HPV vaccine for young girls or appropriating land for the Trans-Texas Corridor. So in my view, his legacy is shameful.
Mike Yennie, Beaumont