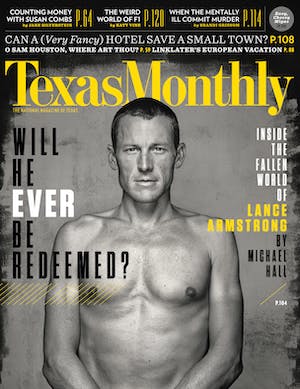 Our February issue reignited a number of long-brewing inter-city rivalries. While residents in all six of the major metropolises engaged in some form of my-city-is-better-than-your-city ribbing, it was the citizens of DFW who lobbed the most-heated barbs. Leading the charge were two of the area’s most recognizable voices, D Magazine editor Tim Rogers and Fort Worth Star-Telegram columnist Bud Kennedy, who took the banter they started in the issue (about what to call the North Texas megalopolis) to Twitter. Said Rogers: “Love the way you tried to make it seem like the Cowboys play in Fort Worth, Bud. Sneaky.” Retorted Kennedy: “Tim, do you think Dallas will ever get to host a Super Bowl? We had fun with ours.”

The February issue was a feast for this long-lost, homesick Texan. I laughed out loud at Larry McMurtry’s piece [“Horsemen, Goodbye”]—like a visit with an old friend. William Broyles’s description of Montrose in the early seventies was spot-on [“My Montrose”]. And I’ve been talking up Houston as a great and wonderfully diverse city for years—the New York of the South—and it was nice to have my opinion validated.
Carol Park, Lafayette, Colorado

I’m a sixth-generation Texan. I’ve lived here all my life and plan to stay until I die. However, if Texas starts looking like your February cover, I’m moving to New Mexico.
Sam Kirkendall, Oak Cliff

After reading your February issue cover to cover, I was left feeling sad for what we have lost. Long ago my hometown of Dallas became too loud, crowded, and vulgar for me. I know from extended visits to family in Houston that I could never live there. I moved to Austin and worked there and in San Antonio for 25 years and watched both cities try to become the next Dallas or Houston. I found that old laid-back feeling in southwest Fort Worth, but the developers must have been right behind me.

William Broyles [“My Montrose”] hit the nail on the head when he wrote, “People with money want to live where the cool people live, so they move in and drive up prices and the cool people can’t afford the cool area anymore.”

I’ve got one move left in me and I’m thinking Mineral Wells, but don’t tell anyone.
Buddy Musick, Fort Worth

As my Grandpappy would say, “What a load of horse manure.” Your former editor thinks it’s a good thing urban Texans voted for Obama and his unsustainable welfare state [Behind the Lines]? He thinks it’s a bad thing our governor is smart enough to want to rein in big, overspending government? He thinks urban values are better than rural values? Urban “values” are exactly what’s wrong with our country.

And our legendary Larry McMurtry [“Horsemen, Goodbye”] thinks Houston, an overgrown backwater swamp, is a world-class city? There are only three great cities in America: New York, Chicago, and San Francisco. The rest are just urban sprawl over endless suburbs. And, of course, all of our cities are dead-broke liberal jungles.

I need an adult beverage before I can read anymore hogwash tonight.
Ralphie Anderson, via email

A few thoughts for Gregory Curtis to ponder while he makes his next walk to Whole Foods for a latte [Behind the Lines]: Texas indeed has a competing rural and urban heart, not clearly defined by geography. For every wealthy urbanite who thinks happiness is convincing her husband to buy an alpaca ranch, there are lonely small-town teenagers who fantasize about city life as a never-ending episode of Friends. Myths and misperceptions abound in both visions. Likewise related is the urban/liberal/progressive heart versus the rural/conservative/family values folks. Curtis laments the latter as still controlling Texas politics overall and describes them and Rick Perry as country obstinate, willfully unenlightened heirs of Pappy O’Daniel and Pa Ferguson, intent on dismantling the progress made by our “sophisticated” urban dwellers and political leaders. Wow, and I thought Texas has fared fairly well during the past decade, which saw the rest of our nation suffer so much. Perceptions and prejudices aside, I’ll bet a far higher percentage of urban adults longs for the lifestyle of the wide-open spaces than rural folks pine to live in the city. You may yet grow weary of quirky record, book, and coffee shops and nonstop humanity. I’ll never get tired of a sunset.
Ronnie Cundieff, Jacksonville

After seeing the cover, I girded myself for a description of Dallas as “fake” or “not really Texan.” Still, it came as an unpleasant surprise to discover that my hometown is “a second-rate city.” Even more surprising (although not so much after researching the history of the perpetrator) was that the predicate came not from some Amon Carter acolyte but from the Melville of Texas himself: Larry McMurtry [“Horsemen, Goodbye”]. Why McMurtry would stoop to such a low is beyond this feeble mind.

This degradation, though, is not unique. For years I have wasted my breath defending this “fair burg” from smarmy attacks from friends of mine who call Austin home. “People are just cooler in Austin,” they say. Half of the people my age who live there are from Dallas or Houston. I tell my friends that they were cool long before they moved there. The thing is, too many of our fellow Texans from the south and west have wasted their breath critiquing Dallas as “not Texan enough,” and I can’t stand that crap. Shoot, it was we Dallasites who gave our statesmen (and the world) their first frozen margarita. It was Dallas that taught our neighbors the meaning of style when Neiman Marcus first opened its doors. And it was Dallas that embraced Texas’ steel-wheeled roots by building the nation’s longest light-rail line, while drivers in Austin and Houston continue to choke in gridlock. So spare us the un-Texan saws. Hell, I might suggest that the rest of you are a bit too Texan, gallivanting across the Coastal Plains with your steel-tipped belts and covering every square inch of your furniture in cowhide. I understand that none of my ramblings will do anything to repair the damage Mr. McMurtry has done. He wins. One hundred thousand Americans reading your column are remarking, “Let’s spend our Labor Day in Houston, honey! Larry McMurtry called it his Paris.” Have fun with that.
Collin Cole, via texasmonthly.com

Larry McMurtry’s piece regarding the civilizing of Texas is clever, honest, and too short. Give him more space, TM.
Sam McQuillin, via Twitter

Tell Tim Rogers that those of us who live in Tarrant County “give a shit” [“Don’t Call It the Metroplex”]! We are NOT Dallas and resent being referred to as such. Big time!
Frances Gregory, Arlington

I am a Texan, born and raised, and take great offense at Rogers’s comments regarding Fort Worth. I will never associate myself with Dallas, say I am from Dallas, or even drive across the county line, because everything I will ever need is here in the great city of Fort Worth, Texas.
Keri Moorhouse, via email

What a delight it was to read about Montrose then and now [“My Montrose”]! Living in a rented house on Missouri Street, just a few houses from Montrose Boulevard, in 1967, I walked past the old Felix Mexican restaurant to Art Wren’s to work the graveyard shift as a waitress every night.

As a young Hispanic from a small town in South Texas, this was the best education in diversity anyone could have had. After midnight, the cafe turned into a psychedelic circus, with hippies, gays, hustlers, and uptight straight people. People befriended me and told me many life stories. Eventually I went to work at the Sea Gull, on California Street. Going to the old Minimax, on Westheimer, to run an errand for the bartender, I remember how much I wanted the Green Stamps (some will not know what those are) to finish the book I needed to buy my newborn a baby buggy. A bar patron left an anonymous cash donation for me to buy the stroller. Gay patrons brought me designer shoes in the small sample size I wore, telling me the shoes had been in the store window a bit too long. I remember the goodness of people and their many kind acts, in spite of their looks and/or their lifestyles.

Thank you for bringing the old Montrose back for me! What a wonderful place it was.
Diana Rendón, Florence