The fantastic and engrossing “Of Meat and Men” left me flashing back to childhood weekends spent at my dad’s place in Waco: Hugh’s Pit BBQ [February 2012]. We’d go with him to Buffalo to get special wood and then kick the sawdust on the floor while consuming insane amounts of meat and Big Red.
Audrey Pudder
via email

Hearing all the hype about Franklin Barbecue, in Austin, my husband and I went on our anniversary, figuring it was a fitting way to celebrate. We dutifully waited in line (we were early, so there were only about thirty people ahead of us). We got our barbecue. We sat down to eat it. Then we looked at each other. Eh. It was okay, but nothing to write home about. The coffee-based sauce was nice, I will say that.

But I still don’t get it. And I’ve been eating barbecue—really good barbecue—for a long time, back to the days of Jerry Jacobs (where Green Mesquite, in Austin, is now). But then, I’ll drive straight through Lockhart to City Market in Luling, given my druthers. Though there’s also this great little place in Bartlett . . . The longtime Texas barbecue wars continue.
Tricia Jumonville
Jarrell

I encourage you to enlist the aid of the Texanist to review any articles related to historical subjects. I got no further than the third line of “The Paper Chase” to find an error regarding John Wesley Hardin’s misadventure in Comanche County [February 2012]. Deputy Charles Webb was from Brown County—not Comanche, as stated. Although Mr. Hardin was credited (or discredited, as the case may be) with numerous killings, this was perhaps the most notorious and the one that sent him to prison. It was also the most controversial, as contemporary accounts have Mr. Hardin defending himself from a gun-wielding deputy. Many believe that it was his reputation that sent him to prison, not the shooting itself.
Reverend Tom Thornell
Lockhart

Editors’ note: You are absolutely correct about Deputy Webb’s county of origin. We regret the error.

Many thanks to Wallace Jefferson and Bill Kroger for all they’re doing to preserve historical documents. If they ever set up an organization, I’ll join.
Connie Juvan-Savoy
Houston

Jefferson and Kroger might enjoy Bill Neal’s trilogy, Getting Away With Murder on the Texas Frontier; From Guns to Gavels: How Justice Grew Up in the Outlaw West; and Sex, Murder, and the Unwritten Law: Courting Judicial Mayhem, Texas Style. Neal traces the evolution of jurisprudence in the area from Gatesville to Dalhart, Odessa to Guthrie, Oklahoma, looking at how lurid events were sliced and diced through an immature legal system. They, like “The Paper Chase,” are excellent reads.
Ken DuBoise
North Richland Hills

While flipping through the pages of my latest TEXAS MONTHLY to determine which article to read first, I immediately recognized those old county record books. I’m a family-history buff, and I have spent many hours within them. My first encounter was several years ago, in Wharton County. The clerk’s assistant took me down to the basement, explaining that if the deed books did not have a record of my ancestor, then I should look at tax books, ’cause every household was taxed for something. Alas, nothing was found, but I later hit pay dirt in Grayson, Cooke, and Coryell counties. So I thoroughly enjoyed the article, which confirmed what I knew: there is a lot of intriguing history stored in those county archives.
Doyce Cooke
via email

Your article about Rick Perry and his future (if any) made me realize that it’s not so much about Perry’s being the longest-serving governor in Texas history as much as it is about the people who keep electing this man [“Is There Life After Rick Perry?” February 2012]. Does Perry’s continued hold on the office of governor say anything about his ability as a leader, or does it address the ignorance of the people who voted for him? Another term for Rick Perry as governor? God, let’s hope not.
Robert Jones
San Antonio

Dammit, boy, in your description of how to start a fire, you missed an essential opportunity to espouse the use of one of East Texas’s greatest natural resources: rich lighter pine, a.k.a. pine knot or fatwood [The Texanist, February 2012]. The crystalline, turpentine heart of an old, dead, rotted pine log or stump you pick up while wandering in the woods squirrel or deer hunting (or lost) will burn with vigor even under the most damp of circumstances. Rich lighter pine is compact and portable and burns hot as hell and is the best air freshener you can find. Hell, when I send care packages to friends out of state or soldiers fighting in various locales, I always throw in some pinecones and a nice chunk of rich lighter, but not before shaving some off in the box with my pocketknife, just to make sure that when the box is opened you can tell where it came from without even reading the label. If you are interested, I’d be happy to send you some for your inspection and use. I might even throw in a few Chick-O-Sticks and Peanut Butter Bars from the Atkinson Candy Company here in Lufkin as well.
Joshua Smith
Lufkin 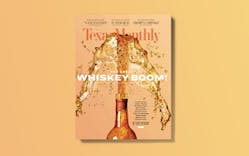 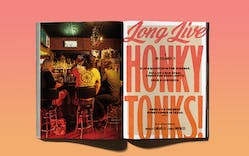 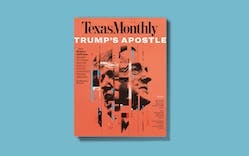 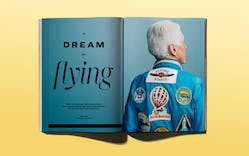