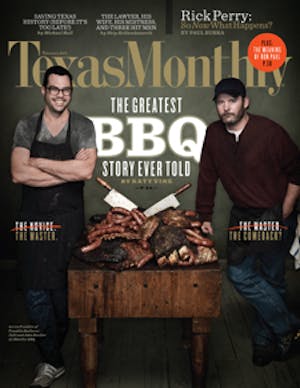 While “Up and Eat ’Em” included many excellent places, any list that doesn’t mention Norma’s Cafe and the Mecca, in Dallas; the Elite, in Waco; or Ol’ South Pancakes, in Cowtown, is seriously flawed [December 2011].
Bill Robinette
Dallas

You missed the best: Kerbey Lane, in Austin, for gingerbread pancakes; the Fountain View Cafe, in Houston, for great biscuits; and the Sunflower Bakery and Cafe, in Galveston, for the richest, most decadent breakfast entrée, lump crabmeat Benedict. Need I say more?
Bob Mahan
Cypress

How could you overlook the Toddle Inn, in Brownsville?
Beto Sierra
Brownsville

And what about Denton’s Oldwest Cafe?
Pat Cheek
Denton

Wow! Of the hundreds of articles I’ve read in TEXAS MONTHLY, nothing has ever grabbed me and held my attention more than the accounts given by those who fought and survived the wildfires in Texas [“Trial by Fire,” December 2011]. One can see the fires on television and feel a measure of concern and sympathy, but it doesn’t come close to making the horror, fear, and desperation come to life the way reading about the experience of those you chose to feature in the article did.
David T. Seay
Franklin, Tennessee

Toward the end of “Up in the Air,” TEXAS MONTHLY made a very important factual error in its reporting. Nate Blakeslee wrote, in part, “In early October, the EPA announced a modification of the CSAPR rule as it applied to Texas and several other states. The agency . . . announced that Luminant would be given more time to comply with the required reductions in sulfur dioxide emissions” [December 2011].

When the EPA announced its proposed revisions in October, it did not announce that more time would be given to Luminant or the State of Texas. In fact, the compliance date continues to be what was announced in early July: January 1, 2012.

This point is especially important to Luminant, as it is one of the central arguments of our legal case—that this highly compressed and unprecedented time line will cause harm to our employees, our operation, and the communities we proudly serve across Texas.
Allan Koenig
Energy Future Holdings
Dallas

Editors’ note: While we appreciate Mr. Koenig’s response, we stand by the story’s description of the impact of the EPA’s proposed changes to the Cross-State Air Pollution Rule. We did not report that the EPA had changed the compliance date for the CSAPR rule, nor did we mean to imply that this had occurred.

When the EPA announced its proposed revisions to the rule in October, it in effect marginally increased the amount of emissions Luminant’s plants would be allowed to produce. According to the EPA, this would allow the company to continue operations without installing pollution controls or buying additional credits—or shutting down boilers—until late 2012.

The EPA has also proposed delaying implementation of the rule’s penalty provisions until January 1, 2014. The EPA has characterized each of these proposed changes as giving Luminant “more time” to comply with the rule, which is the phrase we used in the story. Negotiations between Luminant and the agency are ongoing.

This story never gets into the merits of or the process by which CSAPR was developed. It simply assumes that the rule was always meant for Texas and is the right thing to do for the state and its consumers.

The article never asks the question, Why was Texas added to the rule at the last minute? Originally Texas wasn’t even included in the cross-state rule. That’s a pretty good indicator that the EPA may be the one playing politics here.

Fact: the EPA has not identified any monitor in a downwind state affected by emissions from Texas power plants that is not already meeting federal air quality standards. So why, without clear evidence of a problem, was Texas included?

Unfortunately for consumers in Texas, the desperate need for this administration to take credit for air emission reductions from power plants before the next election means they will have to suffer, regardless of the facts or the law. It’s a good thing the election is in early November. There will be less chance of rolling blackouts on Election Day.
Bill Hammond
Texas Association of Business
Austin

Mimi Swartz has a blind spot when it comes to personal injury trial lawyers that has caused her to misdiagnose what ails the Texas Democratic party. Contrary to Swartz’s “Left Behind” column, trial lawyers’ giving to Democratic candidates has continued to rise over the last decade despite the passage of tort reform in Texas [Behind the Lines, November 2011]. A quick check of campaign finance reports shows that in the past three election cycles, trial lawyer campaign contributions matched the combined contributions of their opponents, which includes every other business, industry, and profession in the state. In 2010, for example, the top ten trial lawyer contributors and the top ten tort reform contributors both gave about $16 million.

But Swartz is right that tort reform has had a significant negative impact on the Texas Democratic party. The Democrats’ almost exclusive reliance on trial lawyer money to fund their campaigns makes them suspect to the majority of Texas voters in both political parties who support lawsuit reform. This suspicion is confirmed when Democratic leaders make the trial lawyer agenda a priority in the state legislature. Until this changes, Texas Democrats will continue to struggle.
Sherry Sylvester
Texans for Lawsuit Reform
Houston