You folks must be a passel of damn Yankees. First, in Texas we don’t “make” our grub; we “fix” it [“Home Plates,” April 2011]. As in, “I believe I’ll fix some breakfast.” Second, that Dutch oven y’all show on page 112 appears to be a plain ol’ cast-iron pot. A real Dutch oven has three short legs on the bottom and a rimmed convex top as well as a bail to carry it. I do thank you, however, for all those recipes. I will likely fix some of them soon.
Glen L. Hunt Jr.
Bedford

The greasy slop recipes in “Home Plates” are disgusting and the photos were stomach turning. The chili looked like diarrhea, the meat was charred and carcinogenic, and anything fried and/or covered in cheese and grease is disgusting. The enchiladas look like exudate from an untended wound. Doves wrapped in cream cheese and bacon destroys the delicious taste of doves. I’ve lived in Texas all my long life and I have never eaten such horrible food. Anyone eating the food in “Home Plates” would soon be butt-sprung, gut-busted, old before their time, and headed for the cardiac care unit. Even if these recipes are only “tongue in cheek,” this article will only promote the belief that Texans are ignorant, tasteless, and crude backwoods rednecks!
Barbara Duvall Wesolek
Houston

The press and media proclaimed the trial of Elmer Wayne Henley, which was moved to San Antonio on a change of venue, as “the trial of the century” [“The Lost Boys,” April 2011]. At the very impressionable age of thirteen, I sat in on two days of testimony because my father was the presiding judge. I was somewhat aware of what Dean Corll had done but Henley was the talk of the town. I saw mothers cry on the witness stand as they identified their sons’ clothes. I saw the plywood with handcuffs and Corll’s “toolbox” and all of its contents. I heard testimony on how those contents were used. There’s no excuse for Henley and David Brooks to have allowed Corll to perpetuate his madness, and they should remain in prison. But I want to thank Skip Hollandsworth for opening my eyes to who the monster really was. I, like Houston, had forgotten.
Scott Dial
San Antonio

As a student reporter at the University of Texas in the early seventies, I was assigned a story regarding the first-year anniversary of the disappearance of Jeff Konen, a bright and handsome freshman who hardly fit the mode of a typical runaway. I traveled to Houston to interview his perplexed parents and his beloved Sonia. Although they feared foul play, they could not have imagined his horrendous fate. Mistakenly, we thought we were living in a safer world, so it is perhaps a timeless lesson for all parents in teaching caution and preparedness. For me it will also be the ultimate contrast of good and evil and certainly will not be forgotten.
Brenda Partin
Cypress

A million thanks for letting Kinky speak his mind [“My E-piphany,” April 2011]. He is without a doubt one of the most insightful men who ever dared to write it all down. I too, like Kinky, find it difficult to get my brain around all this technology that is being shoved down our throats. Why do we need to be accessible 24 hours a day? Furthermore, why is every little bit of personal minutiae suddenly something that needs to be Tweeted, twitted, or blogged for all the world to drink in and embrace? When did we become so important? Keep on Kinky-ing. It makes a good magazine damn near great.
Estelle Drozen
Pacific Grove, California

I must disagree with your portrayal of Eva Longoria, and I can assure you that she is anything but desperate or a diva [Hollywood, TX; April 2011].

I had the pleasure of meeting Ms. Longoria several years ago when she formed Eva’s Heroes, an organization that provides children and young adults with disabilities with an afternoon school program, a summer program, and monthly activities designed to help them function more independently. Ms. Longoria came to the Capitol a few weeks ago for a rally against proposed budget cuts that would have a devastating impact on state health services for people with intellectual and developmental disabilities and their families.

Earlier that day, Ms. Longoria had flown to San Antonio on a red-eye from Los Angeles to participate in a similar rally at Morgan’s Wonderland park, a family facility dedicated to serving people with disabilities. Ms. Longoria’s plans had not originally included a detour to Austin, as she had to be back in Los Angeles very early the next morning to finish filming an episode of her show to air that Sunday. However, after meeting face-to-face with families and hearing their stories and concerns, she felt the situation was so imperative that it required her advocacy in Austin. She then spent the rest of her day pounding the pavement of the Capitol’s halls to meet with as many key lawmakers as possible, advocating passionately against balancing the budget on the backs of people with disabilities.

While you provided your readers with a passing glance into some of her philanthropic efforts in a footnote, it is unfortunate that your article of more than one thousand words failed to include a single one regarding her advocacy and service to people with disabilities. In doing so, your article did not properly credit Ms. Longoria for her tireless hard work and passion she devotes to these causes, and I am confident that if you ask anyone whose life has been touched by her selfless efforts and advocacy, they would feel the same.
Senator Leticia Van de Putte
San Antonio

As I read Behind the Lines, I got madder with each paragraph [April 2011]. It’s bad enough that Governor Perry is trying to kill public education in Texas, but to go after our university system is too much. It made me wonder what could cause him to do these things and act so un-Texan. Then I found the answer on page 113. His last meal would include bing cherry congealed salad and Miracle Whip. God help us all.
Buddy Musick
Fort Worth 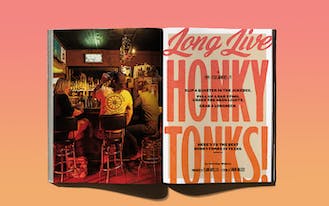