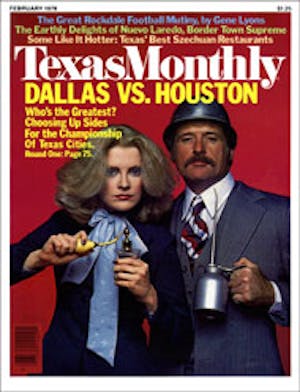 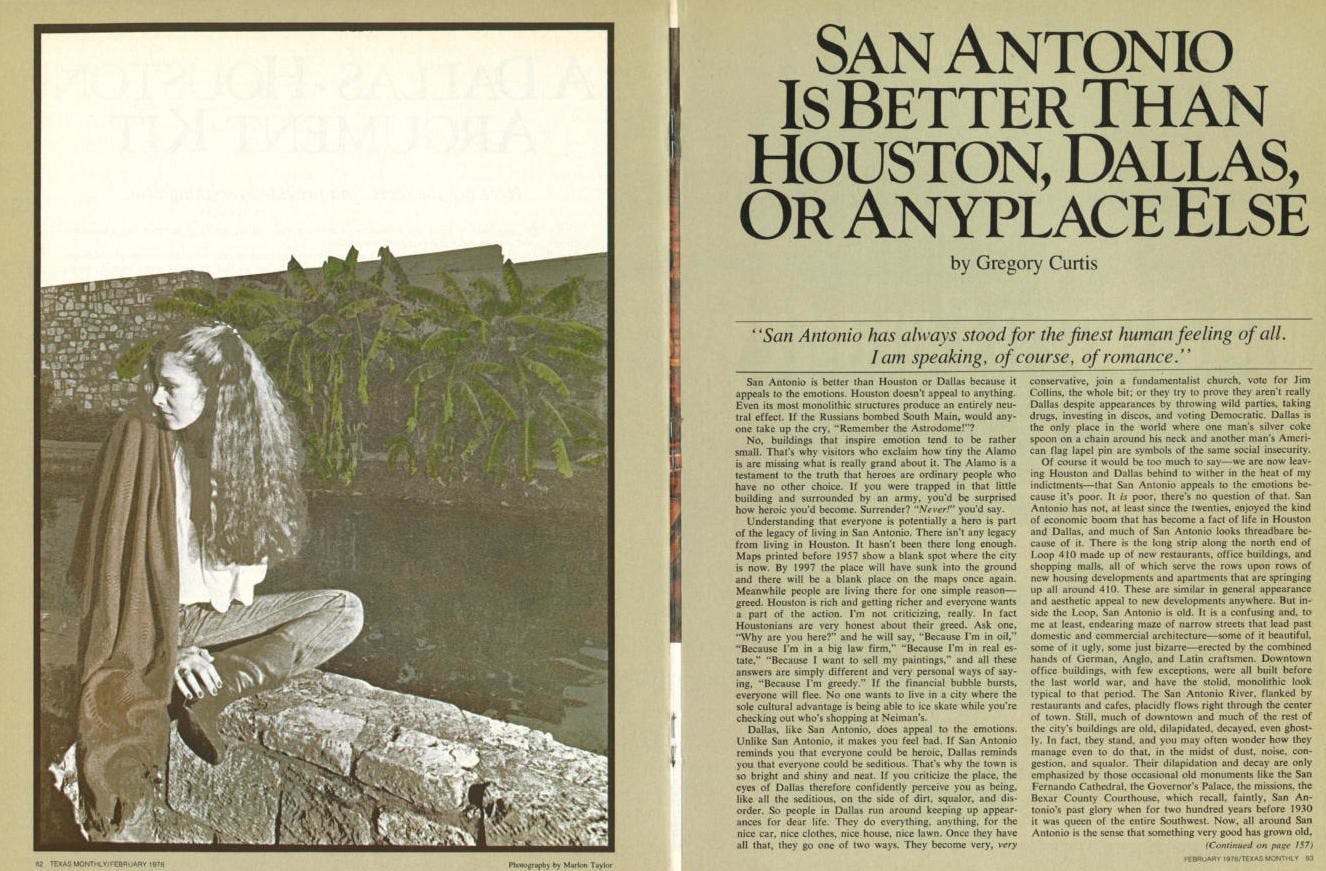 San Antonio is better than Houston or Dallas because it appeals to the emotions. Houston doesn’t appeal to anything. Even its most monolithic structures produce an entirely neutral effect. If the Russians bombed South Main, would anyone take up the cry, “Remember the Astrodome!”?

No, buildings that inspire emotion tend to be rather small. That’s why visitors who exclaim how tiny the Alamo is are missing what is really grand about it. The Alamo is a testament to the truth that heroes are ordinary people who have no other choice. If you were trapped in that little building and surrounded by an army, you’d be surprised how heroic you’d become. Surrender? “Never!” you’d say.

Understanding that everyone is potentially a hero is part of the legacy of living in San Antonio. There isn’t any legacy from living in Houston. It hasn’t been there long enough. Maps printed before 1957 show a blank spot where the city is now. By 1997 the place will have sunk into the ground and there will be a blank place on the maps once again. Meanwhile people are living there for one simple reason—greed. Houston is rich and getting richer and everyone wants a part of the action. I’m not criticizing, really. In fact Houstonians are very honest about their greed. Ask one, “Why are you here?” and he will say, “Because I’m in oil,” “Because I’m in a big law firm,” “Because I’m in real estate,” “Because I want to sell my paintings,” and all these answers are simply different and very personal ways of saying, “Because I’m greedy.” If the financial bubble bursts, everyone will flee. No one wants to live in a city where the sole cultural advantage is being able to ice skate while you’re checking out who’s shopping at Neiman’s.

Dallas, like San Antonio, does appeal to the emotions. Unlike San Antonio, it makes you feel bad. If San Antonio reminds you that everyone could be heroic, Dallas reminds you that everyone could be seditious. That’s why the town is so bright and shiny and neat. If you criticize the place, the eyes of Dallas therefore confidently perceive you as being, like all the seditious, on the side of dirt, squalor, and disorder. So people in Dallas run around keeping up appearances for dear life. They do everything, anything, for the nice car, nice clothes, nice house, nice lawn. Once they have all that, they go one of two ways. They become very, very conservative, join a fundamentalist church, vote for Jim Collins, the whole bit; or they try to prove they aren’t really Dallas despite appearances by throwing wild parties, taking drugs, investing in discos, and voting Democratic. Dallas is the only place in the world where one man’s silver coke spoon on a chain around his neck and another man’s American flag lapel pin are symbols of the same social insecurity.

Of course it would be too much to say—we are now leaving Houston and Dallas behind to wither in the heat of my indictments—that San Antonio appeals to the emotions because it’s poor. It is poor, there’s no question of that. San Antonio has not, at least since the twenties, enjoyed the kind of economic boom that has become a fact of life in Houston and Dallas, and much of San Antonio looks threadbare because of it. There is the long strip along the north end of Loop 410 made up of new restaurants, office buildings, and shopping malls, all of which serve the rows upon rows of new housing developments and apartments that are springing up all around 410. These are similar in general appearance and aesthetic appeal to new developments anywhere. But inside the Loop, San Antonio is old. It is a confusing and, to me at least, endearing maze of narrow streets that lead past domestic and commercial architecture—some of it beautiful, some of it ugly, some just bizarre—erected by the combined hands of German, Anglo, and Latin craftsmen. Downtown office buildings, with few exceptions, were all built before the last world war, and have the stolid, monolithic look typical to that period. The San Antonio River, flanked by restaurants and cafes, placidly flows right through the center of town.

Still, much of downtown and much of the rest of the city’s buildings are old, dilapidated, decayed, even ghostly. In fact, they stand, and you may often wonder how they manage even to do that, in the midst of dust, noise, congestion, and squalor. Their dilapidation and decay are only emphasized by those occasional old monuments like the San Fernando Cathedral, the Governor’s Palace, the missions, the Bexar County Courthouse, which recall, faintly, San Antonio’s past glory when for two hundred years before 1930 it was queen of the entire Southwest. Now, all around San Antonio is the sense that something very good has grown old, lost its will, given up. The city is neither what it was nor what it could have been.

It’s a tragic place, really, but that is exactly its strength. Tragedy implies loss and loss implies dolor, as San Antonio tends to put it, and dolor is a humbling, human emotion that keeps heads from swelling and helps everyone get along. Tragedy also implies a sense of history and an awareness of history breeds both pride and compassion—pride because you are aware of what is noble in your past, compassion because you are also aware of what is venal. Nor is this awareness of tragedy enervating, neither, paradoxically, is it sad. For tragedy, because it leads to dolor, pride, and compassion, is the basis for the finest human feeling of all, the feeling that San Antonio has always stood for. I am speaking, of course, of romance.

It isn’t just the river, although certainly it is the river, too. Clearly, San Antonio is the only city in the state that knows how to enhance nature. Dallas is a place so threatened by the demands and rhythms of natural things that it moved completely away from the Trinity. Now the banks of what should have been Dallas’ greatest natural resource are the domain of roving packs of wild dogs. Houston has a bayou; it smells. Houston has an ocean, too, or at least is near one. But oceans, despite popular thought to the contrary, really aren’t much good for romance. Oceans signify the eternal, the unchanging. Romance is not that way at all. Like a river, it passes; like a river it changes. And the restaurants and cafes along the San Antonio River are places where food, drink, romance, and romance’s most evocative natural correlative can all be indulged at once.

Now, in addition to history, tragedy, and a river, a city needs still something more to be romantic. It needs freedom from guilt. Clearly, guilt is dominant in Dallas. I’m not sure exactly why. No outsider is. But deep in its heart Dallas knows it’s done something wrong. Houston is simply too frenzied to feel guilt or anything else.

But San Antonio is guiltless because it’s Catholic. I don’t mean to sound too popish here. I can cuss the Catholics as well as the next man and, more than that, I am aware of the havoc and cruelty with which the Catholic conquerors in South America, Mexico, and the Southwest enforced their domination. But I also believe in giving credit where credit is due and Catholics know how to provide an atmosphere where a city can grow into a very human place to live. Dublin, because all Irish are fools, is the great exception, but look at Rome, look at Paris, look at New Orleans, hell, look at San Antonio. (Naturally these great romantic cities, steeped in history and tragedy, all have rivers, too.)

Catholics make good cities in part because of their attitude toward sin. Cities, good cities, despite Dallas’ determination to the contrary, are sinful places. They’re supposed to have food, wine, music, dancing, and a strong pulse late into the night. Catholics see all this as perhaps sinful but in a very minor way that can quite easily be absolved. So the city thrives. San Antonio’s food, although good, is far from Parisian standards; its music, although plentiful, varied, and original, can’t compete with New Orleans’; but wine, at least in a pinch, is wine, and dancing is dancing anytime. This ecstatic atmosphere, present up and down the river on almost any night, culminates in San Antonio during Fiesta, a week-long romantic celebration unmatched anywhere else in the state and, except for Mardi Gras, which it slightly resembles, anywhere else in the country. Neither Houston nor Dallas could mount a celebration that attracted the entire population, and if either place were foolish enough to try, murder, looting, perhaps open warfare, would undoubtedly be the result. People really don’t like each other much in those places. In San Antonio, of course, it’s different.

I am aware that, up to now, my defense of San Antonio has been more impressionistic and philosophical than specific. There have been neither statistics, detailed descriptions, nor endless lists of civic virtues, cultural institutions, sports events, parks, neighborhoods, leading citizens, favorite watering holes, schools, or (and these are what provide the real key to Houston and Dallas) department stores. Nor will there be found in the remaining paragraphs any statistics, detailed descriptions, or endless lists of civic virtues, cultural institutions, sports events, etc. San Antonio has less of all that, it’s true. Houston and Dallas have more. But as Duke Ellington, a man of clear intuition if there ever was one, frequently remarked, “It don’t mean a thing if it ain’t got that swing.”

I will, however, include one single, very minor, yet wonderfully typical personal experience because it illustrates two qualities that all romantic cities have and that San Antonio has in abundance. They are spontaneity and unpredictability arising beneath the long shadow of history, beauty in the midst of tragedy:

I was walking through Brackenridge Park with my wife one late summer afternoon. The shadows had lengthened, the heat had relented just a bit, and we had some time before meeting friends for dinner. We stopped near the edge of a small field to lie on the grass beneath an oak. Several families, the young couples tending both tiny children and elderly parents, sat on blankets nearby. A group of small boys played touch football. Four adolescent girls watched them solemnly. A solitary college student sat on a bench reading a thick textbook. He underlined long passages with a Magic Marker.

We sat for a while. Idly, my wife pointed at a bandstand about thirty yards away. “I wonder when they use that,” she said. At that moment a black panel truck stopped nearby. Eight Latin gentlemen in blue brocade tuxedos began unloading music stands and brass instruments from the truck and arranging them on the stage. Within minutes the band was playing. Marimbas and timbals kept the beat; saxophones and trumpets took the melody. The people in the park listened intently at first, then returned to what they were doing but surrounded now by music. Everyone was happy. Later, when the time had come to join our friends and my wife and I began walking toward our car, we could hear the band from a long way behind us still playing brightly in the darkness.