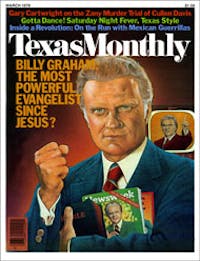 The Baptists call it succumbing to the influence of “the Devil’s music.” Television, the movies and the mushrooming entertainment business threaten it constantly. Yet that simple once-a-week celebration known as the Saturday Night Dance not only survives but thrives across Texas. No social custom so universal is, at the same time, so diverse. Folks in sleek Cadillacs and broken-down pickups are lured by its promise. Blue jeans, powder-blue tuxedos and every mode of dress in between are the attire. The dance itself may range from the precise whirl of the fox-trot to a seizure of inspired improvisation like the alligator.

Unlike other public pursuits of pleasure. the dance helps preserve Texas’ polyglot culture, defining social groups and protecting and passing on folklore better than any activity except weddings and funerals. The Greek philosopher Plato was so enamored of feet shuffling rhythmically to music that he gave dancing a high priority in his ideal republic: it would act as a social binder, cultivating a “noble, graceful, and harmonious attitude.” Several civilizations and a less-than-perfect world later, if you quoted the sage, say, at Gilley’s in Pasadena, you might wind up with a busted lip for wising off.

The only bond between revelers from the Alma Latina Dinner Club in San Antonio and dancing devotees at Our Mother of Mercy Catholic Church in Beaumont is that they all bump and writhe with the same inspiration whenever their house bands strike up a blues classic like “Mathilda;” otherwise, the Mexican Americans couldn’t even communicate with the French-speaking Cajuns of East Texas. Similarly, Cotton Club regulars from Lubbock would feel like lost little dogies inside the pseudo-plush Wintergarden Ballroom in Dallas until they heard the whistle signaling the start of the mating dance called the “Paul Jones.”

Even the grand palaces that host these rites of joyful madness retain the personality of their guests. Several cedar-sided halls in Central Texas that have operated continuously since the 1880s not only testify to loving German craftsmanship, but their worn floors also bear witness to the hundreds of polka bands that have occupied their stages. A franchise could never reproduce the sturdy magnificence of East Bernard Riverside Hall, its shape altered by numerous expansions over fifty years. Even a spartan, prefab steel building, the most popular and practical structure for a modern dance facility, assumes a singular quality by virtue of a conspicuous hand-lettered No Hats Please or the invisible smell of gumbo wafting from the kitchen.

But it’s the people who dance at the thousands of halls, clubs, bars and joints that make the difference. And the reasons for being there vary with each individual. The dance in Texas isn’t merely moving in time with a partner. It is a great opportunity for meeting people, getting some exercise, falling in love, breaking up, drinking and cleansing the soul. Many people go dancing because they’ve been doing it all their lives as their parents and grandparents did before them. In hundreds of small towns across the state the dance is the only live show around.

It has been part of the Texas fiber since Cabeza de Vaca watched the Karankawas dancing on the beach. For early colonists, the dance hall was the first luxury a community indulged after essentials like shelter, a reasonable defense and a church were constructed. The dance furthered Texas’ abundant musical heritage as well. Long before the radio and the phonograph were invented, musicians and bands populated the state in numbers that now might seem disproportionate to the dancing public. The insatiable demand for waltzes and two-steps prompted Bob Wills to change his bow stroke from the frenzy of Appalachian bluegrass to a smoother, more fluid style tailored for gliding couples; history recorded the adjustment as the birth of Western swing. Even today, touring country bands adapt their repertoires when performing in the Southwest in deference to audiences that really move.

The evolution of kicker dancing is just one part of the story. The state throbs with a variety of convivial places where the customers are the main act. Greeks, Creoles, cowboys, Mexican Americans, rock ’n’ roll teens and Fred Astaire disciples each define the ritual in their own peculiar way. Threading this dissimilar patchwork of celebrants together is the tinge of anticipation felt by all when the sun sets Saturday on another hard week. As you can see in the accompanying photographs, it is the signal that Texas Saturday Night has begun.

Through a Historic Trail Ride, Black Cowboys and Cowgirls Are Take Ownership of Their Role in History