From a honky-tonk in Odessa to a tejano bar in San Antonio to a Catholic church—yes, a church—in Houston, there’s one night of the week that brings out the shiniest buckles, the shortest dresses, the smartest hats, the tightest jeans, the starchiest shirts, and the flashiest bling. 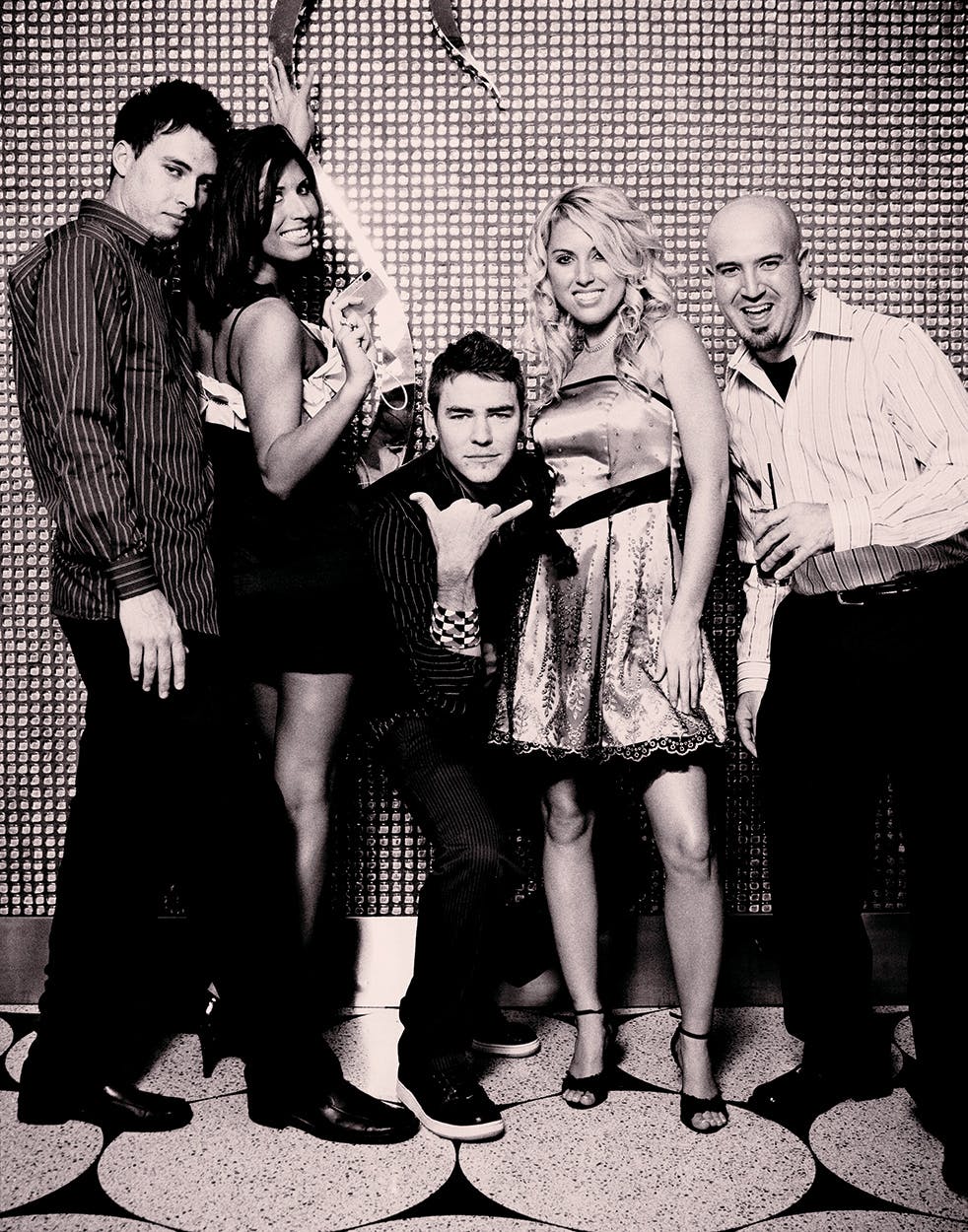 I change up what I wear every day. Ghostbar doesn’t like sneakers, but I’m definitely rocking some black Nikes with my pinstripes and my checkered wristband. When I go out, people say, “Hey, where are your dress shoes?” I have a few pairs, but that’s just not me. I’m more laid-back. I wear a lot of vests with V-neck T-shirts, blue jeans, and my Chuck Taylors. I’m in a rock band, and sometimes when I’m performing, I’ll wear a black shoe on my left foot and a white one on the right. I want to look good, but I just go with the flow, man. 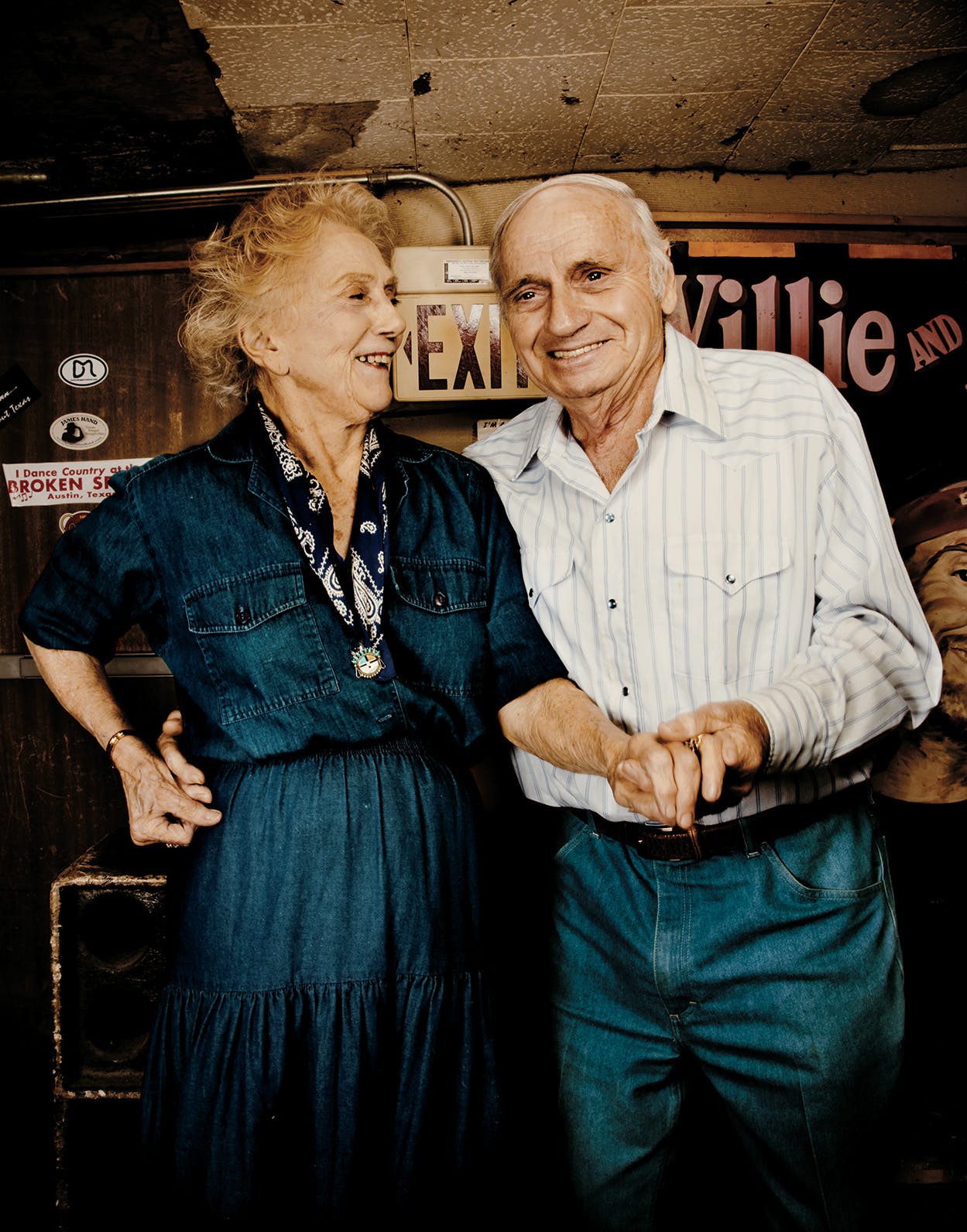 I dance regularly at the senior activities center in Austin, and I mostly wear street clothes. But this was my first night at the Broken Spoke. I went with my over-fifty singles group, and I wanted to dress appropriately, so I wore my Western skirt and denim blouse. It used to be that you’d always get dressed up to go dancing. 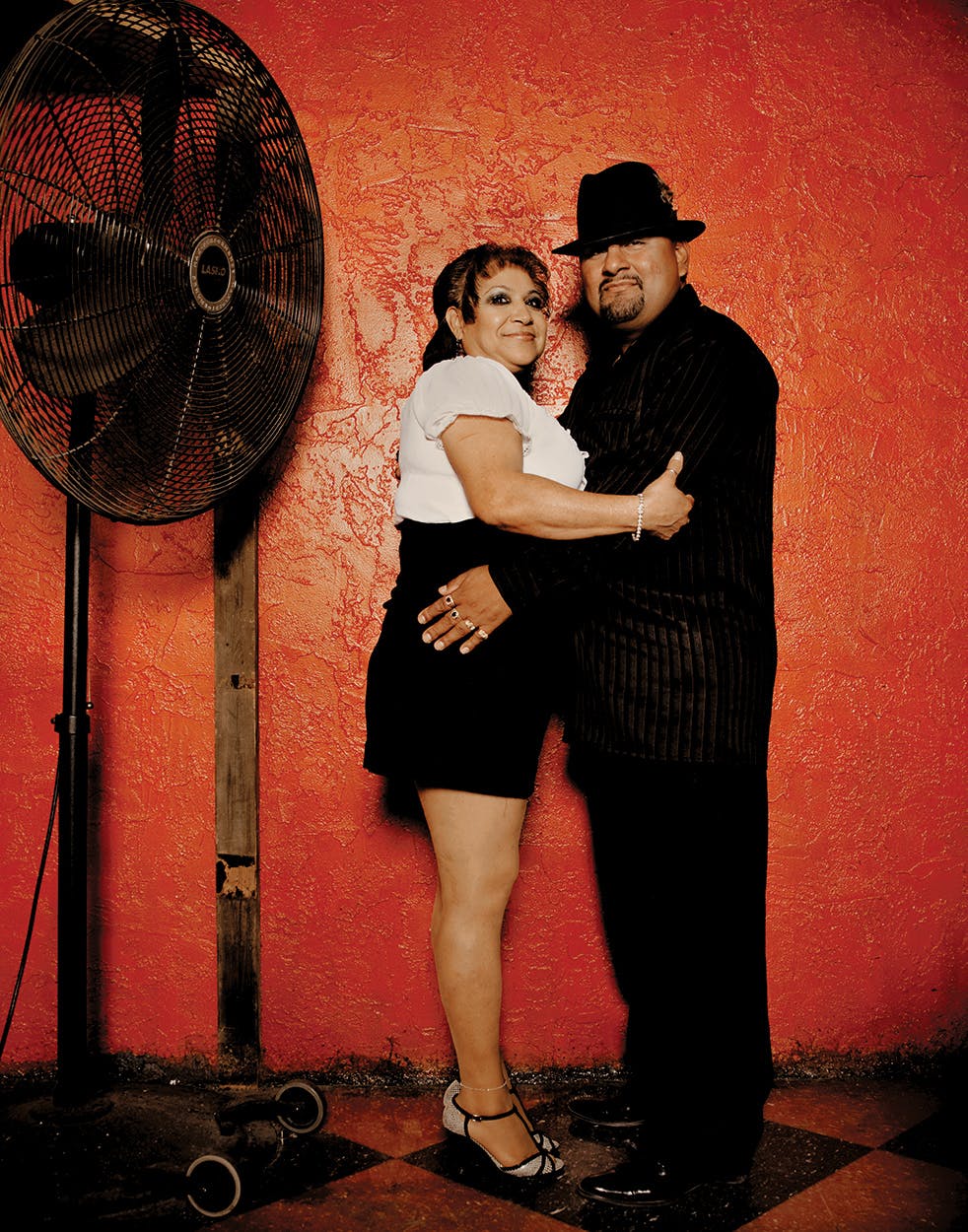 I have a reputation for being a sharp dresser. I’m known for my zoot suits, and I just purchased a black suit with a zebra lapel and a zebra stripe on the pants. I’ve always been into a classier pachuco look, like this black walking suit, which has a sheen to it. And you’ve got to top it off with a hat. I guess you’d describe this one as my Tom Landry look. As for all of my rings, well, I have to have my jewelry. I guess you could say I’m sort of a hippie who cares . . . about himself. I like my leather jacket, and I’m never without boots, because they make me two inches taller. My band, Stereo Is a Lie, had its first show tonight, so I stuck to dark colors. I’ve gotten comparisons to everyone from Jesus to Chris Robinson of the Black Crowes. 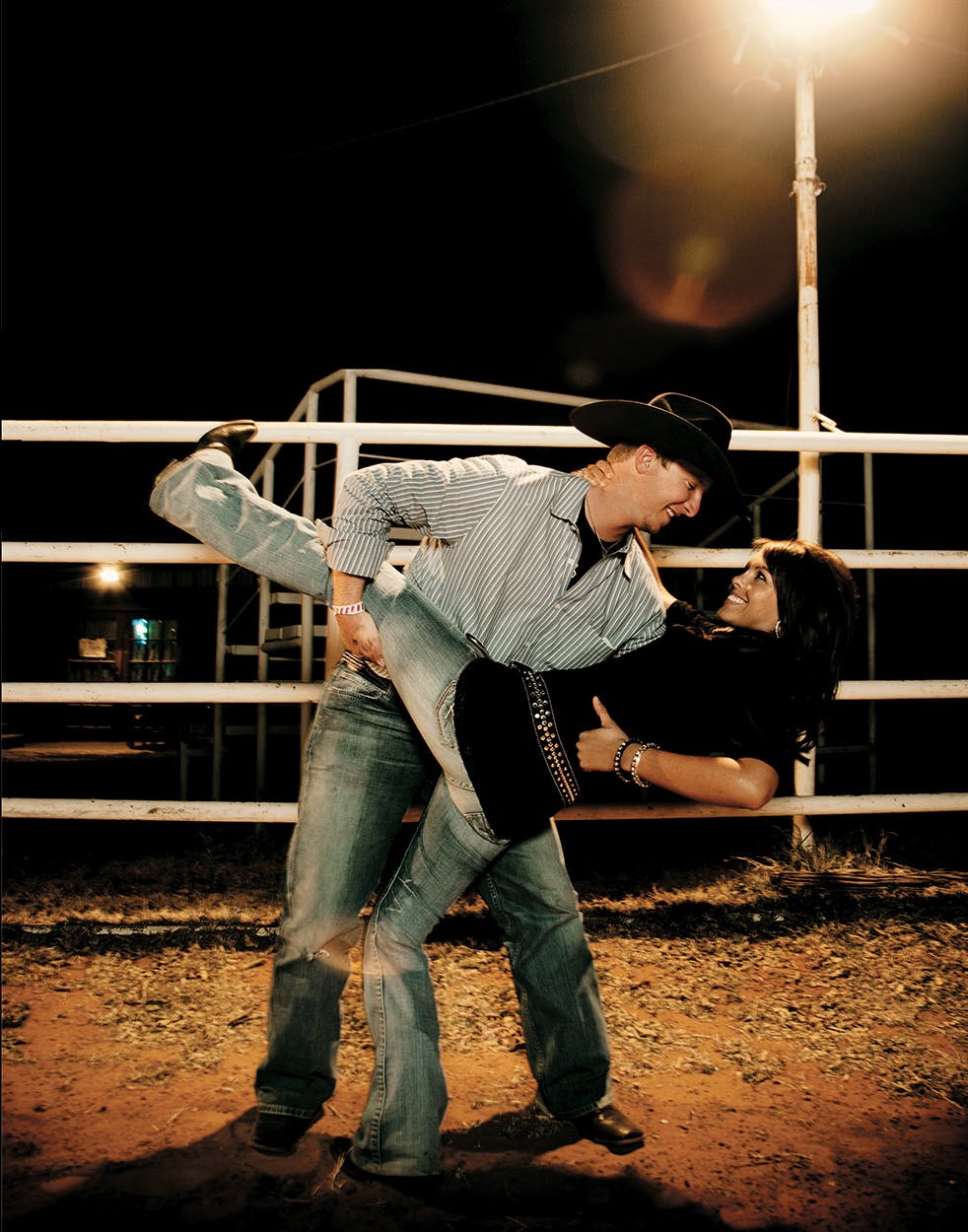 A cowboy hat, for me, is optional, so when I’m wearing one, it’s a pretty special night. My favorite thing in my closet is a pair of black lizard-skin, square-toed Ferrini boots. Kambri and I wear the same brand of boots. I’m not sure what that means, but I like it.
Kambri McReynolds, 22 It takes me about an hour to get ready to go out. I have to make my hair big, so I’ll curl it and spray it. My style is pretty simple, usually just jeans and boots, like the black lizard-skin Ferrinis I have on. I always wear a lot of big jewelry or an accessory, like this rhinestone B.B. Simon belt. 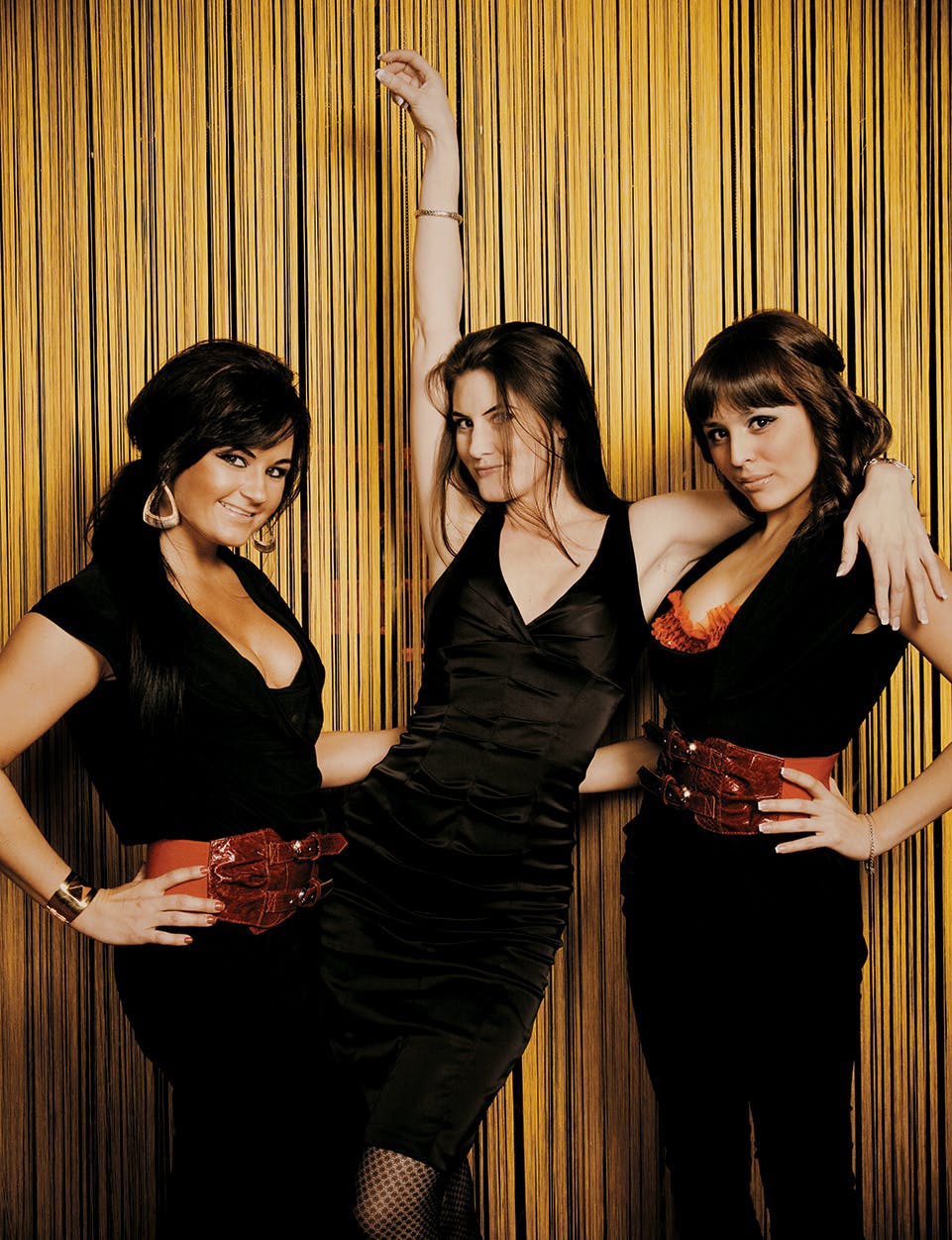 Our work uniform is this tunic-style dress by Abi Ferrin. It’s very versatile, since it has a cowl-neck that you can wear off the shoulder or make it low so you have cleavage. I like to match our red belt with a red sequin bra. The whole point is to look more attractive. When I’m going out with friends, I wear a lot of short dresses with black opaque tights or leggings and platform high heels. I don’t think I have the best legs, but when I wear a short dress with heels, I feel sexy. 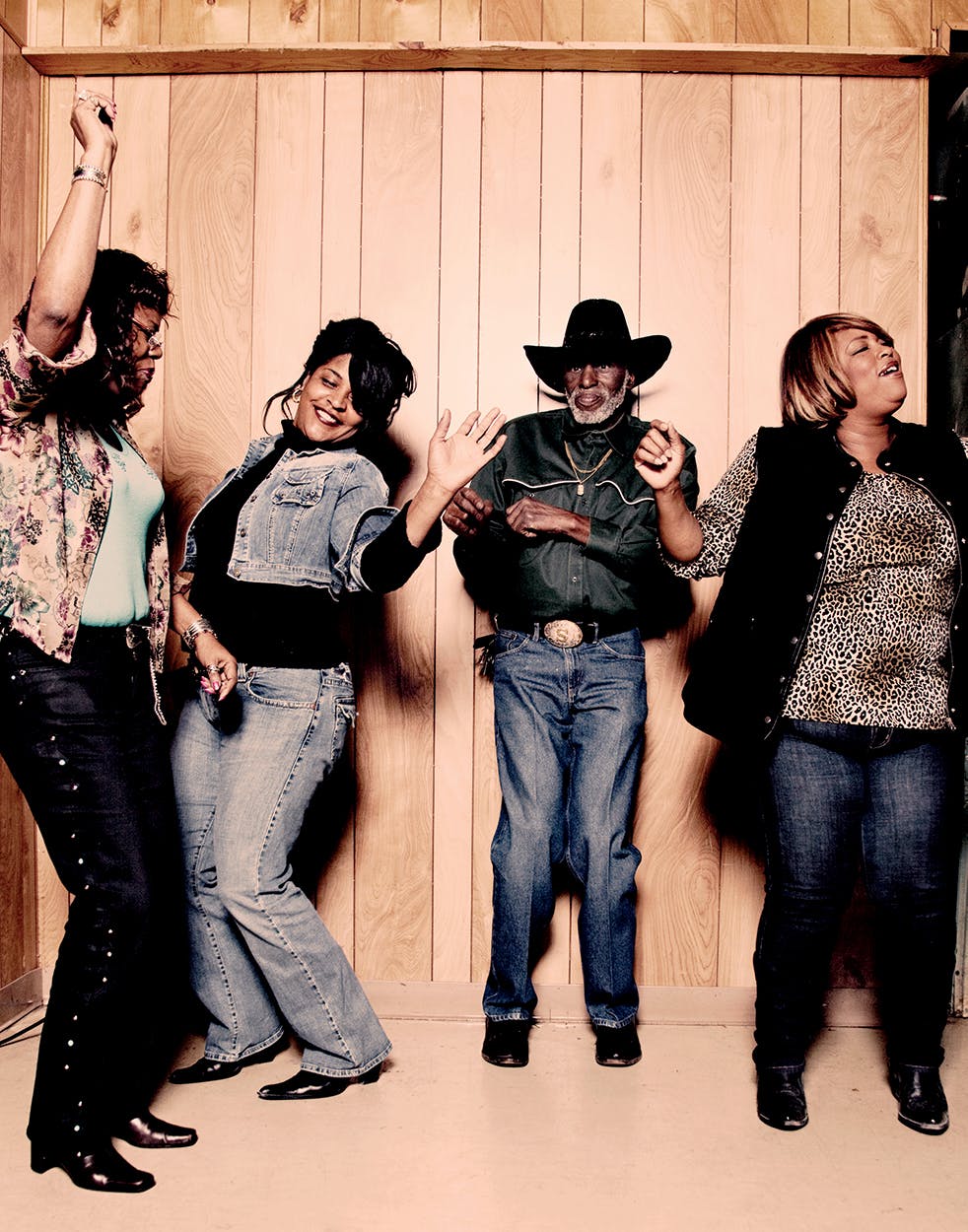 When you go dancing, you need to wear leather shoes so you’ll slide on the dance floor. When I go out, I wear my cowboy outfit: my cowboy shirt, my cowboy boots, my cowboy jeans—heavy starch on those—and my cowboy hat. Everything goes to the cleaners, even my hat, which I’ll take to get steamed and restyled. These ladies are my dancing buddies. I’m sure my friends will be jealous when they see this picture of me with them. 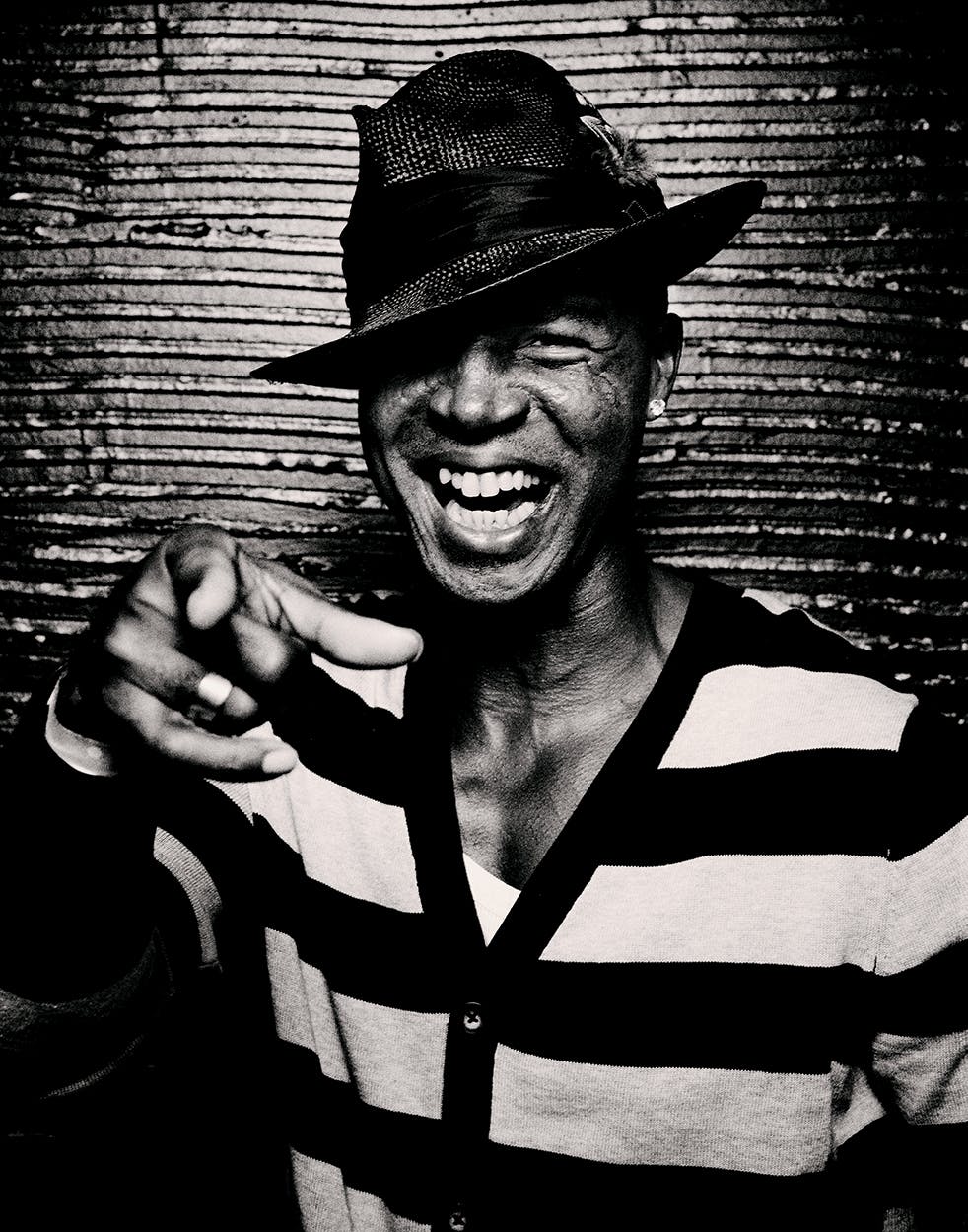 I pretty much know everybody at Shadow Bar. I like to be the person who’s making sure everyone’s having a good time. Hats are my thing. This one’s a Stacy Adams fedora. I also like to wear a tight-fitting shirt with jeans and a jacket. I might pop the collar if I’m feeling it. Everybody says I’m trying to be like Ne-Yo, but I’ve been dressing like this since before he came around.

Universal Studios Is Coming to Frisco. Here’s What We Want at the Park.

Welcome to Alphaland, the Disney World for Bodybuilders

By Texas Monthly
The Horse's Mouth

Requiem for a Roller Coaster